Minority Rights Group > Publications > The Jews of Africa and Asia

The Jews of Africa and Asia 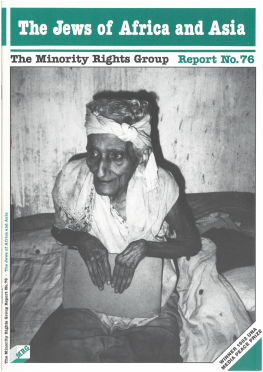 Jews have lived in the Muslim countries of the Near and Middle East and North Africa for millenia. Before 1948 and the establishment of the State of Israel more than one million Jews lived in these areas; today only about 5 per cent of this population remain there in their traditional homelands. The Jewish refugees from these areas, most of whom left because of anti-Jewish pressures of different sorts, have for the most part settled in Israel. As this brief description of disparate Jewish communities shows, anti-Jewish prejudice, of varying kinds and degrees, is still a force to be reckoned with in Muslim and other parts of Asia and Africa. Over the last hundred and fifty years, European Christian anti-Semitism has spread to many countries, chiefly to areas of the Islamic world where traditional social and religious attitudes towards Jews provided fertile soil for the new growth, but also to countries for instance in the East where Jews were virtually unknown. Although by no means all anti-Zionism is anti-Semitism, some clearly is and it can act as an effective conductor of, or breeding ground for, anti-Semitic prejudice. The spread of traditional Christian and Muslim anti-Semitism and the rise of anti-Zionism have placed many of the communities discussed here in jeopardy: certainly Jews in most Muslim countries face an uncertain future. It is a matter of continuing concern that anti-Semitism has continued to spread even to territories where Jews have never lived, and that such a potent contemporary force as anti-Zionism has played a hand in this development.