Minority Rights Group > Publications > Know your rights: A community guide to the UN Declaration on Minorities

Know your rights: A community guide to the UN Declaration on Minorities 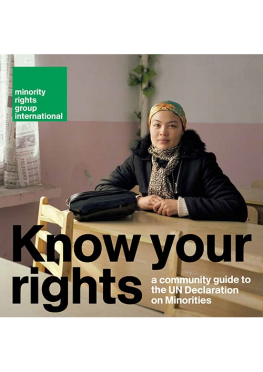 The year 2012 marks the 20th anniversary of the United Nations (UN) Declaration on the Rights of Persons Belonging to National or Ethnic, Religious and Linguistic Minorities. It was unanimously adopted by the UN General Assembly on 18 December 1992 and is the primary UN document dedicated to the rights of minorities.

Minorities throughout the world have benefited from the adoption of the Declaration as the international community recognized and codified their rights, and national governments took action to protect these rights. But there is still a long way to go in order to fully implement this historic Declaration.

This guide aims to celebrate the international recognition of minority rights and to help community activists protect their rights at the national and local levels. We hope this guide will promote awareness of the Declaration among minority communities and help ensure that more governments respect the principles that it contains.