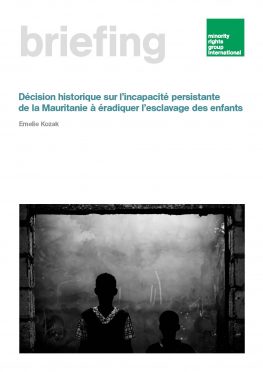 A new briefing by MRG looks into the background and implications of a groundbreaking ruling in an anti-slavery case in Mauritania.

Despite being banned by law, slavery and slavery-like practices remain widespread in the country, with thousands of people – most of whom belong to the marginalized Haratine ethnic group – still trapped in servitude.

In November 2011, in the first prosecution under the 2007 Anti-Slavery Law, Ahmed Ould El Hassine was found guilty of holding two brothers, Said and Yarg Ould Salem, in slavery and depriving them of schooling. Despite this apparent milestone, however, the sentences imposed were well below the minimum terms stipulated by the law and the slave master was subsequently released on bail just four months after his conviction.