Looma Ooyaan – No one cries for them: the situation facing Somalia’s minority women 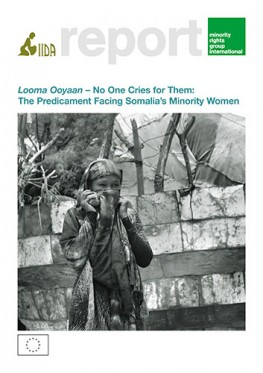 After decades of violence and instability, tentative progress is being made in Somalia to strengthen the country’s governance and democratic institutions. Yet one group in particular remains largely excluded – Somalia’s sizeable but unrecognized population of minority women. This report, Looma Ooyaan – No One Cries for Them: The Situation Facing Somalia’s Minority Women, explores in detail the double discrimination they face, both as minority members in Somalia’s hierarchical clan system and as women in a society dominated by men.

Though legal commitments to equality are in place across the different regions of Somalia, including Puntland and Somaliland, in reality minority women face constant marginalization and limited access to justice in the event of abuse or exploitation. Formal institutions, such as the police and judiciary, are often ineffective and may even actively discriminate against disadvantaged groups, particularly minorities and women. Similarly, the application of customary law – the primary source of protection for many Somalis – frequently fails to provide impartial and effective justice for women or minority clans. This leaves minority women especially vulnerable to violence, rape and other abuses. In addition, despite official commitments to more equitable participation, minority women are still mostly invisible in political decision-making, reflected in the continued failure to deliver adequate parliamentary representation for female representatives.

While Somalia’s minority women face unique challenges, their situation is also a reflection of the wider struggle to achieve peace and cohesion. While all too often excluded from peace settlements and other discussions about its future, Somalia’s transition from conflict and state failure to recovery and growth will hinge on the willingness of its leaders to promote lasting change for the country’s most disadvantaged populations. The situation of minority women should therefore be the concern of authorities in all regions of Somalia, the international community and all stakeholders committed to supporting lasting stability. Taking steps to address their exclusion will not only help remedy the country’s deep-seated gender and clan inequalities, but also contribute to a broader process of reconciliation and respect among all Somalis – the surest path for a durable solution to the decades of conflict that have blighted the country.

Empowering minority women to play an equitable role in Somalia will involve a complex and long-term process of social transformation. In the immediate term, protection concerns for minority women, particularly sexual and gender based violence perpetrated by militias, armed forces and members of majority clans as well as men from their communities, must be urgently prioritized to ensure their safety and dignity. This will require not only institutional reform and capacity building by Somalia’s police, military and judiciary, but also a broader process of social transformation to tackle the underlying discrimination that enables these abuses.