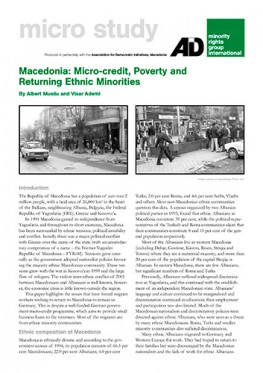 The Republic of Macedonia has a population of just over 2 million people, with a land area of 26,000 km2 in the heart of the Balkans, neighbouring Albania, Bulgaria, the Federal Republic of Yugoslavia (FRY), Greece and Kosovo/a.

In 1991 Macedonia gained its independence from Yugoslavia and throughout its short existence, Macedonia has been surrounded by ethnic tensions, political instability and conflict. Initially there was a major political conflict with Greece over the name of the state (with an unsatisfactory compromise of a name – the Former Yugoslav Republic of Macedonia – FYRoM). Tensions grew internally as the government adopted nationalist policies favouring the majority ethnic Macedonian community. These tensions grew with the war in Kosovo/a in 1999 and the large flow of refugees. The violent inter-ethnic conflict of 2001 between Macedonians and Albanians is well known, however, the economic crisis is little known outside the region.

This paper highlights the issues that have forced migrant workers wishing to return to Macedonia to remain in Germany. This is despite a well-funded German government micro-credit programme, which aims to provide small business loans to the returnees. Most of the migrants are from ethnic minority communities.