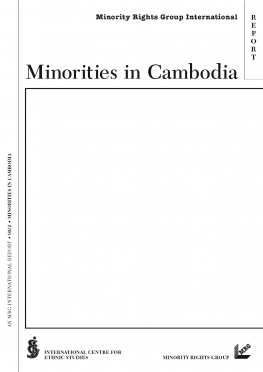 Twenty years on from the start of Pol Pot’s regime Cambodia has a democratically elected government that is recognized the world over. However, the issue of Cambodia’s minorities has been largely ignored in the new constitution – leaving many potentially stateless.

Minorities in Cambodia is a collaborative project between MRG and the Sri Lankan based International Centre for Ethnic Studies (ICES). The report traces the various regimes actions towards the Cham, the Khmer Loeu, the ethnic Chinese and the ethnic Vietnamese communities.

Cambodian minorities’ histories are complex: prior to Pol Pot only the Cham and the indigenous peoples of the Khmer Loeu were classed as Cambodian minority groups, yet the ethnic Chinese and Vietnamese, who have been living in Cambodia for centuries, were considered, and are still considered as ‘foreign residents’, with the Vietnamese in particular suffering from brutal xenophobia, resulting in massacres and expulsions.

This report seeks to broaden the debate on the situation of Cambodia’s minority groups and calls for the issues of residency and citizenship to be placed firmly on the new Cambodian government’s political agenda.