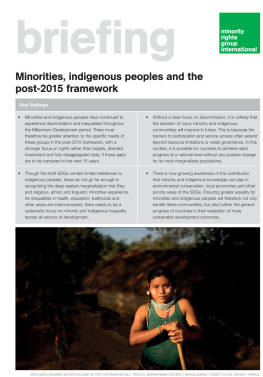 Though the fifteen years of the Millennium Development framework have seen some positive progress in areas such as health and education, minorities and indigenous peoples have often been excluded from these benefits. This short information pack, Minorities, Indigenous Peoples and the Post-2015 Framework, outlines the continued shortfalls affecting these communities and the opportunities for these disparities to be addressed in the Sustainable Development Goals (SDGs).

As the briefing argues, there must be greater attention to the specific needs of minority and indigenous communities, with a stronger focus on rights rather than targets, directed investment and fully disaggregated data. As inequalities in health, education, livelihoods and other areas are interconnected, there needs to be a systematic focus on minority and indigenous inequality across all sectors of development.

Without a clear focus on discrimination, it is unlikely that their situation will soon improve. For these groups, the barriers to participation and service access often extend beyond resource limitations or weak governance. In this context, it is possible for countries to achieve rapid progress at a national level without any positive change for its most marginalized populations.

However, there is also growing awareness of the contribution that minority and indigenous knowledge can play in environmental conservation, local economies and other priority areas of the SDGs. Ensuring greater equality for minorities and indigenous peoples will therefore not only benefit these communities, but also support the general progress of countries in their realization of more sustainable development outcomes.