Minority Tribes in Botswana: the Politics of Recognition 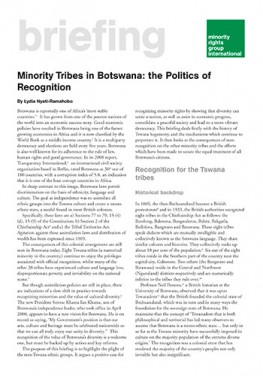 A4, 16pp, ISBN 978-1-904584-83-4
Botswana is reportedly one of Africa’s ‘most stable countries.’ It has grown from one of the poorest nations of the world into an economic success story. Good economic policies have resulted in Botswana being one of the fastest growing economies in Africa and it is now classified by the World Bank as a middle income country. It is a multiparty democracy and elections are held every five years. Botswana is also well known for its adherence to the rule of law, human rights and good governance.

But in sharp contrast, Botswana laws permit discrimination on the basis of ethnicity, language and culture. Eight Tswana tribes (a numerical minority in the country,) enjoy the privileges associated with official recognition, whilst many of the other 38 tribes have experienced culture and language loss, disproportionate poverty, and invisibility on the national scene.

This briefing highlights the plight of the non-Tswana ethnic groups. It argues a positive case for recognizing minority rights by showing that diversity can unite a nation, as well as assist in economic progress, consolidate a peaceful society and lead to a more vibrant democracy.