Minority Rights Group > Publications > Mosul after the Battle: Reparations for civilian harm and the future of Ninewa

Mosul after the Battle: Reparations for civilian harm and the future of Ninewa 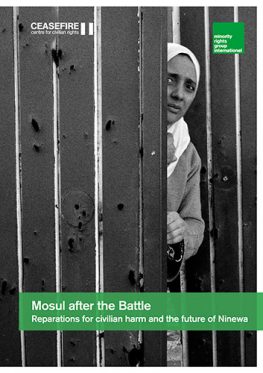 Mosul, a metropolis of 1.5 million people, served as the capital of the self-proclaimed caliphate of the Islamic State of Iraq and al-Sham (ISIS) for some three years. On 10 July 2017, after nearly nine months of intense fighting between ISIS, the Iraqi Security Forces, and their allies, the city of Mosul was declared liberated. While ISIS was responsible for a litany of crimes against the population of the city during its occupation, the military campaign to recapture Mosul also saw violations against civilians carried out by the Iraqi government, the international coalition supporting it, and pro-government militias. The intensity and length of the battle left much of the city reduced to rubble and caused thousands of civilian casualties.

It is a basic principle of international law that reparation is to be made for internationally wrongful acts. The duty to provide individual reparations is well-established today under international human rights law, and increasingly under international humanitarian law. So far, the responsibility for providing reparations to civilians has primarily been assumed by the Government of Iraq, under Iraq’s Law 20 on ‘Compensating the Victims of Military Operations, Military Mistakes and Terrorist Actions’. For civilians, compensation from the Government of Iraq is more than just an amount of money received, but a symbolic recognition of the impact of war on their life, and an instrument to start rebuilding their communities.

When it was drafted in 2009, Law 20 was conceived as an extraordinary measure to fill a gap in Iraqi legislation. However, due to the massive number of victims during the ISIS occupation and the level of destruction in Mosul and Ninewa Governorate, the numbers of people submitting compensation claims has drastically increased. With many public services still not completely functional and many administrative files lying under the rubble of the city, compensation is a complex administrative journey for civilians. Marred by a cumbersome procedure, the national mechanism set up by Law 20 is overloaded. With over a year and a half of delays in the processing of claims, many civilians have had to rely on their own means to begin rebuilding their lives.

Consequently, although Iraqi civilians can obtain some level of compensation from their government, they do not have access to full reparation. Despite its merits, the Law 20 framework contains significant gaps. While it covers physical harm and property damage, it does not address psychological harm or enable victims to access mental health care. It is silent on many categories of violations that occurred as part of the recent conflict, providing little recourse to child soldiers and victims of torture and enforced disappearances, for example. It also fails to recognize the systematic and targeted nature of the crimes perpetrated against Iraqi minority communities, or to provide symbolic or collective reparations. Moreover, it does not adequately acknowledge the full responsibility of the Iraqi government and the US-led international coalition for violations against civilians. Despite playing a decisive role in the conflict, the international coalition now risks ignoring the widespread suffering caused in recapturing ISIS-held territory and the level of resentment to which that may give rise.

The current report focuses on Mosul, as Iraq’s second city and the epicentre of the war against ISIS. Mosul’s diversity and its centrality in the conflict make it a testing ground for the future of transitional justice in Iraq. Civilian reparations are an essential component in reconciliation and recovery after conflict. How they are implemented in Ninewa will be a key indicator of the post-conflict future of the governorate and of Iraq as a whole.