A narrowing space: Violence and discrimination against India’s religious minorities 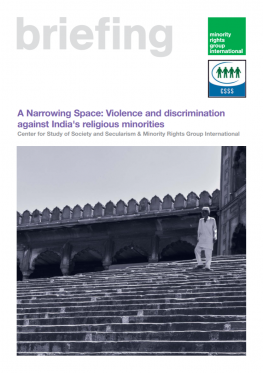 Religious minorities have long been the target of a range of different forms of persecution, such as hate crimes, threats, attacks on places of worship, and forced conversion. Nevertheless, in recent years there has been rising hostility against India’s religious minorities, particularly since the current right-wing BJP government promoting Hindu nationalism took power at the national level after its election in May 2014.

In particular, communal violence disproportionately affects India’s religious minorities – especially Muslims, but also Christians and Sikhs. While often instrumentalized for political gains, communal violence draws on and exacerbates a climate of entrenched discrimination against India’s religious minorities, with far-reaching social, economic, cultural and political dimensions. Such violence is frequently met with impunity and in certain instances direct complicity from state actors, ranging from inciting violence through hate speech to refusing to properly investigate communal incidents after they have occurred.

The aim of this short briefing is to contextualise these recent developments, drawing attention to the ways communal violence is linked to wider discrimination against religious minorities, and infringes upon their enjoyment of minority rights.

Find out more by visiting our new online map, an interactive tool depicting incidents of communal violence that have taken place across India between 2013-2016, based on official statistics from the Ministry of Home Affairs. The shading of each state represents its place on a scale, with states shaded a darker colour indicating higher incidence of communal violence for the entire period. Clicking on a state reveals information on the number of incidents of communal violence and related injuries and deaths per year, as well as details regarding the demography of the state. Also included is an icon denoting whether the state has anti-conversion or anti-cow slaughter laws in place, given the increasing role such legislation has in inciting vigilante violence along communal lines in India.