Minority Rights Group > Publications > Networks for peace: A case of the Basongora and Batuku Minority Communities in Rwenzori Sub-region in Uganda

Networks for peace: A case of the Basongora and Batuku Minority Communities in Rwenzori Sub-region in Uganda 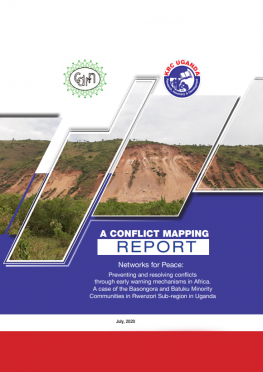 This conflict report was produced by MRG partners in the framework of the programme ‘Network for Peace: Preventing and Resolving conflicts through Early Warning Mechanism in Africa’ currently being implemented in Kenya, Uganda and Cameroon. In Uganda, the project is being implemented in Kasese and Ntoroko districts located in the Rwenzori Sub Region of Western Uganda by Community Development Resource Network (CDRN) and Kabarole Research & Resource Centre (KRC), respectively in Ntoroko and Kasese Districts.

The objectives of the mapping study were to establish existing conflict triggers, indicators, early earning and response mechanisms and the associated challenges in addressing conflict among the minority communities in Ntoroko and Kasese districts. Consultations were made through focus group discussions and key informants interviews with different stakeholders, including the target communities, local government leaders at the district, sub-county and lower levels, and religious and cultural leaders.