Minority Rights Group > Publications > No escape from discrimination: minorities, indigenous peoples and the crisis of displacement

No escape from discrimination: minorities, indigenous peoples and the crisis of displacement 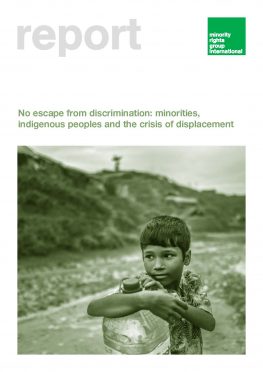 The world is currently going through an unprecedented era of migration, with tens of millions of people moving to new cities, countries and continents every year. But though the decision to move can be driven by the search for opportunities and a better life, in many cases violence, persecution and other human rights abuses are the primary causes of migration. This is especially the case for minorities and indigenous peoples, who in the context of widespread discrimination can face a distinct experience of migration where their own agency is severely curtailed – one often characterized by further discrimination as entrenched patterns of exclusion are replicated elsewhere.

This report, No Escape from Discrimination: minorities, indigenous peoples and the crisis of displacement, focuses specifically on the situation of minorities and indigenous peoples subjected to this form of forced migration, including its causes, impacts and potential solutions.

Though the most direct and visible examples arise from the mass displacement of particular ethnic or religious communities due to sectarian violence, migration of minorities and indigenous peoples can also result from broader factors such as natural disasters or exclusion. In particular, the report focuses on four key areas – conflict, climate change, nationalism and land rights – where forced displacement among minority and indigenous communities is playing a decisive role in their ability to enjoy their most fundamental human rights.

The report, while calling for a number of positive steps to protect vulnerable communities and provide the means for safe return or resettlement elsewhere, also highlights how displacement is generally the culmination of a protracted process of exclusion that leaves minorities and indigenous peoples particularly vulnerable to eviction, ethnic cleansing and other abuses. Establishing stronger rights protections for all, including minorities and indigenous peoples, rather than building walls or restricting travel, is therefore the only effective way to respond to the reality of displacement and provide a long-term solution to the crisis currently unfolding for these groups.