Preventing Genocide and Mass Killing: The Challenge for the United Nations (December 2006) 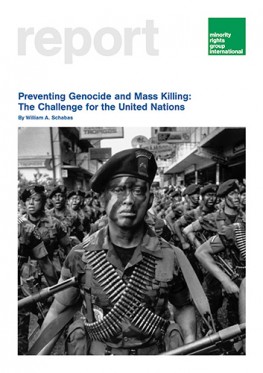 If the recommendations from the United Nations (UN) summit 2005 Outcome Document are acted upon, significant positive benefits in the UN’s ability to deal with genocide and mass killing could result.

The document says that each state has the responsibility to prevent genocide, whether this is through humanitarian or diplomatic action, or whether through recourse to the Security Council if peaceful means are inadequate.

The author, Prof. William A. Schabas, discusses the shifts that have already taken place in terms of the centrality or otherwise of human rights in the UN system. He argues that the UN used to be preoccupied with state rather than human security, and that while recent proposals within the UN are positive, that much remains to be done.

As the position of human rights has evolved within the UN so has the understanding of the strong links between the protection of minority rights and the prevention of conflict, mass killing and genocide.

The report looks at the protection afforded to minorities facing potential genocide by international law and UN mechanisms, how the understanding of genocide within the UN and international law has changed, and what has been learnt though international tribunals in the former Yugoslavia and Rwanda, and through cases coming to the International Criminal Court.

Preventing Genocide and Mass Killing: The Challenge for the United Nations states that the prevention of genocide is one of the most important roles for the UN. To this end, it offers a series of guiding principles in the understanding of genocide and mass killing, and a set of recommendations to strengthen genocide prevention within the UN, especially in light of the proposed changes to the UN system.