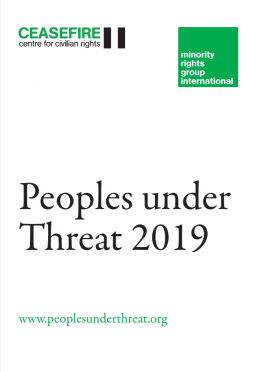 In many parts of the world, wide-ranging atrocities and other human rights abuses continue to threaten populations, especially those belonging to minority groups and indigenous peoples. As the reach of social media grows ever more pervasive globally, so too does its impact in contexts where genocide, mass killing, or systematic violent repression have occurred or there is a risk of such things taking place. The country situations at the top of the 2019 Peoples under Threat index illustrate how, in case after case, social media is playing a major role in encouraging the killing. Social media platforms now occupy a central role in stigmatizing target groups, legitimizing violence and recruiting the killers.

Peoples under Threat identifies those country situations around the world where communities face the greatest risk of genocide, mass killing, or systematic violent repression. Based on current indicators from authoritative sources Peoples under Threat has been compiled every year since 2005 to provide early warning of potential future mass atrocities.

View the online Peoples under Threat map or download the full briefing below.

Filed Under: Peoples under Threat