Discrimination against Roma in Croatia and Bulgaria: A comparative report 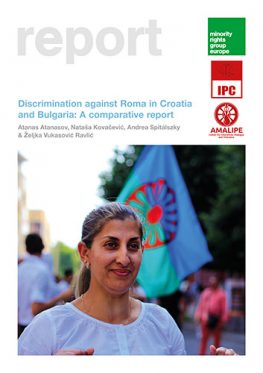 Discrimination against Roma manifests itself in various ways in Bulgaria and Croatia. This comparative report summarises and analyses the findings of two pieces of research, comprised of focus group interviews and desk research, which were conducted in the framework of the ERELA project. The aim of the research was to map different areas of discrimination against the Roma and to identify the obstacles to their access to justice. The aim of this report is to summarise the findings of the empirical and desk research and to provide a comparative overview of the situation of Roma in Croatia and Bulgaria.

Segregation in education is still common, many Roma are rejected during hiring procedures on the basis of a variety of different excuses, and a high percentage of the Roma population live in poor housing conditions in segregated and remote areas. Roma women are particularly vulnerable and often suffer multiple discrimination, especially in education, access to health care and employment. Furthermore, the Covid-19 pandemic has disproportionately affected the Roma population in both countries. The reasons behind discrimination are often prejudice, stigma and antigypsyism, which often manifests in hate speech, protests and even physical violence against Roma.

National equality bodies play an important role in the promotion and protection of the rights of victims of discrimination. However, most instances of discrimination against Roma go unreported in both countries due to distrust in state institutions, lack of knowledge about the available legal remedies and fear of the consequences. Training of legal practitioners, judges, prosecutors, civil servants, local and regional government employees, and police officers on antidiscrimination legislation would be crucial to ensure that they do not commit discrimination themselves and provide support for victims of discrimination.

Although in both countries there are various national strategies in place to combat discrimination against Roma and to ensure their social inclusion, in Croatia the actions of the different institutions responsible for their implementation are often not coordinated, and data collection and monitoring of implementation are inadequate, while in Bulgaria, implementation of the Roma strategy mainly lies with state institutions while Roma citizens are not actively involved in it.

The download links for the English and Bulgarian versions of the report are available below. A Croatian version will be published and launched on 21 October 2021 at an official launch event organised with our local partner.