Roma in Hungary: The Challenges of Discrimination 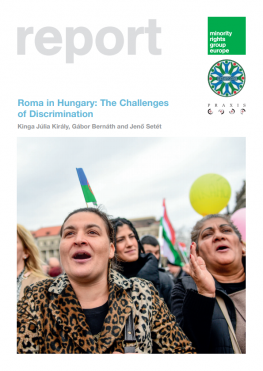 Research in recent years has shown that Roma in Hungary suffer substantial disadvantage in all areas of their daily life. The problems faced by Roma women and children are particularly severe, given that they are among the most vulnerable and the targets of most human rights violations within the community.

The Hungarian government is also aware of such social segregation, and it is precisely for this reason that national development strategies were drawn up. However, in many cases, the measures are not well focused, missing the target group and frequently failing to reach the most deprived communities.

In addition to widespread poverty, the other area where Roma children suffer the most is school segregation. In segregated schools — besides the fact that the mere existence of purely Roma classes, let alone schools, is discriminatory — the required staffing and resources are not available, either. The chances of children receiving education in these schools to progress on to further education are extremely low, which then adversely affects future generations on the labour market. Roma children are also overrepresented when it comes to interventions relating to social services, with disproportionate numbers taken from their families into foster care; reinstating them in their home is challenging, long-drawn-out and often overlooked by government stakeholders.

In disadvantaged regions of the country the only opportunity to work is through public employment programmes, where Roma are also overrepresented. Given that public employment programmes are organized by local governments, instances of discrimination experienced in this area are often not reported by the victims, for fear of losing their benefits. Roma women are discriminated across a range of situations, from employment to healthcare, both for being females and for belonging to the Roma community. Finally, housing discrimination, from segregated villages to ghettoized settlements in cities which do not meet even the most basic living standards, underscores many other discriminatory practices.

Based on community interviews with focus groups, the experience of everyday prejudices widespread, regardless of residence, segregation, education or social status. In each group, participants emphasized that the media has a serious responsibility for the discriminatory attitudes of the majority. In the interviews there were several complaints about labour- and healthcare-related problems, as well as issues involving police proceedings and education; and there was a consensus among the civil society focus groups that the coronavirus pandemic had led to increased discrimination. Roma women, primarily the younger individuals, are particularly vulnerable to discrimination in maternity and gynaecological wards. In two locations, the reluctance of the local authorities to take any action illustrates how serious the problems are in the operation of the local governments, and also reveals that, due to their vulnerability, people cannot be expected to enforce any change in such matters by themselves, without the help of effective organizations.