Minority Rights Group > Publications > Roma in the Republic of Serbia and Hungary: The Challenges of Discrimination – A Comparative Report

Roma in the Republic of Serbia and Hungary: The Challenges of Discrimination – A Comparative Report 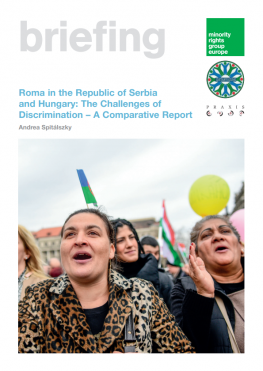 This comparative report summarizes and analyzes the findings of two pieces of research which were conducted in the framework of the REILA project, coordinated by Minority Rights Group Europe with the participation of two partners – Praxis in Serbia and Idetartozunk (We Belong Here) in Hungary. The respective findings were published in two separate country reports. The aim of the research was to map different areas of discrimination against Roma and to identify the obstacles to their access to justice. The research was carried out in both countries from October to December 2020. During this period, various focus group interviews were organized in both countries with the participation of Roma men and women, Roma activists and civil society organizations (CSOs), and legal practitioners. The empirical research was completed with a review of the findings of the existing research data from previous years. The aim of this report is to summarize the findings of the studies and to compare the situation of Roma in the two neighbouring countries.

A significant Roma population has been settled for centuries in both countries. In Serbia, according to the latest census in 2011, 147,604 people identified themselves as Roma. However, according to other sources, their actual number is significantly higher. According to research conducted at the beginning of the 21st century, there were 201,353 Roma who had Serbian citizenship and 46,238 Roma who had been displaced from Kosovo. Some sources even indicate that the Roma population may reach 800,000.

In Hungary, according to research conducted in 2017, the Roma population is around 876,000, comprising approximately 9 per cent of the total population. This is significantly higher than the 2011 census, when only around 316,000 people identified themselves as Roma – although that figure was itself approximately double the number of people who had declared themselves Roma in the census ten years earlier.

Consequently, the data shows that in both countries the Roma population is significantly higher than the official census statistics. One reason for this uncertainty is the reluctance of some Roma to openly self-identify as such: research conducted in 2017 in Hungary shows that people’s willingness to identify themselves as Roma depends on the degree of discrimination and stigmatization they experience. It is therefore of utmost importance to know the exact number of the Roma population in both countries to design appropriate strategies for their social inclusion and to combat discrimination.