Six months on: End of the war brings no respite and little hope for Sri Lanka’s minorities 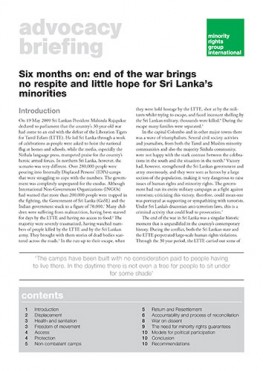 On 19 May 2009 Sri Lankan President Mahinda Rajapakse declared to parliament that the country’s 30-year-old war had come to an end with the defeat of the Liberation Tigers for Tamil Eelam (LTTE). He led Sri Lanka through a week of celebrations as people were asked to hoist the national flag at homes and schools, while the media, especially the Sinhala language press, trumpeted praise for the country’s heroic armed forces. In northern Sri Lanka, however, the scenario was very different. Over 280,000 people were pouring into Internally Displaced Persons’ (IDPs) camps that were struggling to cope with the numbers. The government was completely unprepared for the exodus. Although International Non-Government Organizations (INGOs) had warned that more than 200,000 people were trapped in the fighting, the Government of Sri Lanka (GoSL) and the Indian government stuck to a figure of 70,000. Many children were suffering from malnutrition, having been starved for days by the LTTE and having no access to food. The majority were severely traumatized, having watched numbers of people killed by the LTTE and by the Sri Lankan army. They brought with them stories of dead bodies scattered across the roads. In the run-up to their escape, when they were held hostage by the LTTE, shot at by the militants whilst trying to escape, and faced incessant shelling by the Sri Lankan military, thousands were killed. During the escape many families were separated.