State of the World’s Minorities 2007 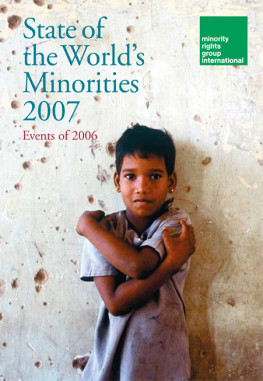 In 1948, the United Nations General Assembly adopted the Universal Declaration of Human Rights, which proclaimed that ‘all human beings are born free and equal in dignity and rights’. Sadly, for many minorities and indigenous peoples around the world, this inspirational text – with its emphasis on equality and non-discrimination – remains a dream, not a reality.

Ethnic or sectarian tensions are evident in many parts of our globe. In places, they have boiled over into bitter violence. The Middle East situation continues to deteriorate – with some minority communities fearing for their very survival. In Africa, the crisis in Darfur is deepening, as government-sponsored militia continue to carry out massive human rights abuses against traditional farming communities. In Europe, the spotlight has fallen on Muslim minorities – with rows flaring over the Danish cartoons and the wearing of the veil and burqa.

The State of the World’s Minorities is an invaluable reference for policy-makers, academics, journalists and everyone who is interested in the conditions facing minorities and indigenous peoples around the world.

Filed Under: Publications, State of the World's Minorities and Indigenous Peoples