State of the World’s Minorities 2008 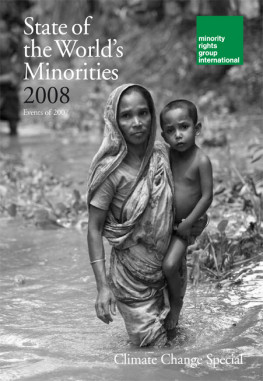 In 2008, Minority Rights Group will mark 40 years of working with minority and indigenous communities around the world. Progress has been made, but much remains to be done. New challenges are emerging. In 2007, climate change raced up the international agenda. Many minority communities are already bearing the brunt of extended drought, rising water levels or the planting of biofuel crops to combat global warming. As policy-makers develop strategies to cope with climate change, it is vitally important that the rights of minorities are taken into account.

The ‘war on terrorism’ continues to impact adversely on minorities, in countries as diverse as China, Pakistan, the Philippines, Somalia and Sri Lanka. Ethnic conflict is spreading in Central Africa, the deadly consequences of the unresolved Darfur crisis. Afro-descendant communities in many Latin American countries face deeply entrenched racism. The Roma minority in Europe often faces discrimination in accessing basic social services, such as housing, education and health. This third annual edition of State of the World’s Minorities looks at these and other issues affecting the human rights and security of ethnic, religious or linguistic minorities and indigenous peoples. It includes:

State of the World’s Minorities is an invaluable reference for policy-makers, academics, journalists and everyone who is interested in the conditions facing minorities and indigenous peoples around the world.