State of the World’s Minorities and Indigenous Peoples 2011 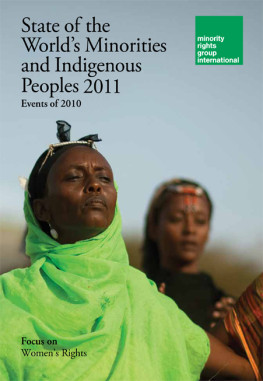 In the year that saw the establishment of UN Women, the new United Nations entity for gender equality and women’s empowerment, minority and indigenous women continued to face violence, discrimination and marginalization, stemming both from their identity as women and as members of disadvantaged minority groups. In Latin America, despite the election of women as heads of state in several countries, African descendant and indigenous women remain virtually invisible in public and political life. They are also the population group that has borne the brunt of armed conflict in the region, subjected to rape and sexual violence. As elsewhere, they have little hope of redress against those who assaulted them. In Europe and Oceania, migrant women face economic and social marginalization, and are often unable to access support services because of their immigration status, leaving them trapped in abusive relationships.

In 2010, women belonging to Muslim minorities in the global North choosing to wear the face veil also faced increasing pressure, with bans under discussion in many countries. In the Middle East and Africa, minority and indigenous women continue to be subjected to religious and customary legal systems that deny them their rights, while Iraqi refugee women (many of whom belong to religious minorities) elsewhere in the Middle East are increasingly vulnerable to trafficking and sexual exploitation. In Asia, sexual violence against women has again been used as a weapon against minority women, while land seizures are resulting in further economic marginalization of indigenous groups.

This year’s edition of State of the World’s Minorities and Indigenous Peoples presents an overview of the situation of minority and indigenous women today, and includes:

Filed Under: Women, State of the World's Minorities and Indigenous Peoples