State of the World’s Minorities and Indigenous Peoples 2014 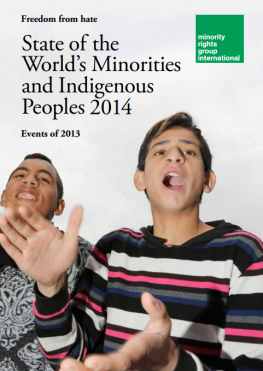 Across the world, minorities and indigenous peoples are disproportionately exposed to hatred. From intimidation and verbal abuse to targeted violence and mass killing, this hatred often reflects and reinforces existing patterns of exclusion. The impacts also extend beyond the immediate effects on individual victims to affect entire communities – in the process further marginalizing them from basic services, participation and other rights.

This year’s edition of State of the World’s Minorities and Indigenous Peoples highlights how hate speech and hate crime, though frequently unreported or unacknowledged, continue to impact on every aspect of their lives. The volume also documents many of the initiatives being taken to promote positive change and the different ways that governments, civil society and communities can strengthen protections for minorities and indigenous peoples.

Filed Under: Publications, State of the World's Minorities and Indigenous Peoples