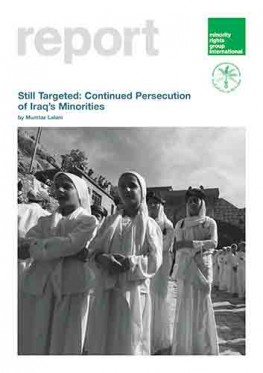 Despite moves towards greater pluralism in Iraq’s 2010 national parliamentary election, the conditions for minority communities of the country’s diverse population remain extremely distressing. Minorities there face frequent bombings, torture, arbitrary arrest, intimidation, displacement and marginalization. Meanwhile, minority women and children are frequently victims of human rights violations. The ongoing threat of violence has seriously restricted minority women’s freedom of movement and, in some cases, their right to express their religious and ethnic identity through the way they dress. These limitations in turn restrict their access to health services, education and employment.

While levels of displacement in Iraq have stabilized, the report identifies that an estimated 2.8 million people remain displaced. A significant number of those people displaced internally in Iraq since 2006 – almost 250,000 – represents minority populations, many fleeing due to attacks and intimidation. Internal displacement following violence in the run-up to the March 2010 elections has left those who have been displaced in critical need of humanitarian support.

The research for this report focuses on the Kurdistan Region; Kirkuk and Nineveh provinces in the north; and Baghdad, given the concentration of minorities in these areas. The report highlights that tensions between Kurds and Arabs over disputed territories in Kirkuk and Nineveh mean that they have become the most dangerous governorates in the country.

Despite the extent of the atrocities committed against minorities in recent years, there have been few investigations to identify the perpetrators of these attacks. In looking to solutions the report highlights the need for legislation implementing the minority rights enshrined in Article 125 of the Iraqi Constitution.