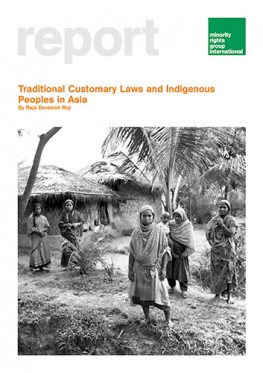 For years, traditional laws – or customary laws – in Asia have been eroded. This report argues that remaining customary laws should be retained and discusses the extent to which their erosion can be reversed.

Traditional Customary Laws and Indigenous Peoples in Asia focuses primarily on two types of customary law systems – personal or family law, and land and resource rights law – and considers the complex situation, which is far from uniform throughout Asia. For example, in some areas customary law systems and procedures are generally respected, while in other parts of Asia, customary law has been so eroded that it is virtually non-existent and unrecognized by governments. There are also many examples that fall between these two situations.

The author discusses the many challenges facing indigenous peoples in the pursuit of their customary law rights and many of the issues that have yet to be resolved within customary law systems. These include the occasional conflict between women’s rights and customary rights.

The report focuses on the situation in the Chittagong Hill Tracts of Bangladesh, as well as including numerous examples from the Cordilleras in the Philippines; Jharkhand, Mizoram and Nagaland in India; northern Thailand; and Sabah and Sarawak in Malaysia, among others.

Traditional Customary Laws and Indigenous Peoples in Asia is essential reading for indigenous peoples, non-indigenous government and political leaders and officials, staff of donor and development institutions and NGOs, and international bodies such as the United Nations.