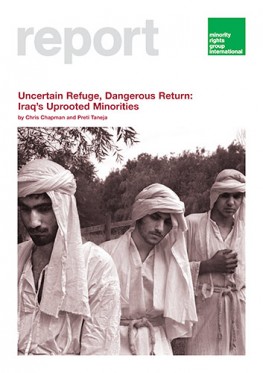 Since the start of conflict in Iraq in 2003, the country’s minorities have suffered disproportionate levels of targeted violence because of their religions and ethnicities. Inside Iraq they continue to suffer this violence. Outside, they form a large proportion of those displaced, either by fleeing to neighbouring countries or seeking asylum further afield. But as this report clearly shows: having passed Iraq’s borders is no guarantee of safety.

Asylum-seekers risk being turned back at the Greek border; if they continue into other member-states of the European Union they face increasingly restrictive asylum policies. For minorities the ramifications of this are stark. If rejected, they risk being sent back to Iraq. Dispersal policies which divide refugees of the same nationality between cities and towns have a serious impact on minority communities whose numbers may already be at the limits of sustainability. Such policies also ignore the needs of minorities, especially the need to maintain, as a community, their cultural identity and religious practices. There is also a tendency to ignore the plight of Muslim ethnic minorities in reporting and processing asylum claims.

Hear the Voices of Refugees

These films were made by independent filmmaker Ben Crowe and MRG in Sweden in August 2008. To view all 5 films and read a full synopsis, visit MRG’s YouTube Channel.

More about the report

Drawing on numerous first-hand interviews with Iraq’s minority communities across the Middle East and Europe, this report details the considerable difficulties they face in the struggle to gain safety. It highlights that, for many minorities, return to the extremely precarious existence they face in Iraq is an impossible prospect.

As asylum countries continue to use a combination of voluntary incentives and force to return Iraqi rejected asylum-seekers and refugees, this report offers an urgent analysis of the impact of such measures on minorities. It calls on the Government of Iraq and the international community to give greater consideration to the specific needs of Iraq’s religious and ethnic minorities in all matters of asylum, resettlement and return.