Minority Rights Group > Publications > Voices from the margins: including the perspectives of minorities and indigenous peoples in the post-2015 development agenda

Voices from the margins: including the perspectives of minorities and indigenous peoples in the post-2015 development agenda 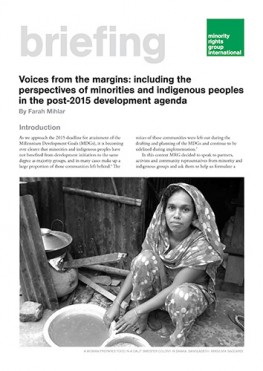 As we approach the 2015 deadline for attainment of the UN Millennium Development Goals (MDGs), it is becoming ever clearer that minorities and indigenous peoples have not benefited from development initiatives to the same degree as majority groups, and in many cases make up a large proportion of those communities left behind.

The voices of these communities were left out during the drafting and planning of the MDGs and continue to be sidelined during implementation.

In this context MRG decided to speak to partners, activists and community representatives from minority and indigenous groups and ask them to help us formulate a post-2015 development framework to ensure that minorities and indigenous groups benefit fairly from the international commitment to meet the MDGs.

This briefing captures the major development concerns for minority and indigenous communities – cultural development, security of land and natural resources, conflict and migration and youth unrest – issues which do not feature prominently in post-2015 discussions as yet. It also offers key recommendations for the post-2015: