Canada and the United States: The continued struggle of indigenous communities to defend their lands

Across North America, indigenous peoples are still affected by the traumatic legacy of displacement from their ancestral lands, a historic expropriation that continues to undermine their wellbeing, spirituality and way of life to this day. But despite a range of protections now in place to prevent further abuses, communities are still facing renewed threats from big business – and national governments are doing little to stop them.

For indigenous communities in Canada and the US, land, environmental protection and human rights are intrinsically linked: land is the foundation of their livelihood and spirituality. It is for this reason that colonization was such a detrimental force when Western powers seized ownership of land and drove indigenous peoples from their ancestral territories. In Canada and the US, early European peace treaties forced the surrender of vast areas of land, displacing tribes onto reservations – an act described by Judy Wilson, Chief of Neskonlith Indian Band, as the ‘biggest land grab in history’.

Today, however, many of these reservations face a new threat: corporate colonialism. Large extractive industries, through the building of gas and oil pipelines, could jeopardize their future. Use of land for these purposes is regarded by indigenous communities as theft, resulting in widespread environmental degradation and, in some cases, displacement of their communities. In many cases these developments have been met with indigenous resistance and protests that, at considerable personal peril to participants, have highlighted the dangers posed by the extractive industries to their homelands.

Standing Rock: the violent repression of the largest indigenous protest in living memory 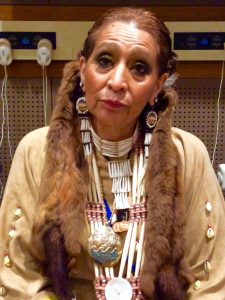 LaDonna Bravebull-Allard (left), a Lakota Elder activist and one of the founders of the Dakota Access Pipeline Protests at Standing Rock, managed to draw unprecedented global attention to the dangers of illegal development on indigenous territory. The Dakota Access Pipeline (DAPL) protests began in 2016, after the US government approved construction of a 1,886 km crude oil pipeline from North Dakota to Southern Illinois, which would be routed under rivers and sacred burial grounds on the Standing Rock Native Reservation.

The protests garnered international coverage and went on to become the largest gathering of Native Americans in the US in more than a century. Despite this success, however, the federal government largely ignored the demonstrations and a private security firm was hired to drive peaceful protesters out, using rubber bullets, water cannons and attack dogs. This weaponized response to peaceful protests left over 200 people wounded, some with life-altering injuries, while several other protesters are now in jail awaiting federal sentences.

‘Right now,’ says Bravebull-Allard, ‘we still have people in jail, going to court, people who will be facing federal charges. We have a list of the journalists and medics who were shot, we have people with permanent injuries from the mace, rubber bullets, grenades and water cannons.’

While many across the world supported the demonstrations at Standing Rock, the lasting injuries suffered by protesters and the continued risk of jail sentences for others have been largely overlooked by the mainstream media. With the Trump administration now pushing the pipeline’s development in the face of continued environmental concerns, Bravebull-Allard states that there may already have been oil leakages on her ancestral homeland.

Further north, in Canada, indigenous communities are facing a similar uphill battle against the political and corporate powers behind the Kinder Morgan Pipeline, a development that would carry crude and refined oil from Alberta to the West Coast of Canada for export to global markets. The project, despite court challenges filed from myriad indigenous peoples, has been approved by the federal government. First Nations representatives claim the government has not properly consulted the communities who would be most affected by the pipeline, in direct violation of the UN Declaration on the Rights of Indigenous Peoples (UNDRIP). 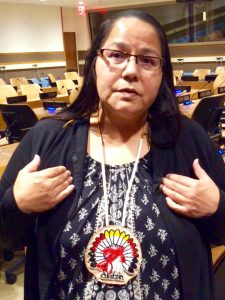 As highlighted by Chief Judy Wilson (left), the pipeline will go directly over Secwepemc land, home to some 10,000 people. ‘The Kinder Morgan approval by the federal government is the biggest contradiction yet in how they are implementing the UNDRIP and not respecting our human rights,’ she says. ‘In our interior nations we have not consented to the pipeline, the Secwepemc people have not sanctioned this project and Kinder Morgan has no consent from the Secwepemc people.’ Wilson criticizes the Canadian government for its ‘masquerading’ display on the global stage, explaining that on an international level they proclaim their commitment to indigenous peoples and free, prior and informed consent, but behind closed doors they are not true to their word. ‘They do not have our free, prior, and informed consent with Kinder Morgan, nor with our interior Secwepemc people, nor with many of the coastal nations – and that must stop. We are going to do whatever we have to do to uphold our stands, uphold our title, and uphold our rights.’

The violation of these rights is an area of particular concern for Secwepemc who, like other indigenous peoples in Canada, are still struggling with the legacy of their historic displacement from large swathes of their territory. These tensions have persisted in recent years as new developments have been constructed in territory traditionally belonging to the community, such as the controversial, multimillion dollar Sun Peaks ski resort approved in 1997 on Mount Morrissey, regarded by many Secwepemc as sacred land. The Kinder Morgan Pipeline therefore represents the latest chapter in a long process of displacement and dispossession.

Nestlé and the fight for water in Wintu territory 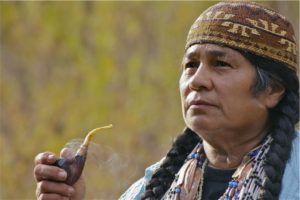 As Chief of the Winnemem Wintu tribe, along the McCloud River watershed in Northern California, Caleen Sisk (left) is a tireless activist on behalf of salmon restoration, water protection and the right to clean drinking water. She is also the Spiritual and Environmental Commissioner for ECMIA, an international network for indigenous women. She has been at the forefront of her community’s struggle to protect their precious natural resources from the attempts of Nestlé and other private corporations to bottle water on their land.

‘We have had the problem of Nestlé coming into some of our small mountain communities,’ says Sisk. ‘This impacts all people; when you tap into high mountain water sources, everything downstream is affected. This worries us because it affects our fish, it affects our drinking water and affects how much water gets to everything else that needs it. Whenever these water-bottling companies come in they contaminate half the water that used to be drinkable, they bottle the other half of the water and ship it to other parts of the world, and this water will not go downstream, and we do not get any of the water they are bottling. The rest is polluted.’

The McCloud River watershed is an area already struggling with drought, a situation only worsened by the activities of water-bottling companies on Wintu land. If this issue goes unaddressed, the lack of adequate clean water could in future lead to the forced displacement of the community. The tribe has therefore found itself locked in a continuous battle with corporations misusing their water sources, resulting in devastating impacts and severe environmental degradation to their sacred territories. While Chief Sisk and her community launched a successful legal action against Nestlé, another water-bottling business has taken its place: a lawsuit was issued against the company in question, Crystal Geyser, in April 2018 to challenge the approval of an industrial waste discharge permit to the company – a decision that Windu believe will lead to further contamination.

These case studies, spanning a number of different communities across North America, highlight the persistent difficulties that indigenous peoples face in ensuring their land rights are protected, despite the apparent progress made in recent years after decades of official discrimination, including displacement from their ancestral territories. Today, the depredation of land, water and forests by a wave of corporations, often with active government support, poses a profound threat not only to the future survival of these communities and their way of life, but also the fragile natural environments on which they depend.

As caretakers, gatekeepers and protectors of the earth and its resources, indigenous peoples in North America and elsewhere have valuable lessons to impart on the protection and conservation of the environment. ‘As indigenous people,’ says Bravebull-Allard, ‘we hold the last of the pristine land. We hold the last of the clean water.’ The encroachment on these reserves by big business is a concern not only for the communities affected, but all humanity. ‘As the corporations come in, whether for deforestation or oil or minerals, all the developments, they are taking the last of what is most precious. It’s not most precious to just indigenous people, it is to all people. We must be able to hold these areas for all people to live.’

Canada and US country profiles

United States: Against a backdrop of growing hostility, undocumented migrants in Oregon are taking a stand