Israel: An uncertain future for thousands of African asylum seekers caught between detention and deportation

Across the Middle East, thousands of sub-Saharan migrants – including workers stranded by conflict, asylum seekers fleeing violence and others attempting the dangerous journey to Europe – have become some of the region’s most vulnerable people, targeted by traffickers and militias alike. But in Israel, where for years a community of Eritrean and Sudanese asylum seekers has resided, their hopes of sanctuary are giving way to apprehension as nationalists seek to deport the so-called ‘infiltrators’ from the country.

Amid ongoing crisis and insecurity in sub-Saharan Africa, increasing numbers of asylum seekers have migrated in recent years to Israel through Egypt. More than 90 per cent of them originate from Eritrea and Sudan, both countries with deplorable human rights records: while Eritreans flee the oppressive rule of unelected President Isaias Afwerki and all the human rights abuses that come with a dictatorship, Sudanese seek to escape the continued violence in Darfur and the country’s deteriorating economic situation. The road to Israel is long and hard, with those making the journey suffering abuse, kidnapping, torture and extortion on the way to what many hope will be asylum. Women and girls are especially vulnerable, and many refugees die en route to Israel or other countries.

However, their reception in Israel has been far from welcoming. While Eritreans in particular receive high rates of refugee recognition in European nations, African asylum seekers in Israel are not afforded the same acceptance. Despite being a signatory to the UN Convention relating to the Status of Refugees, Israel has granted official refugee status to just 11 of the approximately 35,000 Eritreans and Sudanese in the country. Until early 2018, when the Israeli Supreme Court suspended the detention of asylum seekers until a clear pathway for voluntary resettlement was in place, more than 1,200 asylum seekers were being held in detention facilities. By then, large numbers of Eritreans and Sudanese had already been ‘voluntarily’ deported by being threatened with indefinite detention if they did not leave.

These issues were brought to the fore by the Israeli government’s announcement in January 2018 that tens of thousands of sub-Saharan African refugees would be paid a sum of US$3,500 each in exchange for leaving the country, with a free air ticket to their country of nationality or ‘third countries’ (though officially unconfirmed at the time, these were identified as Rwanda and Uganda). This move was condemned as illegal by the UN, who subsequently brokered an arrangement in April in which Israel agreed that some 16,000 sub-Saharan Africans could be resettled in Western countries while granting temporary residency to an additional 16,000 sub-Saharan refugees in Israel. This deal, however, was cancelled shortly afterwards by the Israeli government. At the time of writing, it remains unclear what the fate of thousands of sub-Saharan Africans in Israel will be. As the deals with Rwanda and Uganda also fell through, authorities are currently unable to undertake any further forcible deportations. Prime Minister Benjamin Netanyahu has threatened to reopen recently closed detention facilities where hundreds of asylum seekers had been incarcerated for months at a time.

These recent developments cannot be separated from the reality of widespread racism in Israel towards sub-Saharan Africans – most of whom are classified as ‘infiltrators’ by Israeli authorities. Even for those not currently detained, life is difficult, with tens of thousands concentrated in inadequate housing in marginalized areas of south Tel Aviv where they have also faced rising levels of hostility, including property destruction, egg-throwing, racist demonstrations and other forms of harassment. While this prejudice has been challenged by a broad and vocal response from civil society groups within Israel, others have used their positions of power to vilify the country’s African population. In March 2018, Netanyahu suggested that African migrants posed a greater threat to Israel than terrorist attacks from Sinai and, in the same month, the Sephardic chief rabbi of Israel, Yitzhak Yose, notoriously described black people as ‘monkeys’ in a public sermon.

For the significant numbers of sub-Saharan Africans already deported from Israel, the situation is even harder. Research conducted by NGOs on those previously deported to Rwanda and Uganda found that none had been granted residency on arrival, leaving them with an irregular status and thus at constant risk of being returned to their countries of origin. As a result, many of those already deported from Israel have chosen instead to take the dangerous migrant route through Libya and attempt to cross the Mediterranean into Europe – a journey which claimed an estimated 3,139 lives in 2017. While the exact origin of the majority (2,215) of these deceased individuals is unknown, of the 924 whose region of origin was recorded 823 were from sub-Saharan Africa. Interviews by UNHCR with refugees in Rome – who, after being deported from Israel, chose to make the difficult journey to Europe – have highlighted the violence, exploitation and abuses they experienced along the way, travelling through multiple conflict zones before risking their lives to reach Italy.

While thousands of sub-Saharan Africans remain in limbo in Israel, there have been few signs that attitudes among the nationalist right wing have softened. The lack of a resolution, as well as the prospect of further detention, leaves many with few opportunities to build their lives meaningfully after the trauma of fleeing the insecurity and chaos in their home countries. 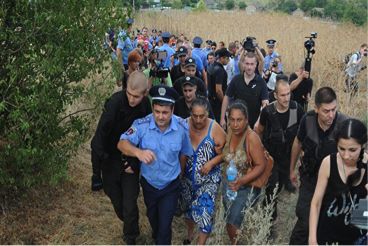 Jordan: The struggles of Bani Murra, one of Syria’s most marginalized communities, now displaced as refugees