Sri Lanka: The gentrification of Slave Island – A way of life under threat for Colombo’s Malay population

While much attention has focused on the decades-long civil war in Sri Lanka and the legacy of conflict, which formally ended in 2009, the country’s inequitable development since then has deepened discrimination against its under-served urban communities. This is especially the case for the country’s small Malay minority, many of whom are based in central Colombo and now face the threat of mass eviction from the historical area of Slave Island.

Brought in as soldiers by the Dutch and the British colonial administration starting from the mid-seventeenth century, the Malay population of Sri Lanka also descend from a smattering of political exiles from across the Indonesian Archipelago.

Although originally from various parts of the Archipelago, they were eventually all grouped under the common label ‘Malay’ by the British Administration System to simplify its processes, and thus the recording of the original ethnicities of these Javanese peoples was lost. Many places named after Malays in Sri Lanka have also lost their original connotations over time, as the people who marked them slowly assimilated into the local population. The Malay population, which in 2012 consisted of just over 40,000 people (0.2 per cent of the country as a whole), is now struggling to keep its numbers up. 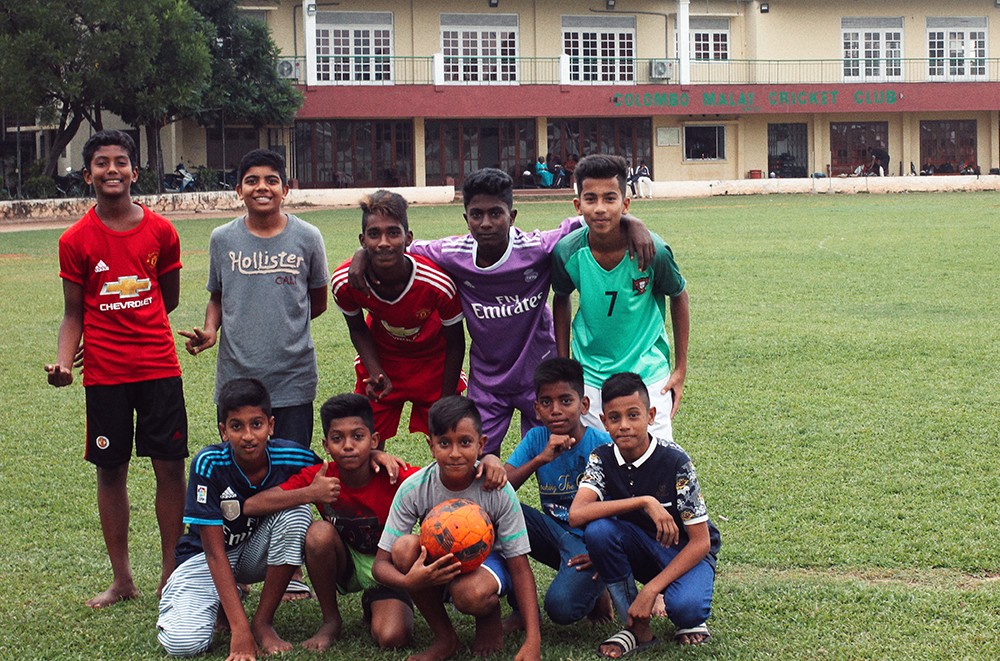 Boys pose for a picture at the Colombo Malay Cricket Club, Sri Lanka.

Metropolitan Colombo has the largest population of Malays in the country: one-third of the total population of Malays call it home. The majority of them are located in the epicentre of the city in Slave Island, also known as Kompannaveediya or Kartel. The rest are dispersed across Colombo and its suburbs. Slave Island, which is also home to the Sri Lanka Malay Association (SLMA) and the Colombo Malay Cricket Club, forms a hub of sorts for the community in the city as well as Malays in Sri Lanka as a whole.

The presence of close-knit Malay communities is a primary reason for the preservation of Malay culture and heritage in Sri Lanka. The concentration of Malays in Slave Island was a key reason for the founding of the Sri Lanka Malay Association in 1922, which has made substantial efforts over the years to revive and maintain Malay culture, and educate youth on Malay heritage and history. 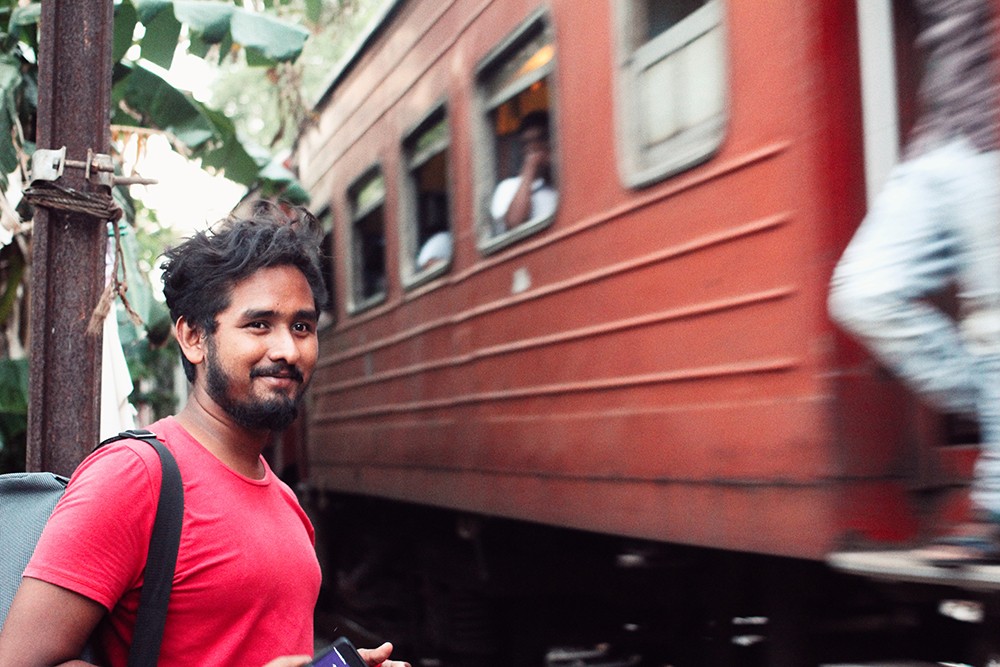 Firi Rahman, a local artist who through his work talks about the unique identity, history and culture of Slave Island, is a part of a new generation at the forefront of transforming the identity of the area in a way that can allow it to survive and even thrive in post-war Colombo.

The Malay language spoken by Sri Lankan Malays, a creole made up of Malay, Sinhala and Tamil, is largely spoken only among Malays – between family, neighbours and friends.  Most Malays are fluent in either Sinhala or Tamil, the two main languages of Sri Lanka, which are used in daily life. With the dispersion of close communities for socioeconomic reasons as well as government-driven gentrification projects as in the case of Colombo today, the language comes under threat, as it is needed less and less for daily use.

Sri Lankan Malays are almost entirely Muslim by faith. However, they maintain a distinct culture and adhere to practices that set them apart from the majority of Sri Lanka’s Muslims. These customs still survive, largely by dint of close-knit communities in Colombo, as well as along certain areas of the south coast, which between them can draw on sufficient group feeling for a sense of identity to be kept alive. Nevertheless, some aspects of Malay culture, such as traditional dancing and singing, have come under attack from more puritan strains of Islam, which have become popular among Sri Lankan Muslims since the 1980s. 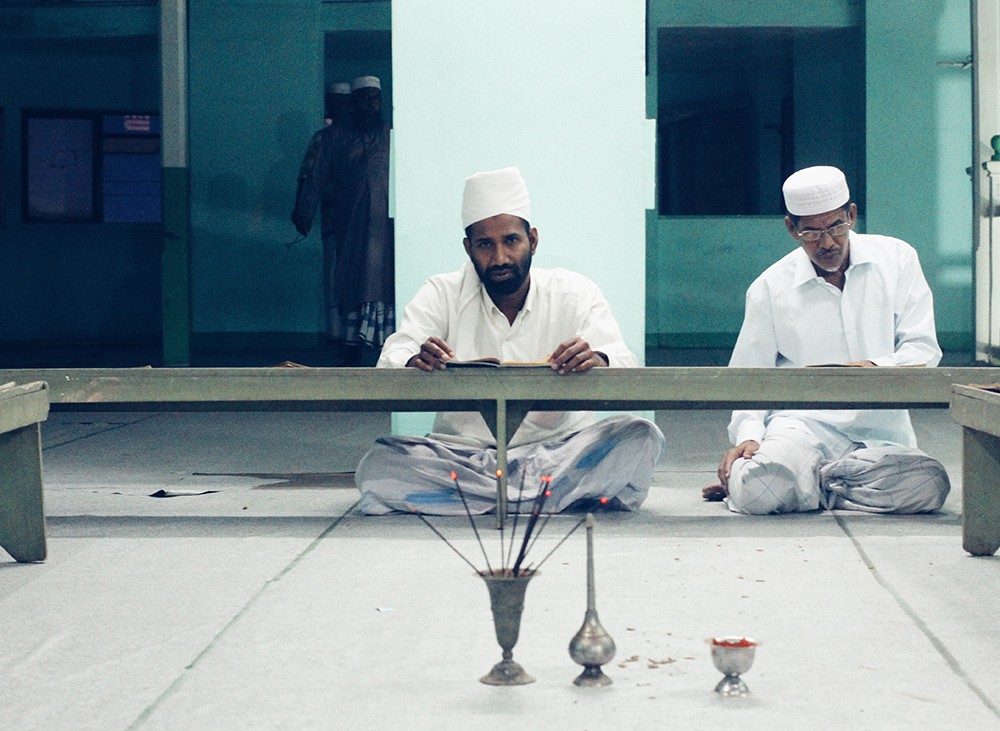 A dedicated few keep regular vigil at the Java Lane mosque, praying for the eventual return of the Malay community that brings it alive.

In post-war Sri Lanka, the communities of Slave Island, a multicultural area that has played a particularly important role for the country’s Malays, suddenly saw their home threatened. The end of the civil war in Sri Lanka drew the attention of investors and developers to what was now prime commercial land in the centre of Colombo. People in some of Slave Island’s largest neighbourhoods, such as Mews Street, Station Passage and Java Lane, were evicted through a mixture of threats and coercion by the militarized Urban Development Authority. Many are yet to be provided with alternative housing and are currently living in rented accommodation, scattered throughout Colombo and even distant suburbs.

Tata, the Indian conglomerate which has taken over the land occupied by Java Lane, has promised the construction of apartments for all those who have been forced to leave, but constant delays have now pushed the promised delivery date to the end of 2018. Similar concerns plague the former residents of Station Passage, who have been waiting nearly four years for Imperial Builders, a Pakistani firm, to build the promised apartments. The company initially promised to complete them in 18 months. Both companies are focused on creating luxury developments for high-income clients. While they have also promised housing for the former residents of the land they now occupy, if Colombo’s recent experience with alternative housing for evictees is anything to go by, the housing provided to the now scattered residents of Slave Island will be less than adequate. The delay in construction has itself contributed to additional trauma and stress for people now without permanent homes to live in – trauma and stress they are unlikely to be compensated for.

Maintaining connections with the past

The sudden and violent dispersion of these settlements has cut off families and life-long friends from each other, already causing irreparable damage to culture and community. While some have managed to find places to stay in areas neighbouring Slave Island, others have been forced to move far away. Many residents still hold out hopes of returning to their original neighbourhood. In Java Lane, the Malay Military Mosque, or the Rupee Fund Mosque (thus named because the soldiers who contributed to it are said to have donated a single rupee each to its construction), is the only building that still stands. The structure, founded in 1864, is an historic monument and thus was preserved. The community clings to it as a powerful symbol of their eventual return, and a group of regulars frequent it every day for prayers and rituals, making sure to keep it alive. 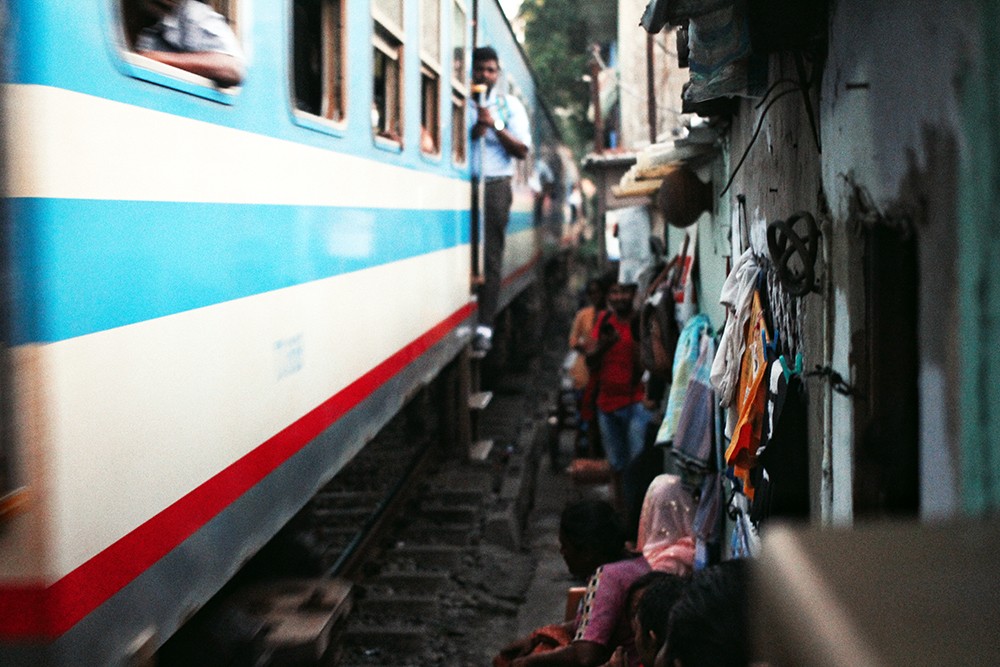 A small Malay community with no permanent housing lives by the railtracks, drawn by the proximity of Slave Island. They are joined by recent evictees from Java Lane and other areas awaiting homes.

The rest of Slave Island, which in total consists of roughly 160 acres, still stands. And the Malay community still has spaces to thrive. The Malay Cricket Club, founded by Malay troops in the Rifle Regiment in 1827, is one of the oldest and most illustrious in the country. Java Lane Soccer Club, an inspiration for many of the football-crazed youngsters in the area, plays in the top tier football league of Sri Lanka. The famous local billiards club, the Cue Café, boasts a history that counts among its patrons some of Sri Lanka’s finest players, including the world champion of 1973, M.J.M. Lafir. 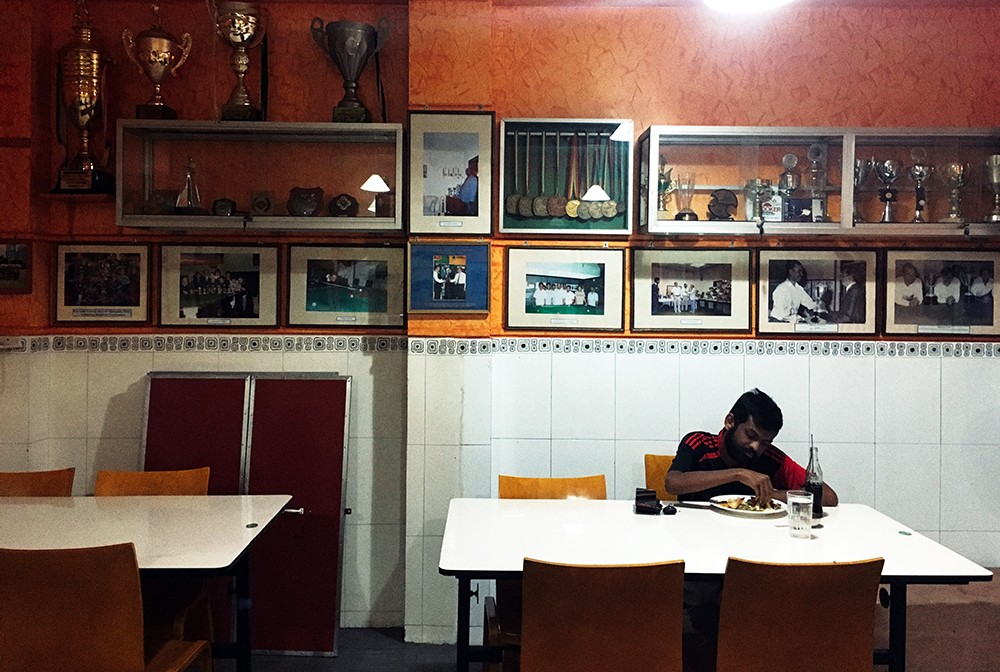 Assorted trophies and memorabilia from Java Lane and other areas left at the Cue Café, Slave Island, for safekeeping.

In the evenings the irresistible smell of street food permeates the air. Arguably, it is only in Slave Island that you can still find authentic Sri Lankan Malay specialities such as pittu and babath, pasthol and oxtail soup. In recent years, Slave Island has also sprouted a local arts scene and has played host to two of Sri Lanka’s most prestigious international art festivals in the post-war era. 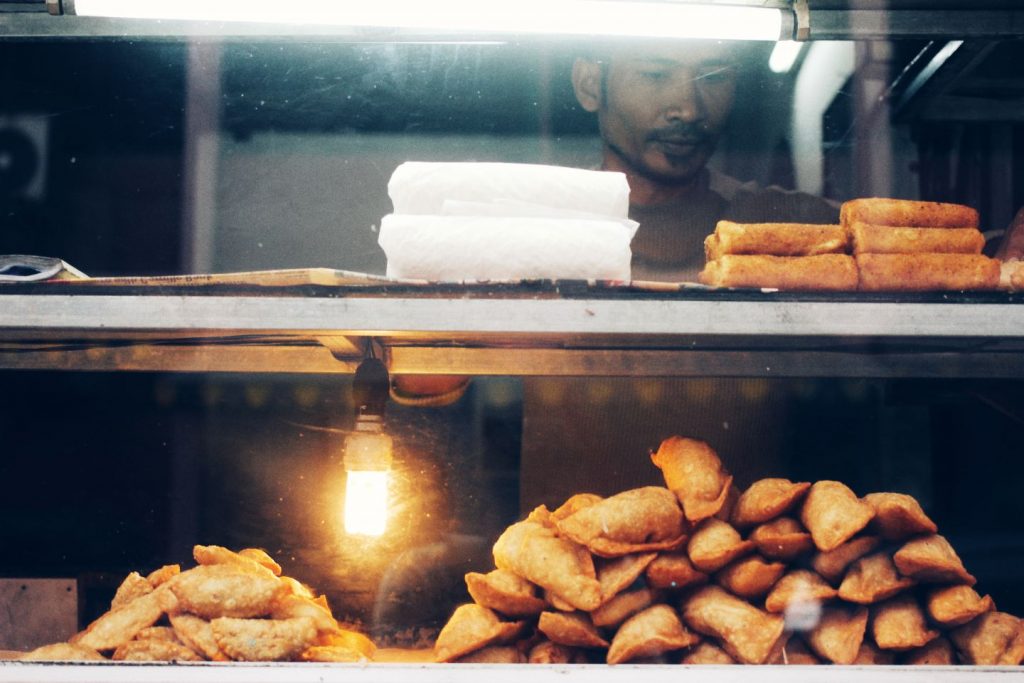 Azar Sappydeen carries on with his parents’ highly successful food business. He still serves pasthol, babath and other Malay delicacies that brought fame to his family.

Colombo’s agenda for gentrification, though temporarily slowed due to the recent change in government, is still alive and is likely to bring more destruction to communities across Colombo. In January 2018, residents of Vauxhall Street, an area just East of Slave Island, were evicted to make way for decorative parkland due to be built around the Beira Lake. The remaining residents of Slave Island live with a continued element of uncertainty. There is a lack of clarity as to what the government’s plans are with the land that their homes are sitting on, and they live in constant fear of receiving an eviction notice.

Header photo: A small Malay community with no permanent housing lives by the rail tracks, drawn by the proximity of Slave Island, Sri Lanka.

India: Living on the fringes of Delhi – the Ghiyaras of Rangpuri and their continued exclusion

Thailand: As violence in the south continues, emigration from the region increases