Bulgaria: The Roma community that got trapped in a coal pit

Bulgaria’s Roma population, one of the largest per capita in Europe, is among the country’s most marginalized communities and Roma frequently experience unemployment, social exclusion and economic exploitation. Bulgaria also has one of the highest levels of air pollution, with elevated levels of fine particulate matter from burning coal and waste – a practice on which much of its electricity industry depends.

In 2017, Bulgaria became the first European country to lose a case in the European Court of Justice for its particularly poor air quality, and pollution continues to take a heavy toll on human health and the environment.

These two issues converge in the Bulgarian town of Pernik. Pernik is a town in western Bulgaria with a population of about 80,000 people, located 40 kilometres from the capital city of So a. According to official data, the Roma population in Pernik is around 3,500 people, but even the municipality of Pernik contests this figure: in reality, though the exact number is unknown, the community is much larger.

At the beginning of the last century, following the discovery of large deposits of brown coal in the area, the town became an industrial hub. Monumental slogans like ‘Glory to the Labour of the Pitman’ can be seen everywhere in town, and many in Pernik still proudly argue that So a was chosen as the capital city only because of its relative proximity to the natural riches of the ‘Black Gold Town’. Today, though, the splendour of this jewel of Bulgaria’s mining industry shines no more. The tens of kilometres of tunnels, which cover roughly two-thirds of the area of the town, are all closed, and only one open-pit mine is still in operation.

Unofficially, though, the mining goes on. In the last decade, there have been regular reports of illegal coal mining – and those typically suspected and frequently referred to in local media as ‘moles’ are Roma. What is usually left out of this analysis, however, is the poverty and exploitation that has driven a small number of community members to engage in this dangerous practice, and the fact that those worst affected are overwhelmingly Roma.

‘Illegal coal mining leads to a landslide in Rudnichar in Pernik’

This is how the media reports on the increasing prevalence of illegal coal mining in old and abandoned mines near Pernik. Those arrested are usually Roma or sometimes former coal miners looking for some additional income.

‘Near Ursata natural park is located the now closed mine owned by the Bulgarian–Belgian company Recoal, which is still operating, but illegally. The local institutions were turning a blind eye, so that there would be some livelihood for the minorities’, says Genadi Kondarev, coordinator for Social Funding for Sustainable Development with the non-governmental organization (NGO) For the Earth. He has been fighting against climate change and illegal coal mining for years.

Ursata natural park is a forest that was supposed to separate Pernik from the open-pit mine just outside the town. In 2005, however, Recoal won a concession and started mining right in the centre of the forest. In 2015, when the contract ended, Recoal failed to fulfil its obligation to re-forest what it had destroyed. The inhabitants of the mostly Roma settlement nearby, known as Rudnichar, are still feeling the after-effects of this.

‘There are 300 unsecured shafts, horizontal galleries and excavations deeper than 20 metres,’ says Kondarev. ‘They are being used even today by people, including young children, to mine coal.’ At rst the mining was for personal use only, but over time it became more organized and the coal is now being sold on the black market for as little as a tenth of its market value. And on the mining went, until eventually three houses in the settlement collapsed.

And though the ‘moles’ themselves live in Rudnichar, Kondarev reports that ‘it is hard to talk with them’ as many now fear losing their income and prosecution for their activities.

A community sickened by mining

The Roma community in Rudnichar prefers not to talk about the illegal mining, but a short walk through the unpaved streets of the neighbourhood shows that almost every house has some coal near the front door and there are lots of small warehouses. Nobody hides the issues created by the now closed mine of Recoal.

The walls of Maria’s house (the names of all Roma community members have been changed) are cracked because of the landslides, but she has not left it. ‘Everyone does what they can in order to get some food on the table here. Sixty years I’ve lived here, practically since I was born. It was really nice here. Now it’s decaying. They cut down the forest. Dug, dug, the rich people, got the coal, took the money, and left. It’s scary when you think about it.’ She used to let her children play in the forest, but now doesn’t allow her grandchildren even close to it. ‘How can I let them go there? It’s a swamp, a hole, a wasteland!’

‘The Belgian guy was a troublemaker!’ adds her neighbour, Alexander. ‘His baggers dug here, then left it in ruins. I let the children play only in front of the door, you can’t let them go farther!’ But when asked about the local ‘moles’, he says that he does not know any and walks on.

Another resident talks more openly. ‘In the night, they use lights to dig. The police tried really hard to stop this, but failed. It’s not a joke at all – 13 people got buried in the ground. They mine to sell, not for personal use. This is fast money, but who knows – one night you go back home, but the next you might be left underground.’

Kondarev has been reporting on the issue for years. The diggers don’t understand how they influence their own communities, but he thinks that the Roma people are being exploited. So far, unofficial estimates suggest that there may have been more than a dozen deaths as a result of accidents from illegal mining, but ‘there is not even any official data on that’. Recoal’s failure to re-forest the area has enabled continued mining and other illegal activities, such as logging, that in turn have resulted in landslides, flooding and adverse effects on the health of the inhabitants themselves. ‘The big money players use the people. For them, the people, they don’t mean anything, their life is worthless. They just send them, give them a few dimes for every sack of coal, and whoever goes out of the ground is out. Whoever doesn’t – doesn’t.’

The illegal coal mining near Pernik turns out to be part of a bigger problem – one that, while attracting criticism from a variety of health and environmental organizations, appears largely to be accepted by Bulgaria’s government and industry. Coal fuels an industry that has been widely accepted as harmful to the environment and a major contributor not only to air pollution, but also to climate change. In Bulgaria there are eight coal-fuelled power plants currently in operation, including the Republika power plant in Pernik, and coal burning – responsible for a third of the country’s CO2 emissions – generates more than 40 per cent of the nation’s electricity.

Coal is largely responsible for the extraordinarily high levels of fine particulate matter in Bulgaria, a major cause of respiratory diseases with deadly implications. The World Health Organization (WHO) has cautioned that the country has the third highest mortality caused by air pollution in the world, after only North Korea and Bosnia and Herzegovina, and has called for immediate measures from the Bulgarian government.

In addition, the European Environment Agency reported in 2013 that four of the five most air-polluted European cities were located in Bulgaria, with Pernik topping the list – a situation reflected in research by advocacy groups such as the ‘Pernik Breathes’ Association. ‘We have mobile measuring stations which we have placed in our homes to examine the air quality before we open the windows,’ says Ivaylo Velinov, a member of the association. ‘With the start of the winter the air gets unbreathable.’

Although Bulgaria is one of the many countries that adopted the Paris Agreement, business continues as usual in the municipality of Pernik. Climate change activists warn that the municipality has received four investment proposals to support the burning of more than a hundred different types of waste to generate electricity. If implemented, this would likely worsen the air significantly. And, at a broader level, while a growing number of countries proudly declare their deadlines for the cessation of coal mining and its use for energy production, Bulgaria has demonstrated no intention of shifting to a cleaner energy source. This is reflected in the statement of the President of Bulgaria, Rumen Radev, at the UN Climate Change Conference in Katowice, Poland in December 2018. ‘We strongly disagree with the unnecessarily high requirements for the reduction of greenhouse gas emissions,’ he said then. ‘We must keep coal mines in Bulgaria because this means keeping jobs and guaranteeing security.’ 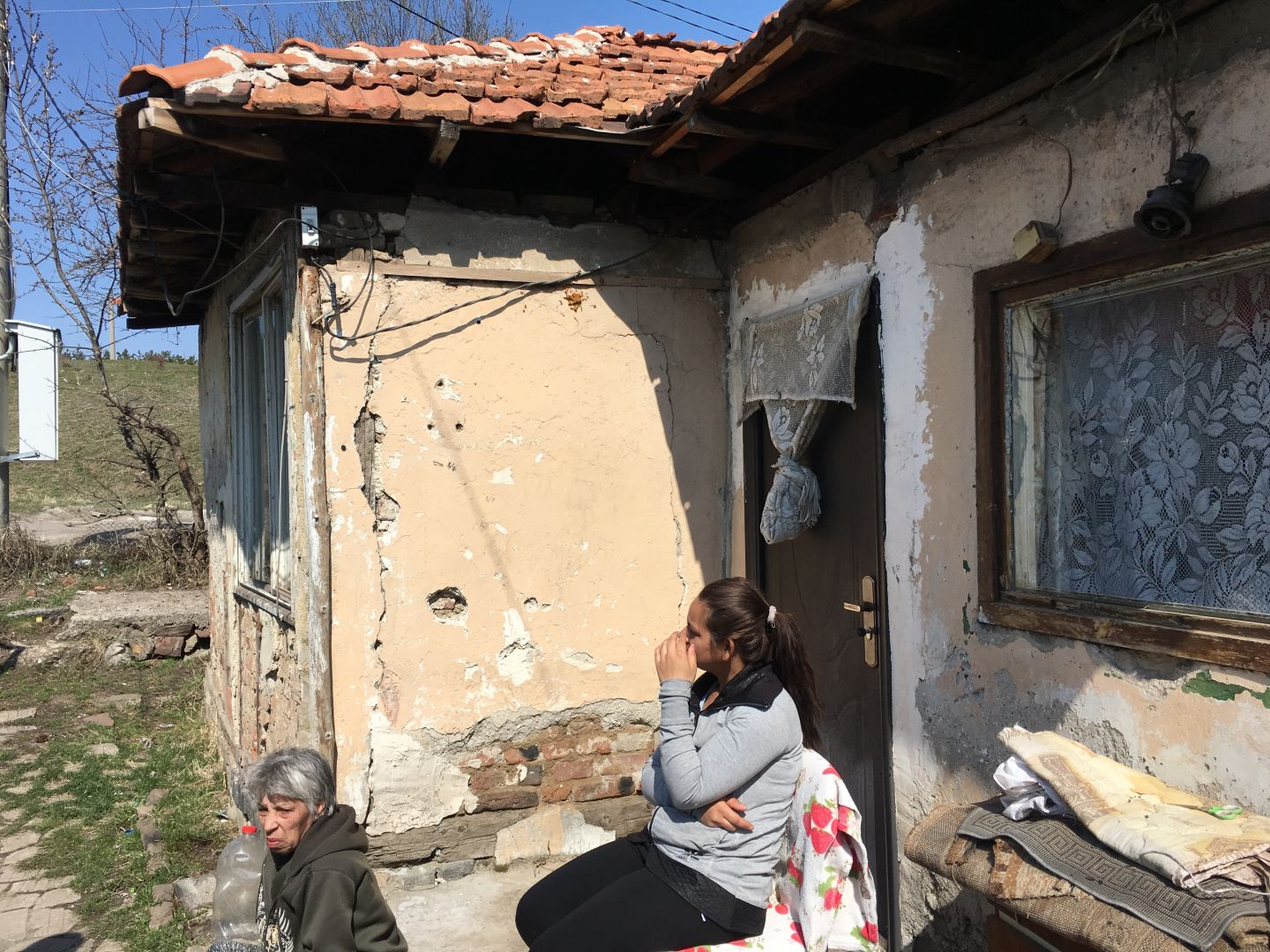 Ignoring the consequences of climate change by focusing on the economic security of the community – despite the fact that the WHO estimates the cost of air pollution to Bulgaria from premature deaths at 29.5 per cent of its national GDP – is a well-proven tool for shifting the topic, skilfully used by the local authorities as well. They tolerate the thriving black market for coal by imposing only nominal control over the restoration of the many abandoned mines. In addition, those residents involved in illegal mining are rarely sanctioned effectively for their actions, or offered the opportunity to engage in alternative livelihoods. Instead, the illegally mined coal is left to infiltrate seamlessly into the local economy. What is needed instead is a transformative strategy, founded on climate justice, to navigate the country towards a greener and more equitable future. This would bring significant benefits to all Bulgarians and prevent many of the more than 15,000 premature deaths that currently occur in the country every year as a result of air pollution. Beyond that, however, there needs to be greater recognition of the poverty and discrimination that has locked marginalized communities such as Rudnichar’s Roma in a vicious cycle of contamination, exploitation and ill health. While stronger regulations would go a long way to protecting them from the worst effects of the illegal mining, authorities also need to invest in providing residents with better opportunities elsewhere. Until the underlying barriers separating Roma communities from other Bulgarians are addressed, it is likely they will continue to find themselves on the frontline of the country’s ongoing environmental crisis.

All names of members of the Roma community have been changed at their request. Contacts with the local Roma community were established with the kind support of the ‘PULSE’ Foundation.