Kenya: ‘There has been no life for us since we were moved out of the forest’

The indigenous Sengwer people, like other hunter-gatherer populations in Kenya, are living in constant threat of eviction from their ancestral lands in Embobut Forest. Classi ed as protected public forest by the colonial government in 1954, the community is now regarded by Kenyan authorities as illegal squatters, despite the fact that Sengwer have resided there for centuries and continue to depend on its resources for its food, livelihoods and cultural traditions.

In 2017, the African Court on Human and Peoples’ Rights ruled in favour of the Ogiek indigenous people, against the government of Kenya in a land eviction dispute similar to that of the Sengwer population. The Court determined that in evicting the Ogiek community from the Mau Forest, the Kenyan government had violated the rights of the Ogiek to their ancestral lands. Much as this ruling should have set a precedent for other conservation projects, the Kenya Forest Service (KFS) continue to forcibly evict Sengwer inhabitants from the area, often violently, with hundreds of homes burnt to the ground since.

The case of the Sengwer has attracted particular attention for being carried out in the name of conservation – and the complicity of international donors such as the World Bank in these abuses. Although the troubles of the Sengwer people began in the colonial era, when their lands were gazetted as forest reserves, in recent years climate funding has been singled out by the community as a major culprit behind the fresh wave of evictions. 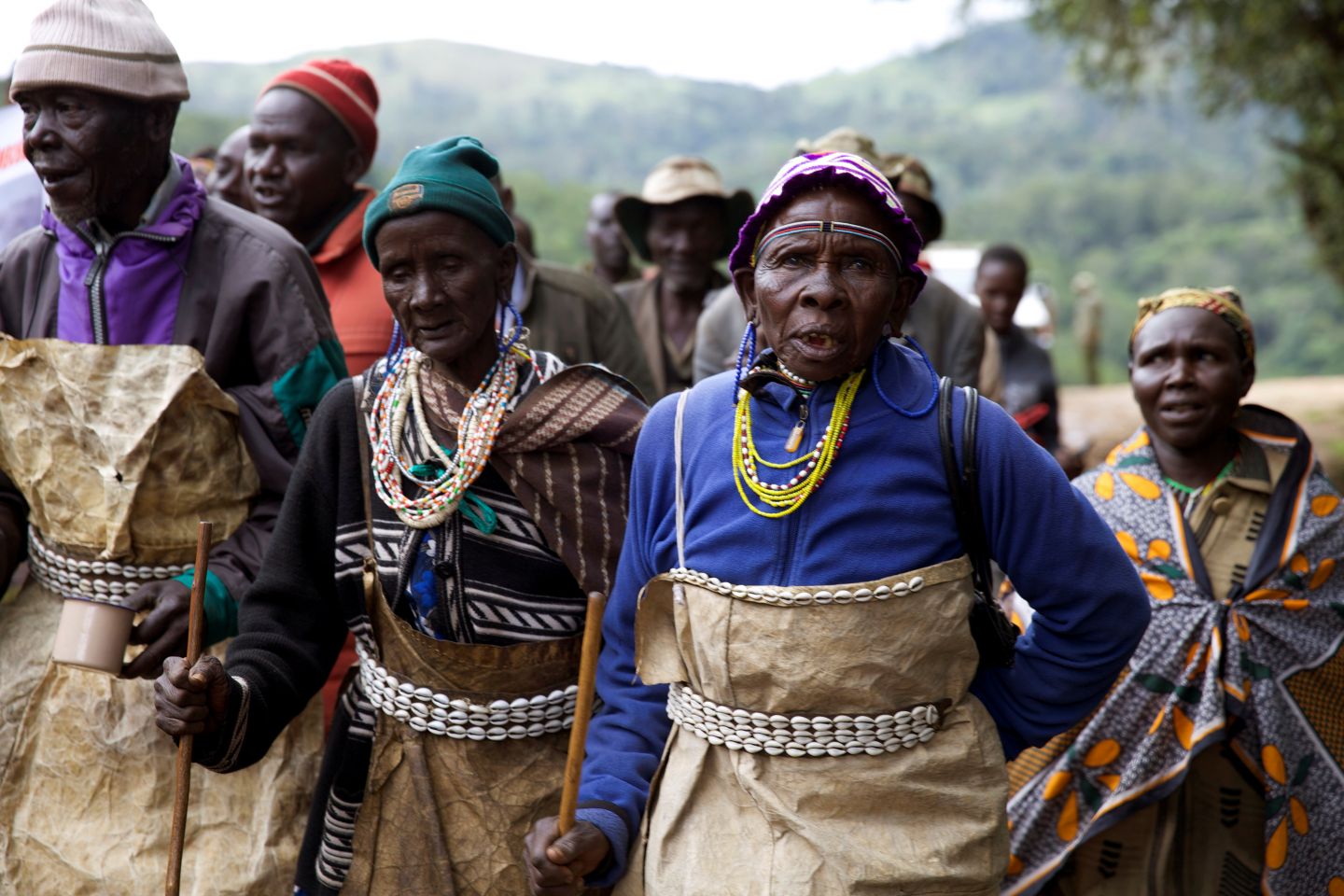 ‘On the surface of it, the KFS guards stand to be blamed but this is only part of the story – there is a whole lot of climate funding that is so blind to human rights safeguards,’ says Milka Chepkorir Kuto, a Sengwer female activist working to protect her community’s land rights. ‘Community complaints and independent expert ndings have clearly shown that the plight of the Sengwer indigenous people is a result of a awed approach to conservation.’

This is underpinned by longstanding accusations that Sengwer are responsible for deforestation in the area – a claim that Chepkorir points out is demonstrably untrue. ‘We have lived many generations in the forest and have protected it,’ she says, adding that deforestation is largely the result of new arrivals in the forest who carry out illegal logging and charcoal burning. ‘The government seems not to see the difference.’

The World Bank’s Inspection Panel, an independent accountability mechanism, was approached by Sengwer community members with complaints about the adverse effects of the World Bank- nanced Natural Resources Management Project (NRMP), which ran from 2007 to 2013 in Mount Elgon, the Cherang’any Hills and other water catchment areas in the country. Reporting in 2014, the Panel criticized the project’s implementation approaches for non-compliance with the WorldBank’s safeguard policies and failure to involve the community in the management of their forest resources, thereby creating conditions that led to evictions.

Another project, the EU-funded Water Towers Protection and Climate Change Mitigation and Adaptation project, has also attracted signi cant criticism for its contribution to the human rights violations against the community. In January 2018,

following a spate of attacks by armed KFS guards on Sengwer activists, homes and livestock, three UN Special Rapporteurs issued a joint statement expressing their concerns about the plight of the Sengwer people as a result of project. Besides calling on the Kenyan government to immediately halt the evictions and conduct investigations into these abuses, it also called on the EU to suspend funding until steps had been taken to ensure indigenous rights were respected. Directly after their statement, a raid by the KFS left a Sengwer man dead and another injured, an action that prompted the EU to immediately suspend funding.

Living with eviction – the impact of resettlement on Sengwer residents

‘Evictions have been affecting children from an early age, making it harder for girls to acquire the education that would help them recognize their legal rights, and develop alternative economic ways to provide for their families. Evictions not only affect Sengwer women, but also affect Sengwer girls, making them susceptible to harsh experiences and exposing them to situations where they are more vulnerable like getting into unions at an early marriage and most often with older men, thereby compromising their childhoods, and rights like education, play, reproductive health.’ – Milka Chepkorir Kuto

The brutal process of the KFS’s forced evictions have been well documented, with thousands of Sengwer homes burnt to the ground, but these actions have also had a more intangible, longer lasting impact on their cultural and spiritual traditions. Milka has documented testimonies from a variety of affected community members in Embobut, Kapyego and Yatoi in Western Kenya that illustrate the wide ranging effects of evictions. From lack of access to medicinal herbs to early marriage, these are undermining the social fabric of the community and posing particular challenges for Sengwer women and girls. ‘Evictions are disrupting the family as a social institution – men are deserting their families,’ she explains. ‘The clans and kinship system is being affected by distance, making it hard for people to adhere to the traditional norms that guide marriages and other traditional practices among the Sengwer community.’

The interviews she has gathered from fellow Sengwer testify to the heavy burden – social, economic, psychological – that displacement has exacted on communities. The loss of livelihood that many face after losing access to the forest forces community members to engage in poorly paid, insecure employment:

‘Many live on other people’s lands and work as a labourer to sustain their families. Life has become dif cult for Sengwer women and their families. Previously, they used to have enough milk from their livestock to sell and consume, but now most children do not drink milk even weekly since their mothers are not settled and are unable to provide as much for them.’ – Community member

The ever present possibility of eviction also creates greater uncertainty for community members in the forest, as well as the threat of intimidation and physical assault during the evictions. ‘During evictions, verbal abuse and physical violence, including sexual violence, take place,’ says Chepkorir. ‘The women who experience these violations are not aware of the legal rights or mechanisms they could take in response to the violence.’

Custodians of the forest

A sad irony of the treatment of Sengwer as a threat to nature is that, in reality,

the exact opposite is true – given their dependence on the continued health of the local ecosystem and its resources, the community have a particular interest in maintaining the forest and have stewarded it sustainably for many generations. This is reinforced by their deep spiritual connection to the land. ‘Sengwer women, just like every member of the community, cherish their culture,’ says Milka. ‘The community has sacred places in the forest where they perform their cultural rites and rituals.’ This reinforces the pain of community members who have suffered displacement as many of these vital sites are now off limits.

Unlike, for example, the illegal loggers operating in the area, Sengwer are also careful to exploit natural resources in a sustainable fashion to ensure their continued productivity for many years to come. This is the case with their use
of herbs for traditional medicines, a practice carried out for centuries by Sengwer women with care and respect. ‘Generations have been taking herbs from the forest and glades for good health,’ says one Sengwer woman. ‘Women who go extracting and collecting herbs do not cut down a tree for herbs, but rather extract the speci c part and leave the entire tree to continue growing.’ Without access to these herbs, however, health issues among displaced Sengwer have increased.

‘In our Sengwer culture, when was a woman even allowed to cut down a green tree? Why don’t they just allow women and their children to go back and live in the glades? Our children are suffering from diseases they never suffered from when we lived in the forest; there are a lot of problems and bad health conditions. We would just like to be allowed to access our herbs, good and fresh air and clean water in the forest for our children and grandchildren. A woman is traditionally harmless to the trees. If they [KFS] claim they want to protect the trees, let the government therefore leave women out of evictions.’ – Community member

The heavy human cost of many large, top-down projects such as the donor- funded programmes in Embobut Forest point to the need for a new approach to climate and conservation projects on indigenous lands – one that not only respects, not disregards, the rights of the communities themselves but also engages them as equal partners in these efforts. The Kenyan government and international donors could, by upholding the rights of indigenous populations to their lands, also achieve signi cant environmental bene ts by supporting tried and tested approaches to the management and preservation of natural resources. This would help promote sustainability effectively without sacri cing the needs of marginalized communities in the name of conservation.

‘Do you think we should hope for the return of our ancestral land? Should we just agree with the government that we have left the forest as we negotiate for only grazing permission? Because these evictions and the loss they have caused us are becoming too much. But we still wonder where they want us to go together with our families, leaving our ancestors behind.’ – Community member

Photo: Members of the Sengwer community protest their eviction from their ancestral lands in the Embobut Forest, by the government for forest conservation in western Kenya. Reuters / Katy Migiro