Peru: Hunger and malnutrition among Shawi communities in the Amazon

While Peru has enjoyed a protracted economic boom, the situation for many of its indigenous communities remains challenging. Indeed, in some areas of the Peruvian Amazon, food security and nutrition are more strained than ever as development projects, deforestation and rapid population growth have increased pressure on local resources.

However, these issues have become even more pronounced as the effects of climate change – including rising temperatures, more intense flooding and severe droughts that disrupt the fragile hydrological system – are increasingly being felt.

The Armanayacu watershed is located in the Amazonian region of Loreto, in the north of Peru, and is home to 19 Shawi indigenous communities with a total population of over 1,000 inhabitants. Situated in high jungle, where altitudes range between 120 and 800 metres above sea level, temperatures are high all year round and precipitation is constant, although there is a significant decrease in rainfall between April and October. Despite residing in one of the most biodiverse regions in the world, however, Shawi households have been struggling to maintain an adequate and nutritious diet. Consequently, these communities now find themselves on the frontline of the climate change impacts threatening the Amazon ecosystem.

Shawi community members have themselves highlighted how conditions appear to have become much more variable in their territory, with at least four major incidents of flooding reported by the local disaster risk management authorities between 2015 and 2018. The impact of these events has been considerable. For instance, during one serious flood that took place in November 2017 the water rose half a metre and remained at that level for around five hours. While there were no casualties, the secondary school was severely affected, with the library, furniture and educational material largely destroyed. Major flooding events have often forced the school to remain closed for prolonged periods until it is safe again for the students to return.

In particular, climate change is undermining access to local food resources, with serious implications for Shawi community members. Some report having to skip meals and even not eat for a whole day because they are not able to find enough game or sh to meet their needs. This sort of scarcity was far less common in the past. In one of the most distant communities, one older Shawi remembers when his father arrived for the very first time at the Armanayacu River, at the beginning of the twentieth century, when animals were abundant in the forest. According to an older Shawi woman, ‘In the past, you used to feel hunger only when you were not able to go to the forest. Women could hunt sh easily in the river – these days I do not know what my grandchildren are going to eat.’

Shawi report that around 30 years ago, they used to spend a couple of hours at most hunting deer, huangana and sajino (two varieties of peccary) and majás (a paca or large rodent). ‘These days,’ says one community member, ‘we go to the forest with hunger, and return bringing more hunger.’ Climate change also represents a challenge to Shawi agriculture, since many households have turned from hunting and gathering food from the forest to rely more on working the land and growing crops to eat or sell. The market for these goods, however, is limited by the low price assigned to many Shawi crops, such as corn and plantain, in Yurimaguas city. Higher temperatures and a less predictable rainy season could further impair these activities and undermine crop production.

However, the community has developed some effective coping strategies that may provide a measure of resilience to the challenges of climate change. For example, groups of Shawi males will together go into the forest and spend several nights there before returning with whatever they are able to catch – often just one small monkey – to share among their relatives. It is a common practice among Shawi to share food, especially when hunted or gathered from the forest, and this is one of the main strategies developed by Shawi to overcome food insecurity and meet the food needs of those community members, such as older persons, single women and couples that have recently had a child, potentially at risk.

There are also new challenges, beyond climate change. While the region has now become more accessible, with the construction of a new road that has facilitated the arrival of outsiders to the area and an accompanying sharp rise in levels of deforestation, the implications for indigenous communities and their food security remain uncertain. In recent years, the increasing presence of many non-Shawi people as owners of new grocery stores has resulted in processed food, such as soft drinks and alcoholic beverages, becoming much more widely available, with greater chances of developing other forms of malnutrition such as obesity and chronic health conditions. In addition, the road is used by large trucks to transport wood throughout the year, while in the past wood was only transported by river and mainly during the wet season. Far from improving access to nutritious food supplies, the road could – by accelerating population growth, fragmenting the forest with construction and scaring away animals from the area with the noise – further diminish the chances of finding meat and fish in the region. In addition, the high level of food insecurity forces some Shawi to engage in activities that put at risk the survival of the fragile ecosystem. For example, some households have had to sell wood to illegal loggers in order to access cash to buy supplies for their children’s education.

In this context, education is one potential pathway to improve food security in the future. Given their strong social cohesion, Shawi believe the benefits of education would extend beyond individual students to the entire community. ‘With high education levels,’ says one resident, ‘we know he or she will share. When the youth have an income they will share with their family – Shawi are like this. The future is education: an NGO [non-governmental organization] or the government must support knowledge for agriculture production, then each family will have their incomes and be ne.’ Shawi are therefore keen to see improved educational access alongside the preservation of indigenous knowledge and adaptive strategies. This means that authorities need to respect the local vision of economic development and build on existing indigenous social institutions, such as the traditional customs surrounding the sharing of food and income, to strengthen household food security. 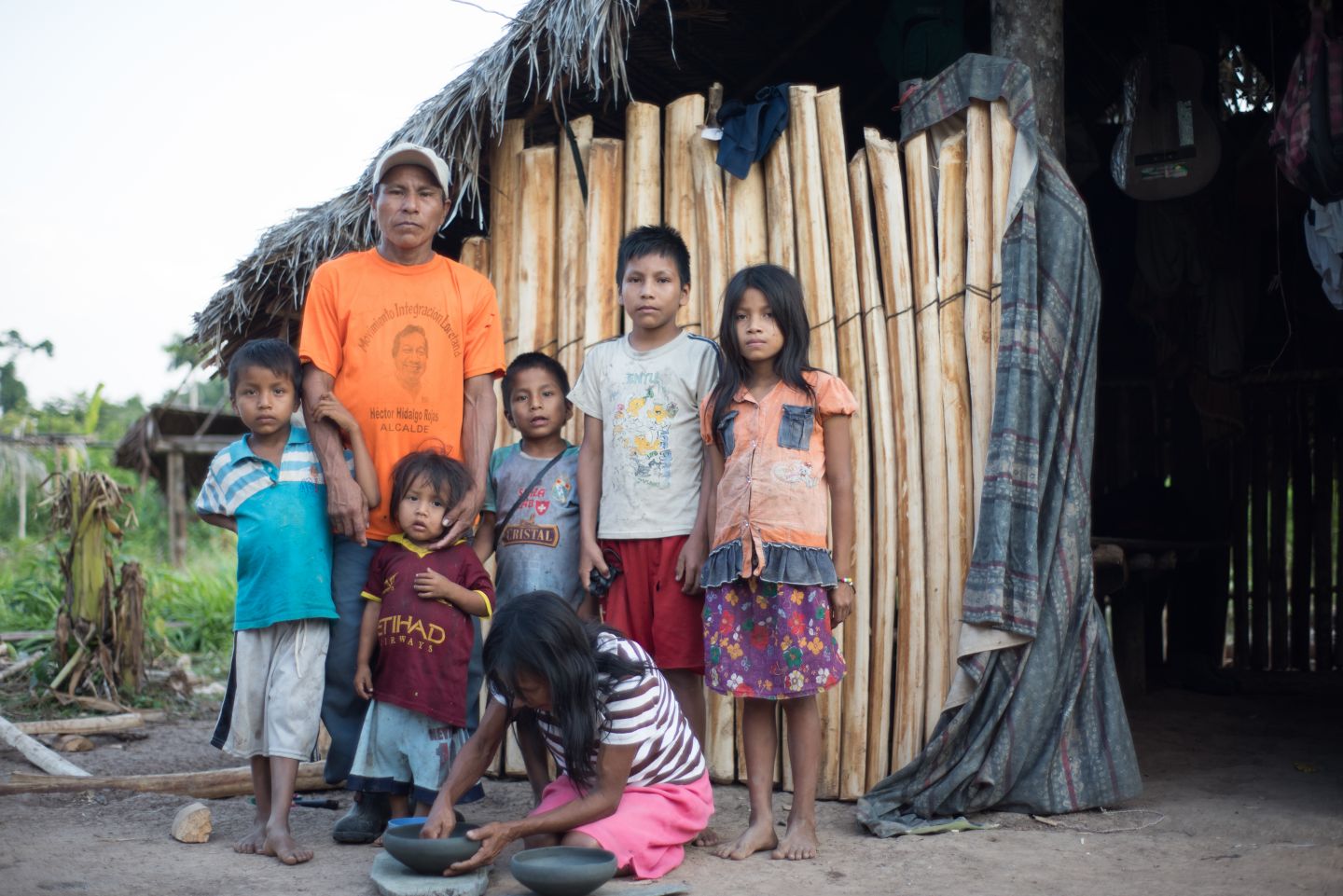 The impact of climate change on Shawi communities needs to be understood in a broader context of discrimination and exclusion. Peru’s indigenous communities have long struggled with poor food and nutritional access, and their dependence on local ora and fauna for their survival makes them especially vulnerable to environmental pressures. While longitudinal data for Shawi communities is not yet available, food security among indigenous people in the Peruvian Amazon appears to be getting worse, despite the country’s rapid economic growth: one study, published in 2015, found that levels of chronic malnutrition among indigenous children were as high as 56 per cent compared to 22 per cent among non-indigenous children.

Despite the reliance of Shawi and other Amazonian indigenous communities on locally farmed and forest food sources, the response of the Peruvian government has typically been oriented towards the delivery of non-indigenous and processed food products through school or municipal programmes, with limited attention being paid to the voices of Shawi themselves. While Peru published its Framework Law no. 30754 on Climate Change in 2018, representative bodies such as AIDESEP (the Interethnic Association for the Development of the Peruvian Rainforest) are calling for indigenous perspectives on food security and diet to be incorporated into the new law. Measures such as these, reflecting indigenous food preferences and livelihood needs, could help generate a more equitable form of development that includes indigenous peoples in the Peruvian Amazon.

This case study draws on research conducted as part of the Indigenous Health and Adaptation to Climate Change Research Program (IHACC), a multi-year project in the Peruvian Amazon, Canadian Arctic and Uganda examining the health impacts of climate change on indigenous communities.