Tuvalu: ‘We have a right to stay in our God-given Islands.’

Soseala Tinilau, besides serving as the Director of Environment in Tuvalu’s Ministry of Foreign Affairs, Trade, Tourism, Environment and Labour, is also President of the Tuvalu Islands Football Association (TIFA). In 2018, as he explains to MRG, the Tuvalu team performed in the Confederation of Independent Football Associations (CONIFA)’s World Cup – an opportunity that was used not only to showcase the country’s football skills but also the challenges posed by climate change.

Climate change has impacted on Tuvalu and its inhabitants due to its resource-poor, low-lying, fragile and remote physical nature. These are some of the environmental effects I have noticed:

My motivation for drawing attention to climate change during our participation in the 2018 CONIFA World Cup is due to the fact that we were representing Tuvalu and because of the issues we faced back home. Even with these uncertainties, we can become resilient if we work together to adapt to the adverse impacts of climate change, and we can use football as a tool for advocacy. As you know, football is the beautiful game, and more people can relate themselves to this.

I made appointments especially with sportswriters and television stations to be interviewed during the games, and that’s where I mentioned the plight of our country due to the adverse impacts of climate change and asked the audience to help reduce their emissions, because a small act goes a long way. We have a right to stay in our God-given islands.

I wish to see countries, especially those who are parties to the Paris Agreement, do their fair share and expedite the implementation of the Paris Agreement, increase their National Determined Contributions to reduce emissions and to make the transition to renewable energy. 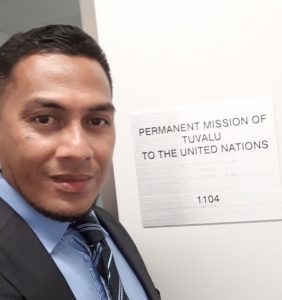