United States: Hurricane Katrina hit minorities in New Orleans hardest – and without effective intervention the next disaster will do so again

Almost 14 years on, New Orleans is still recovering from the devastation wrought by Hurricane Katrina in August 2005. Causing unprecedented economic damage and bringing an entire city to a standstill, without access to infrastructure or basic services, Katrina represented one of the worst natural disasters in the history of the United States (US).

However, it did not happen in a vacuum. As well as revealing stark inequalities, particularly across race and class, Katrina was the catalyst in a multiple- and prolonged-impact event that included a number of storm surges and multiple levee breaches from the two rivers that engulfed New Orleans as well as a chemical explosion and massive oil spill, ending with another hurricane, Hurricane Rita.

As such, it illustrates the complex intersection of climate change with wider institutional failure and discrimination. Its unequal impacts and fraught aftermath demonstrate the need for an intersectional approach to disaster prevention and response that recognizes and addresses inequalities, particularly those experienced by minority populations.

Katrina occurred at a time where there was a lot of debate about climate change, and for many observers it appeared to con rm the worst. Nevertheless, at rst there was little ‘concrete’ data to prove a correlation between the rise in global temperatures and the destructive intensity of Katrina, with only one study emerging a year later that proposed that Katrina’s impact was intensified due to a rise in ocean temperatures. Since then, however, with a growth in specialist technology, there is more evidence to suggest that hurricanes can indeed be worsened by climate change, with a range of research demonstrating that storms such as Katrina are likely to have been exacerbated as a result. 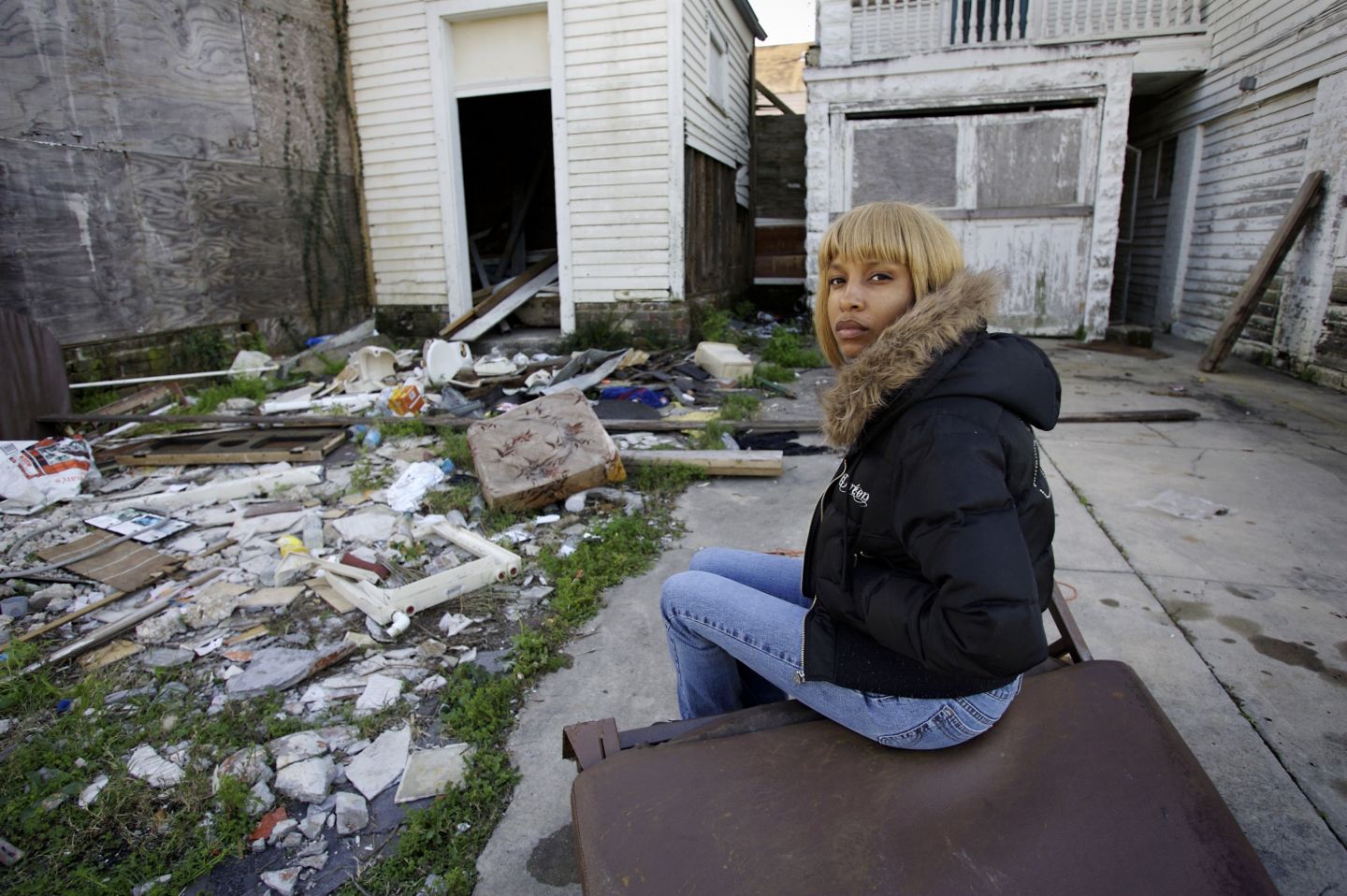 Though the debate is ongoing, it is widely accepted that temperatures had risen at the time and have continued to rise ever since, while hurricanes are intensi ed by warmer sea temperatures. At the same time, the destruction of the mangroves along the Gulf Coast and land subsidence have removed natural protections from storm surges. All this suggests that climate change and environmental pressures are likely to have increased the risk of a natural disaster such as Katrina. However, it is not just climate change that is the issue here, but also the social and economic disparities of New Orleans itself, with its minority populations among those worst affected because many were less likely to have the resources to adapt and more likely to be living in unsafe and more exposed conditions.

In the 1990s, disaster scholars drew attention to the fact that minority populations can be rendered more vulnerable than mainstream populations after a disaster and through this work led disaster research towards greater recognition of the social forces that could turn a natural hazard into a disaster. The catastrophic after-effects of Katrina illustrate this point. While few were untouched by Katrina – from the upper-class neighbourhoods of Uptown, to the artistic, ‘hipster’ areas of MidCity, to the projects of the Ninth Ward – pre-existing power relations around position in society, access to resources and distribution of income mean that some communities were less well placed to recover than others. Disasters can thus be seen as social events that reveal the inequalities, vulnerabilities and coping mechanisms that inform how people negotiate the ‘permanent disaster’ of daily life.

After Katrina hit the city, thousands fled to the Superdrome sports stadium where the authorities were meant to be providing protection, shelter, supplies and care. But they were completely underprepared and supplies, including fresh water, ran out in days. Where minority identities intersected, the impacts of Katrina were especially acute. Among African-American New Orleanians, for example, research showed that working-class identity and gender could exacerbate the impacts, with women at the centre of this intersection disproportionately affected by Katrina. This reality was explained through the fact that African-American women are more highly concentrated than any other demographic in services and sales, with already lower job security and wages than other areas of employment and in industries that were slow to recover post-Katrina. What are also revealed here are the implications of pre-existing inequalities faced by minority populations. To put this into context, around the time of Katrina, only 14 per cent of African- American women in New Orleans aged 25 and over had degrees, compared to 55 per cent among their white and Hispanic counterparts. This is despite the fact that over half the population in New Orleans is African-American.

Furthermore, some members of the Hispanic New Orleanian population faced the additional burden of documentation where their prior status was not legal. This prevented some segments of Latinx New Orleanians from being able to access vital resources and federal support, including access to temporary living space, food stamps and emergency funds. This situation persisted post-Katrina, when it was reported that many reconstruction workers were Latinx but employed on precarious contracts that meant they were not being properly paid and their labour exploited – a situation that was exacerbated when workers did not have of crucial documents to prove their visa status. There were also language barriers for those who were relatively new to the United States, making it difficult to negotiate ‘red tape’ such as complex form-filling.

The worst affected were those who were already vulnerable due to lack of access to resources to evacuate out of state and due to where in the city they lived, with poorer neighbourhoods situated on lower-lying ground, as well as how they were treated by officials in recovery and reconstruction. As indicated above, where minority identities intersected, the impacts of Katrina could be worsened: research has also shown that disabled people, elderly people, particularly women, linguistic minorities such as Cajun and Creole people, as well as indigenous peoples, faced a greater impact as a result of Katrina. For instance, while New Orleans is hailed as the ‘gay capital of the South’ and as such has a higher population of LGBTQ+ people, the state of Louisiana in general is not known for its tolerance to queer sexualities. Research by New Orleanian scholar Charlotte D’Ooge about lesbian women’s experience post-Katrina found that lesbian women struggled to gain access to relief services and found their relationships were not recognized by officials, demonstrating that lesbian identity and relationships placed them in a position of vulnerability and discrimination.

The effects of Katrina were exacerbated by the state’s failure to maintain infrastructure or address pre-existing inequalities. Had the investments been made to improve the levee systems, had a proper evacuation plan been in place, had the mangroves been restored, Katrina would never have happened the way it did. This reveals the complex intersection of climate change with institutional responsibility and, moreover, how inseparable institutional commitment to infrastructure is from climate environments, locally and globally.

Improving security in the context of a changing climate

While research on the connection between the increasing frequency and intensity of hurricanes and climate change is still ongoing, based on the available evidence there is good reason to be concerned about the implications of rising temperatures and other impacts for New Orleans and similarly exposed cities. With research indicating that hurricane intensity is deepening and little evidence that a suitable levee system is now in place, should another hurricane make its way to New Orleans it is very possible that the city will again experience disaster. Though better evacuation procedures are in place, in the event of further destruction it may not be possible for many people to return, and this does not account for those who are still not able to evacuate due to a lack of economic and social resources to do so.

This reflects not only the reality of a changing climate but also the limited commitment of the state to investing in adaptation infrastructure. Katrina occurred during the Bush administration, whose official line was to deny climate change, and as the violence and bloodshed of the Iraq con ict was escalating further. The so-called ‘war on terror’ took precedence over natural disaster public spending, which included the maintenance of infrastructure in a city that was home to a large population of minorities who were disproportionately affected as a result. At the same time, it should be highlighted that these vulnerable populations were and are much more than victims. In many cases, they have existing strategies and coping mechanisms in place that, with proper investment and support, could protect them and their communities from future shocks. The challenge, however, is implementation when access to resources and representation remains so restricted.

More fundamentally, the inequalities that shaped the way the disaster of Katrina unfolded in 2005 remain largely unchanged today, with New Orleans recently ranked as the second most unequal city in the country. These divisions, too, are still evident along ethnic lines, with incomes in 2016 of just US$25,800 among African- American households in New Orleans compared to US$64,400 for white households. Little research exists about further intersections among minority groups such as Creole, Cajun and Latinx peoples or queer communities. This is worrying, given that climate change research suggests that disasters will only intensify in future – and that minorities, as vulnerability scholars have highlighted, will be the worst affected.

Photo: 22-year old Tammy sits on a piece of junk on a derelict street. She was made homeless by Hurricane Katrina which hit New Orleans, Louisiana in August 2005. Panos / Robin Hammond.