From the point of view of human rights and social inclusion, the development of information technologies (IT) in Bulgaria got off to a bad start when, in 1968, the sector was established by the Council of Ministers by means of a secret decree. By the 1980s, when it had expanded into a large industry, it was still playing a covert role in the Cold War competition between the East and the West, including developments in robotics and industrial espionage. By Alexey Pamporov.

From the point of view of human rights and social inclusion, the development of information technologies (IT) in Bulgaria got off to a bad start when, in 1968, the sector was established by the Council of Ministers by means of a secret decree. By the 1980s, when it had expanded into a large industry, it was still playing a covert role in the Cold War competition between the East and the West, including developments in robotics and industrial espionage. By Alexey Pamporov.

Much has changed since then, of course, particularly as technologies have become accessible to the Bulgarian population as a whole. Though Bulgaria has the lowest level of internet access of any country in the European Union (EU) – in 2018, less than three-quarters (72 per cent) of households had internet access – the situation has been improving rapidly, with more and more Bulgarians enjoying internet access every year. Nevertheless, an important factor that the official statistics do not take into consideration is the added barriers that minorities such as Roma face: most of the national analyses focus on regional disparities, and age or lack of skills rather than ethnic inequalities specifically. However, an international survey conducted by the EU’s Fundamental Rights Agency (FRA) in 2016 revealed that over 40 per cent of Roma people in Bulgaria cannot afford a private computer, smartphone or internet access – a startling figure that suggests, even as Bulgaria makes progress, that its Roma population is still being left behind. 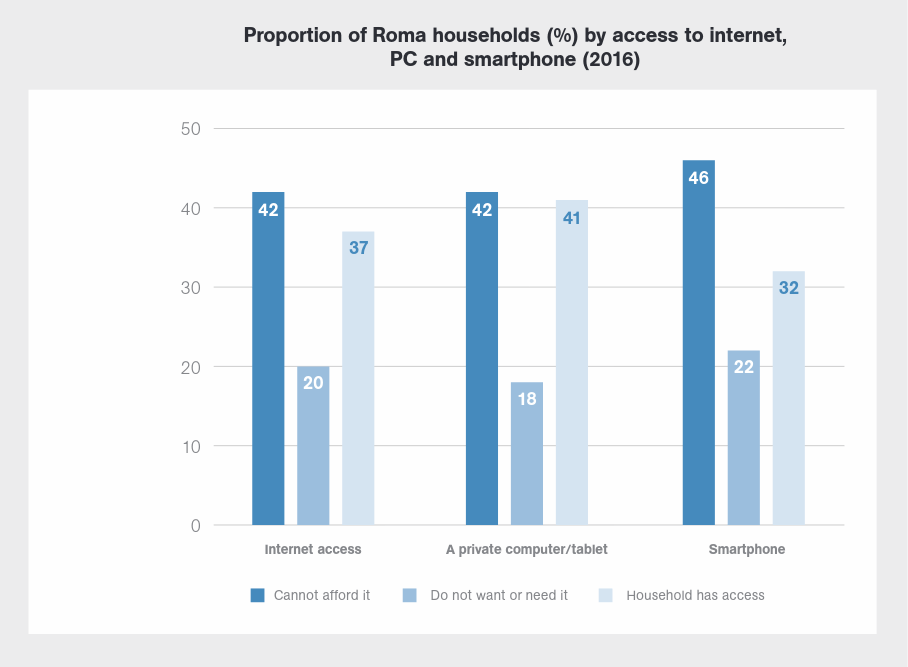 ‘Roma’ is often used within the EU as an umbrella term for diverse groups including Gypsies, Travellers, Manouches, Ashkali, Sinti and Boyash, besides Roma (that is, Romani speakers). As in many other European states, the word Tsiganisignifies this aggregate of ethnicities in Bulgaria – a term that is seen by many community members as pejorative. However, after the ratification of the Framework Programme for Equal Integration of Roma in Bulgarian society in 1999, the term Romareplaced it in all official documents.

There is a common language network of Romani dialects and patois that share a similar grammar and morphology, enabling Roma around the world to communicate with each other about basic things like food and family life. At the same time, the main dialects differ significantly in their phonetics and vocabulary due to the influence of the surrounding populations. Since there is no standardization of the main dialects or of the Romani written system in the country, attempts to establish Romani language teaching as an extracurricular subject in the Bulgarian school system have so far achieved little success. Moreover, a significant proportion of the population defined as Roma speak Bulgarian, Turkish or Romanian as their mother tongue, rather than Romani: many members of these groups do not self-identify as Roma themselves. Based on the language spoken at home, religion and lifestyle, it is in fact possible to distinguish five main Roma groups in Bulgaria and several other subgroups whose self-identification is distinct from Roma.

The picture is complicated further by the absence of reliable data on the Roma population, a legacy of decades of discrimination that has resulted in their true numbers being consistently under-reported. Until recently, the most accurate figures on their size were not from the official censuses, where Roma were routinely under-counted, but in the ‘confidential reports’ drawn up by local police departments based on their surveillance of these communities, where numbers were significantly higher. Nevertheless, uncertainty around these numbers persists to this day: while the 2011 census found that 4.9 per cent of those who provided their ethnicity identified as Roma, alternative estimates suggest that the actual proportion may be as much as 10 per cent, double the official estimate.

When it comes to the situation of the different communities in terms of poverty, basic services and other measures of social exclusion, the limited information available confirms that they are still some of the most marginalized groups in Bulgaria. This is evident across a range of indicators, from teenage childbirth and early school drop-out to unemployment and inadequate housing. Living in segregated areas with limited access to water, sanitation or electricity, the impacts translate into poor health outcomes that are reflected in an estimated life expectancy ten years below that of non-Roma. This exclusion is in large part due to their official invisibility: as many Roma live in informal settlements, it is difficult even to register their permanent addresses as a precondition to obtaining identity documents or a citizen registration number for a newborn child.

A key element in addressing these inequalities is more accessible and inclusive education. Learning outcomes among Roma in Bulgaria are markedly lower than for their non-Roma peers. A recent survey conducted for the Trust for Social Achievement (TSA) reveals some positive trends in this regard: the proportion of people with only primary school or lower educational attainment fell from 15.3 per cent in 2011 to 5.6 per cent in 2019, while at the same time there was an increase in the share of Roma with completed university degrees (from 0.2 per cent to 1.2 per cent). Likewise, educational enrolment in the 7–15 age group rose to 92.8 per cent in 2019 from 82.8 per cent in 2011. Many problems persist, however, including high levels of school drop-out and an increase in school segregation: alarmingly, the share of Roma children enrolled in schools where Roma made up more than half of the student body increased from 31 per cent in 2011 to 47 per cent in 2019.

Code Success: a breakthrough in IT education

Unsurprisingly, given the broader backdrop of discrimination in Bulgaria and the barriers many face to accessing education, Roma are poorly represented in the country’s IT sector. One organization that has sought to challenge the status quo is the Code Success Foundation, with an initiative to actively target and recruit Roma children, who until now have been largely overlooked by the industry. Importantly, the project recognized that many of those it aims to reach are already on the margins of the education system and at risk of dropping out from mainstream schooling.

As a result, it incorporated an extensive preparatory programme that includes preliminary development in ‘soft’ skills like Bulgarian, English and mathematics, as well as psychosocial support to help students navigate personal and family difficulties, before the IT training itself begins. Given that many of those enrolled may have been alienated by their own experiences at school, the teaching methodology combined a range of innovative approaches such as gamification, flipped classrooms and road-mapping. Most importantly, it was committed to the principle of equality and seeks to bring together Roma and non-Roma students from different neighbourhoods. Overall, 32 students were enrolled and 16 children completed the full course, of whom 12 succeeded on the IT fundamentals test at the Software University (a partner on the programme) and three received scholarships to continue with an additional advanced module with C# or Java.

There were two diametrically opposed reactions from Roma communities. Some parents were hesitant and did not allow their children to be enrolled (after a successful initial screening) or made them drop out at a certain point. There was particular resistance towards the participation of Roma girls due to fears of them being subjected to violence or human trafficking. However, those children who were allowed to remain in the programme were positive and engaged, with attendance rates over 70 per cent. One of the children even graduated ‘in secret’ from his parents, since they were against his involvement but he was old enough to consent.

The project had an added value for all enrolled children, regardless of their final assessment within the Code Success Foundation: despite high drop-out rates among their communities, they all graduated and saw their scores in Bulgarian, English and mathematics improve as well. Five are now university students and all the rest have jobs. Nevertheless, the organizers of the programme are themselves acutely aware of the fact that initiatives such as theirs can only go so far. In the words of Vesselin Drobenov, the CEO behind this project, ‘despite all the good news, the technologies are no panacea for education’. Alongside the advantages of the new technologies — increased effectiveness due to quicker access to information, new pedagogical approaches, prompt feedback and skills development relevant to today’s work market — there are some shortcomings too, such as the reduction in face-to-face communication and personal interaction.

Perhaps the greatest challenge, however, is the unequal access to internet and IT technologies that continues to affect Roma in the country. In this context, while small initiatives such as this one can deliver extraordinary results, their impact will remain limited until there is a more fundamental transformation of Bulgarian society to ensure that the Roma population is recognized, respected and included as equal citizens.

‘Old technology for a new beginning’: Meeting the challenge of Covid-19

The outbreak of the Covid-19 pandemic has brought many of these long-standing issues around discrimination, educational exclusion and limited access to new technologies to the fore. When, in March 2020, the Bulgarian government established a national lockdown in response, the entire educational system was forced to transfer all its material online and adapt to distance learning using computers. Concerned about the educational inequalities, the Centre Amalipe, a Bulgarian Romani NGO, ran an express survey of around 200 schools which found that significant percentages of students in schools with a large proportion of vulnerable children lacked the necessary equipment and technical skills to access online education effectively. In response, it launched an appeal, ‘Old technology for a new beginning’, to collect donations of old PCs, laptops and tablets. At the same time, in neighbourhoods where there is no internet access, some educational mediators have delivered printed materials to the homes of affected children.

There is certainly a real danger that, alongside all its direct health risks, Covid-19 could deepen existing inequalities. At the same time, it has made the questions of poverty and lack of access to proper educational services for Roma children more visible than ever. We must hope that, building on the success of activities like the Code Success initiative, the authorities take this opportunity to overcome the long-standing barriers to schooling and technology Roma have faced to deliver equitable and inclusive education for all at this time of crisis.

* The author would like to express his gratitude to TSA for providing access to (at the time of writing) unpublished data. The opinions expressed here do not necessarily express the opinions of TSA and Global Metrix.

Photo: An education mediator and a member from the Roma community in Bulgaria carry computer equipment / Amalipe