Cambodia’s forests are being pillaged to feed demand for luxury lumber in Vietnam and China, decimated for industrial agriculture, such as rubber plantations, and cleared for mining exploration. Deforestation rates in Cambodia are among the highest in the world: Global Forest Watch estimates that from 2001 to 2018, Cambodia lost 2.17 million hectares of tree cover, equivalent to a decrease of 25 per cent. By Nicole Girard.

Cambodia’s forests are being pillaged to feed demand for luxury lumber in Vietnam and China, decimated for industrial agriculture, such as rubber plantations, and cleared for mining exploration. Deforestation rates in Cambodia are among the highest in the world: Global Forest Watch estimates that from 2001 to 2018, Cambodia lost 2.17 million hectares of tree cover, equivalent to a decrease of 25 per cent. By Nicole Girard.

Prey Lang forest is the largest remaining lowland evergreen forest complex in mainland Southeast Asia, comprising 500,000 hectares spanning four provinces in the central plains of Cambodia, home to an astounding array of endangered species and approximately 200,000 indigenous Kuy people. Despite being declared a Wildlife Sanctuary by the Cambodian government in 2016, logging in Prey Lang has continued, with deforestation rates inside protected areas in Cambodia consistently as high as those found outside.

Indigenous Kuy, who rely on these forests for their livelihoods, through collecting resin and other non-timber forest products, as well as their spiritual and cultural identity, have been collectively organizing for protection of the forest. Formed in 2007, the Prey Lang Community Network (PLCN) brought together concerned community members and combined efforts to protect the forest. One of their main activities has been forest patrolling, whereby groups of community volunteers informally track illegal forest activities, alerting authorities, damaging cut timber and confiscating logging equipment.

Their monitoring efforts, while dedicated and driven, depended on an informal handwritten data collection system that made it hard to produce up-to-date, integrated information on the situation. In 2014, through a partnership between PLCN, faith-based NGOs Danmission and the Peace Bridges Organization, a local environmental rights NGO, Community Peace-Building Network, the University of Copenhagen and local IT company Web Essentials, a community-based monitoring mobile application was developed to address their needs.

The app — known as the Prey Lang App (PLA) — has gone through a series of redesigns through continuing engagement with community monitors, winning four international awards, and in 2019 was rolled out for use in another forest monitoring network, the Preah Rokar Forest Community Network. The PLA has been considered such a success, both by the PLCN and the researchers at the University of Denmark, specifically because community input was prioritized through a participatory needs assessment process, starting from its initial design and continuing throughout the multiple versions that were tested and tweaked through community feedback.

The app needed to be designed to meet the specific needs of local users, some of whom were illiterate or unfamiliar with smartphones, and at the same time reduce the lag between the collection and publication of content to ensure a reliable, up-to-date visual and audio database. Through using the Sapelli Platform, open source technology specifically designed for users with limited technological literacy, the team came up with a forest crime monitoring app that collected three types of information: reference data (metadata including time and date, GPS coordinates and phone ID), primary documentation data (incident documentation with photo and/or audio) and thematic tagging of the logged data. The newest version of the PLA includes tagging for activities (such as instances of illegal logging and hunting), resources (forest products used for cultural or livelihood activities), reporting(monitoring interactions with authorities) and climate (unusual changes in natural cycles and local adaptation strategies). The data is then automatically uploaded to a centralized online database using existing cell phone networks, which is then validated by a data management team at the University of Copenhagen and used to compile monitoring reports.

Security features in the PLA are relatively new, incorporated as a result of incidents of violence or threats of violence from loggers or local authorities against PLCN monitors. ‘The patrollers can report incidents of violence or potential threats that they received, from loggers, authorities or other groups’, explains Dimitris Argyriou, one of the project team members. ‘The entries can include information on the date and time of the incident, the location, the perpetrator, the people that were present at the incident and more.’

After the PLCN had used it for two years, the University of Copenhagen team analysed the app’s success and challenges in its practical application. They found that the monitors had made a total of 10,842 entries related to forest resources and illegal logging. Forty-two per cent (4,560) of these entries were validated by the external data managers, yet 46 per cent (4,979) were excluded because of a technical error, while only 12 per cent (1,303) were excluded because of a human error. 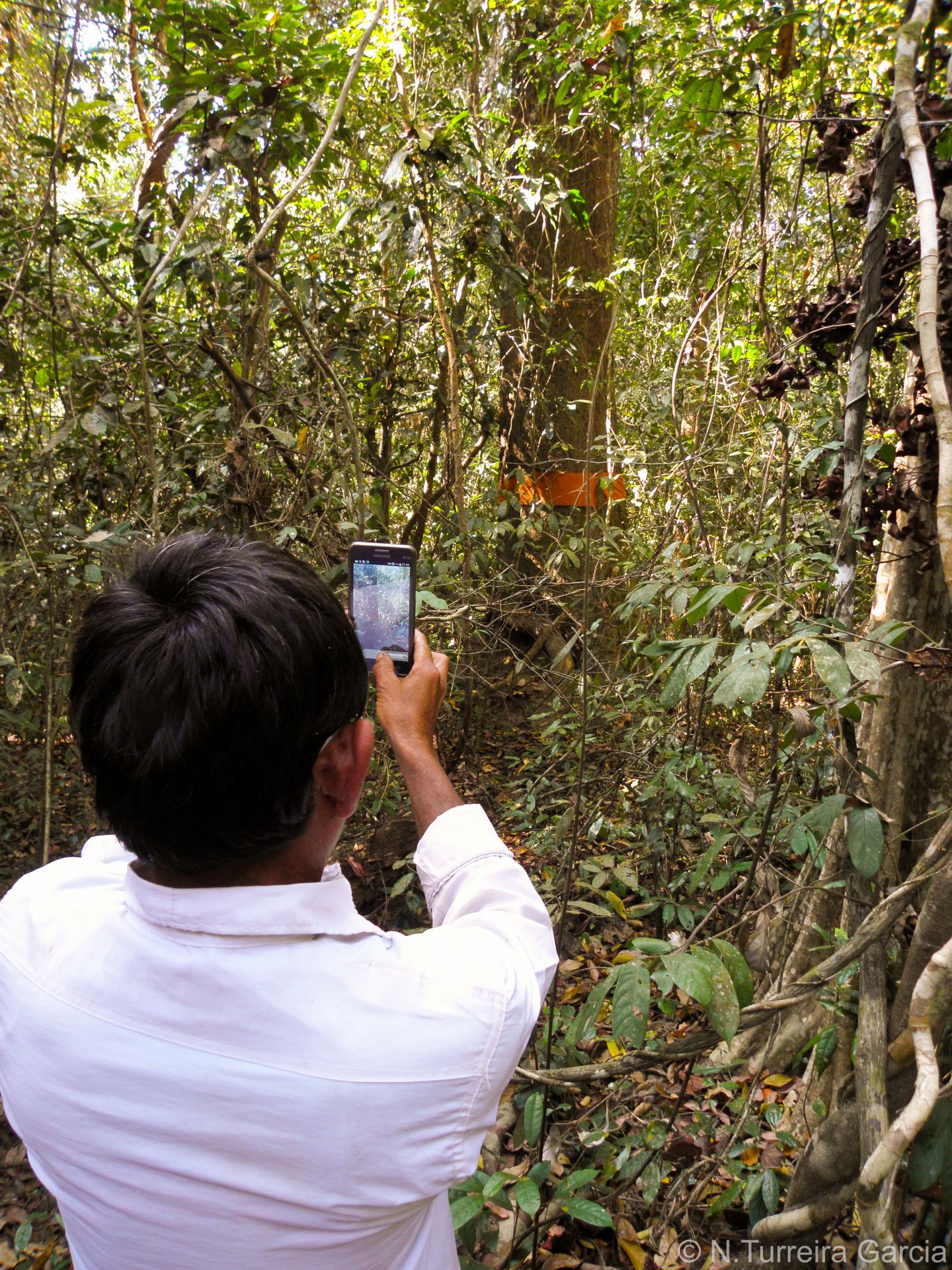 The main problem contributing to the technical errors was limited availability of a mobile network in the forest, which made it difficult to upload entries with multiple pictures. Lack of a reliable mobile network was also cited by forest monitors as a key drawback. One of the PLCN patroller survey respondents cited in the study commented: ‘It is not possible to get a signal in my village and I have to travel to Thala Barivat [Stung Treng Province] to get a signal strong enough to upload my data. Therefore, my phone memory is often full.’

Other issues cited in the study include challenges with long-term sustainability, including maintenance of phones and software, and the reliance on an external team to validate the digital data which could prove expensive. Overwhelmingly, though, the findings were positive, with the study reporting no significant problems in terms of the accessibility for the community despite its complexity. Furthermore, there appeared to be no meaningful differences in the proportion of validated entries across gender and age groups, overturning suspicions that the introduction of information technologies for monitoring would favour younger male users at the expense of other groups.

Besides rolling out the PLA to other community forest monitors in Cambodia, the team continues to strengthen the functionality of the app. ‘We are currently working to incorporate satellite-based information that will make the patrols more efficient’, Argyriou explains. ‘Also, we will try to identify the reasons for forest clearings as well as hot-spot areas for logging. We could definitely advance our user experience more and automate the data management web-app but these are secondary targets.’

As recognized by MRG and many other indigenous and environmental rights organizations, ensuring indigenous rights to land and resources is one of the most successful means to preserve the integrity of natural ecosystems, and technology such as the PLA is helping to realize that goal. The monitoring reports produced by the PLA are the most extensive source of data on illegal logging in the Prey Lang forest, offering an invaluable resource for advocacy and awareness raising. The app has also proven itself to be a cost-effective method of forest monitoring when compared to the use of professional forest rangers. As the indigenous Kuy of Prey Lang continue to struggle to secure official recognition of their collective stewardship and land tenure over their ancestral forests, the PLA is proving to be a crucial tool to advance that goal, establishing the necessary data collection systems to create an effective approach to forest management.