Cameroon: Confronting environmental injustice and illegal logging in the rainforest through indigenous-led technology

With its extensive forests, Cameroon has in recent years seen an increasing focus on conservation, encouraged by international organizations such as the Worldwide Fund for Nature (WWF). Yet, in the words of a young Baka man living in south-eastern Cameroon, close to the border with Congo, ‘the majority don’t have the knowledge of the forest and to heal the illnesses’. By Simon Hoyte.

With its extensive forests, Cameroon has in recent years seen an increasing focus on conservation, encouraged by international organizations such as the Worldwide Fund for Nature (WWF). Yet, in the words of a young Baka man living in south-eastern Cameroon, close to the border with Congo, ‘the majority don’t have the knowledge of the forest and to heal the illnesses’. By Simon Hoyte.

He understands all too well the contradiction of forest conservation in Central Africa: that those who interact most intimately with the forest and hold the necessary knowledge to sustain it are almost entirely excluded from contributing. The entirety of Cameroon’s forest estate is under government ownership, with more than a third allocated as private logging concessions and most of the remainder annexed as people-free wildlife reserves. Such zoning has forcibly evicted indigenous Baka communities from their ancestral forests to roadsides, leading to widespread exclusion from the forest resources which the Baka rely upon not only for subsistence and medicine, but also as the basis of their worldview, identity and spiritual beliefs.

Baka are one of Central Africa’s indigenous hunter-gatherer communities, surviving entirely within the rainforests shared between Cameroon, Gabon and Congo-Brazzaville. Alongside the San population of southern Africa, they are one of humanity’s oldest contemporary peoples and have consequently accumulated an incredibly intricate ecological knowledge of these forests. This is most apparent through their language — for example, Baka have over 28 words to describe elephants, depending on their age, sex, health and relationship to both other elephants and humans, as well as 19 words for gorilla. There is a specific word for the time, in the late afternoon, when honeybees leave their hive and search for nectar in the forest (mòngombe), and for the noise of honeybees early in the morning (màkelo). One Baka village has cited 624 different species of medicinal plants and 580 plants on which they rely for sustenance. Elders and youths alike have sophisticated spatial knowledge of where these plants grow and where animal species congregate, and at what specific times of the year. Such knowledge is not held in isolation from the forest but relies on constant interaction: after all, the best way to find wild safa yams is by following the calls of the sangòngò bird. 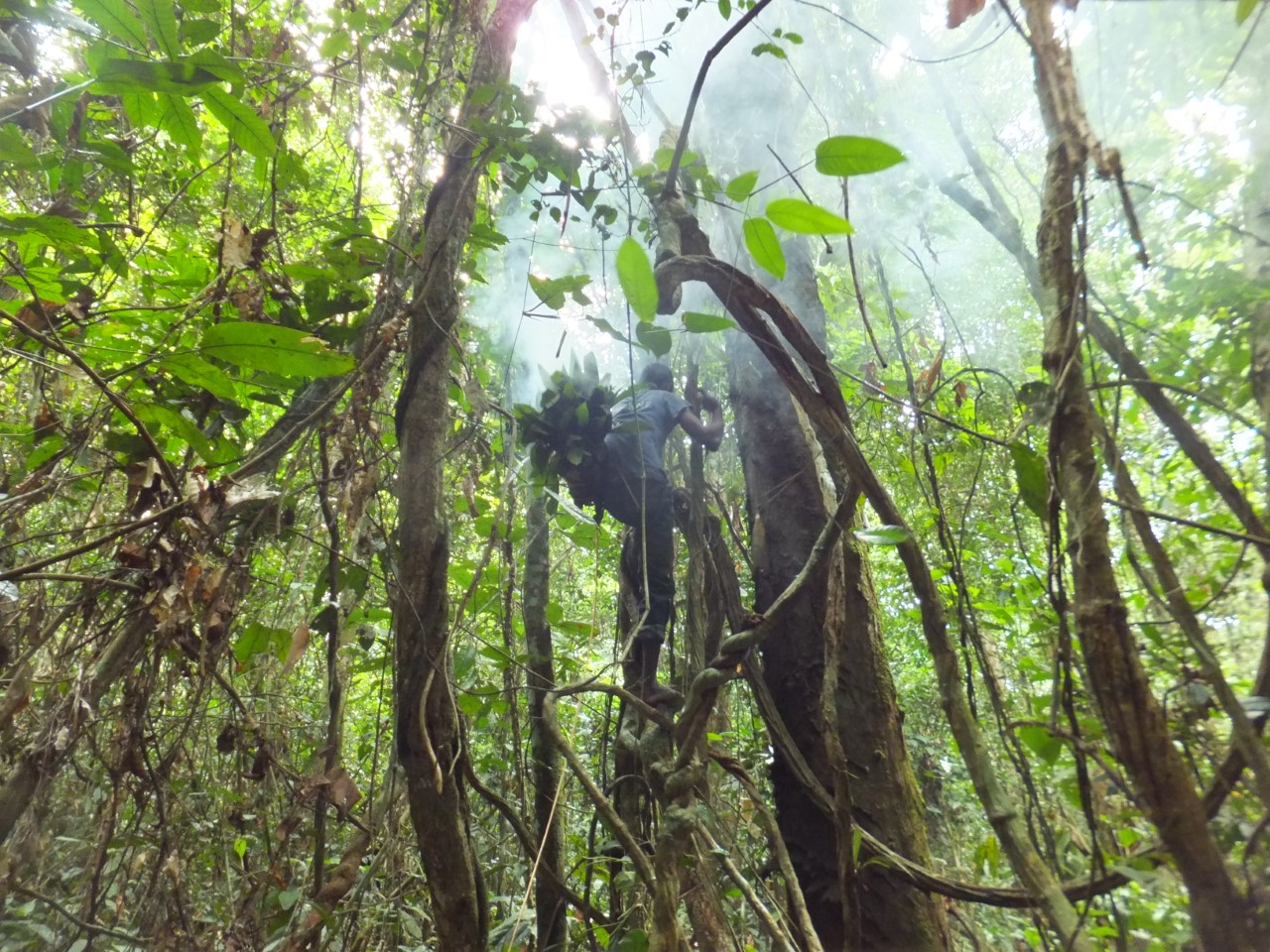 When it comes to protecting the forest from wildlife crime and deforestation, a legacy of French colonial management with overarching power renders indigenous knowledge inferior to that of ‘experts’ and the state. Interestingly, the problem locally is often not that the Baka are not considered part of the forest, but the opposite: as forest dwellers, they are regarded as being too poorly educated or ‘lazy’ to meaningfully take part in forest conservation. With studies showing that indigenous-led conservation is equally or more effective at safeguarding biodiversity than that led by outsiders, and that exclusion is more likely to drive communities into illegal activities, it is unfortunate that conservation authorities and non-governmental organizations (NGOs) in this region still largely practise such ‘conservation from above’.

If forest managers sat and listened to Baka voices, they would quickly hear: ‘Outsiders are destroying the forest while local people need it for subsistence’, ‘The government needs to know our capacity to protect this forest’, but ‘We are not empowered to stop such activities.’ The design of mainstream conservation models inhibits Baka involvement because they rely on high levels of literacy and pre-designed, expensive missions. But participative technology is changing this.

To take action on community concerns, participative mapping projects have been launched with eight communities in collaboration with the Extreme Citizen Science group (ExCiteS) based at University College London. Mapping has emerged as a powerful way to connect indigenous knowledge and values with decision-makers who might otherwise ignore or struggle to interact with them. If the process of mapping is done in an inclusive manner, whereby communities are involved in what to map and why, it can serve as a significant tool for empowerment.

Government hunting restrictions imposed on the Baka made communities initially wary of the project: ‘Will the technology tell us what we can and can’t hunt?’, one community member asked. But by prioritizing the communities’ concerns and leadership, it quickly became clear to all that they themselves are in control of what the technology is used for. The smartphone software developed by ExCiteS, Sapelli, enables this through a process of ‘co-design’. Not only is the concept of the project informed by local concerns, but the physical design of the user interface is led by community members. Icons are used instead of text so that barriers of illiteracy are overcome. Because being invited to participate is so rare, there is often surprise, and even a great deal of laughter, when it is recommended that participants draw icons themselves, whether it be in a notebook, using a stick to draw on the ground or making animal prints in the mud. While the process builds trust with community members, most importantly it ensures that icons are locally relevant and distinguishable, and creates a sense of ownership: in the words of Monjombe*, a Baka elder, ‘All our hearts are in it.’ On seeing their own icons in the Sapelli smartphone app for the first time, there can be disbelief and excitement that they have co-created this technology.

Deciding on what to include together creates a space for the community to decide on their priorities and suggest innovative ideas to achieve them. In one meeting, an elder asked if they could also use the phone to monitor animals in order to produce a map of their distribution. This idea was subsequently shared with other communities, all of which decided that they too would like to monitor animals. Going against widespread bad practice, a community protocol is formed by each community on how exactly the data will be collected, who it will be shared with and, most importantly, what it will be used for. Unintended negative outcomes from the data collection must be discussed and mitigated through each community’s protocol. One community member, for example, expressed his concerns about how the data could be co-opted by officials with their own agenda: ‘I am worried that if we map interesting animals the authorities will expand the park.’

Most communities decided they wanted to make reports of wildlife crime, such as poachers’ shelters, gun cartridges and killed animals, but this renders them at risk from reprisals, as one community pointed out: ‘Such a project could put us in serious trouble with the Bantus [the dominant local group]’ and ‘When the information is sent, how do you keep us secure?’ As a result, multiple security techniques were established, including anonymizing the users through a colour ID system. The posing of these sorts of questions is a good indication that the community has understood the potential risks of the project — an important part of the free, prior and informed consent process. Feeling satisfied after this process, a Baka man said: ‘What we could not openly speak about, we can now report.’

Physically handling smartphones and practising the creation of audio clips and photos — the first time many had heard their own voice or seen themselves in a photo — proved to be an empowering experience even before any data had been collected. Baka are not regarded as trustworthy by forest managers, as confirmed by the responses of NGOs and government officials to the project team members: ‘They will steal and sell the phones!’ Such attitudes have been a major barrier for Baka to access these technologies until the project began.

Challenges such as charging the devices and preventing damage are easily solved with portable solar chargers and by choosing rugged, waterproof phones. Community elders often have highly callused fingers, an impediment to using the phone’s touchscreen, but this has been overcome through light-hearted sessions of testing the use of knuckles or noses as a replacement. After taking a report, audio clip and photo using Sapelli, the data is stored on the phone until it can send to a secure database. Sapelli exploits pockets of mobile network in the forest by attempting to send the data by mobile internet and SMS every five minutes.

When data is received by members of the ExCiteS team, community protocols are consulted. Most often, wildlife crime data is accumulated on an online map, which reveals hotspots across the landscape and provides local knowledge on the realities of the wildlife trade. Animal monitoring data, usually in the form of recorded footprints, gorilla nests, chimpanzee cries, pangolin burrows or elephant paths, is added to the map and utilized for more efficient conservation planning. Over 1,100 data points, supported by 1,210 photos and audio clips, have so far been taken since the project began in 2017: the majority of communities have agreed to pass this on to ExCiteS researchers and conservation workers in the region to support their efforts to tackle wildlife crime. This is changing things on the ground – some villages see more wildlife and fewer traffickers, and all have experienced a sense of empowerment. In the words of Kelepa, a Baka community member: ‘It shows our ability to work, to be part of it and show we are not lazy.’ However, these technological solutions can only achieve so much in a context where corruption, poor governance and discrimination remain pervasive. It is to be hoped that this wealth of data can support more systemic change, particularly in the form of land and access rights for the Baka.

* All the names in this case study have been changed to protect the anonymity of respondents.