Migration is part of the history of humankind: movement has always been a crucial factor in human survival. Although global migratory processes are not new, the world has entered an unprecedented period of human mobility, with the total number of international migrants reaching over 272 million in 2019 – around 3.5 per cent of the world’s population, the highest number of international migrants ever recorded. Although different economic, political and social factors have played a role in this development, one element that is transforming migration at all levels is the use of information and communications technologies (ICTs). By Michele F. Ferris Dobles.

Migration is part of the history of humankind: movement has always been a crucial factor in human survival. Although global migratory processes are not new, the world has entered an unprecedented period of human mobility, with the total number of international migrants reaching over 272 million in 2019 – around 3.5 per cent of the world’s population, the highest number of international migrants ever recorded. Although different economic, political and social factors have played a role in this development, one element that is transforming migration at all levels is the use of information and communications technologies (ICTs). By Michele F. Ferris Dobles.

Central America, a narrow isthmus located between continental North America and South America, is composed of seven countries: Belize, Costa Rica, El Salvador, Guatemala, Honduras, Nicaragua and Panama. A particularity of this region is that it presents very dense migratory flows – in fact, it is the largest migratory corridor in the world – with many heading to the US: some 3.5 million Central American immigrants are now estimated to be residing in the country. Large-scale migration began in the region in the 1970s and 1980s, during a period of widespread political uprisings and civil wars, continuing into the 1990s and 2000s as a result of violence and structural problems, including limited access to public services such as education, high unemployment and poverty. Central America also has some of the highest murder rates and number of gangs in the world, as well as deep social inequality and corruption, crucial factors that deepen social exclusion and drive people’s decision to migrate.

Despite the fact that Central Americans are fleeing extreme situations of violence, they are still considered ‘economic migrants’ by the Mexican and US governments: this means they are categorized as migrating for economic purposes and not for survival, which makes it extremely difficult for them to apply for asylum and refugee status. This situation leaves them highly vulnerable as, without legal resources or protection, they are targeted by both authorities and criminal organizations. In this context ICTs take on a particular significance, enabling migrants to exchange messages and receive vital information as a means of avoiding deportation and other dangerous situations. In addition, given their very limited opportunities for securing refugee status or residency in the US, Central American immigrants are not in a position to visit their home countries – a condition that makes mediated relations and communication through technology essential for fostering family bonds across space and national borders.

At every stage of the migration process, from the journey itself to the everyday difficulties of life as an undocumented immigrant, technologies play a central role. For migrants themselves, the benefits and challenges go hand in hand, offering valuable sources of information and social support while also putting them at even greater risk of surveillance, deportation and criminal violence.

The social and collective organization of transnational migration has changed profoundly with the advance of ICTs. One of the most striking and widely publicized instances of this is lascaravanas migrantes, the so-called ‘migrant caravans’ that dominated headlines in US media in 2018 and were frequently invoked by President Donald Trump as a national security threat. Comprising thousands of men, women and children from Nicaragua, Honduras, El Salvador and Guatemala, the caravans primarily relied on mobile phones and applications such as WhatsApp to enable migrants making the long journey across Central America to the US to achieve safety in numbers and avoid the depredations of criminal gangs along the way. The caravans also served as a means to highlight the reality of families and communities displaced by protracted violence in their countries of origin: though grossly misrepresented by certain media outlets and vilified by right-wing politicians within the US, they nevertheless succeeded in attracting global coverage and increasing international awareness of their plight.

More generally, ICTs have amplified and intensified the ways people communicate, interact and organize across national borders. This situation, while bringing many benefits for people on the move, has also created greater demands and expectations within migrant networks, at times provoking feelings of stress and anxiety around the need to be constantly available through these technologies. In this manner, faster and more frequent connectivity does not necessarily make transnational migration an easier or less painful experience. It is crucial to remain critical about the effects of ICTs, as the challenges of separation that many migrants face are not automatically alleviated by smartphones and social media.

Another important change that ICTs have brought to the traditional patterns and trends of migration is how they can shape, in real time, the migratory journey itself. Smartphones are locative and portable media: this means that, besides enabling connectivity and communication with friends and family, they are useful tools for navigation and information sharing during transit. This has meant that established migration pathways have now been redirected to follow paths of connectivity, with migrants favouring travel through areas where they can access an internet connection. In the process, every aspect of their journey has been transformed, from the physical routes they take to the ways they spend their money.

Through their smartphones, migrants have never had so much information at their fingertips, but at the same time they have never been so exposed to so much surveillance. In this regard, it is important to recognize that having access to a mobile phone and connectivity does not necessarily make the migrant journey easier, particularly as others have also been quick to exploit these technologies for their own gain. For Central American migrants making the hazardous journey through Mexican territory, the threat of kidnapping and torture by organized criminal gangs is exacerbated by the collusion of corrupt police officials: when apprehended by gangs or the authorities, migrants are frequently asked to hand over their mobile phone in order to call family members in Central America, who are then coerced into sending money to secure their loved one’s release.

Thus, while providing many benefits, mobile phones also pose new dangers for migrants. Once in the US too, these technologies can prove double-edged — offering a vital line of contact to the families and friends in their countries of origin, but at the same time increasingly coopted by migration agencies as a tool of coercion.

Life in the US as an undocumented migrant 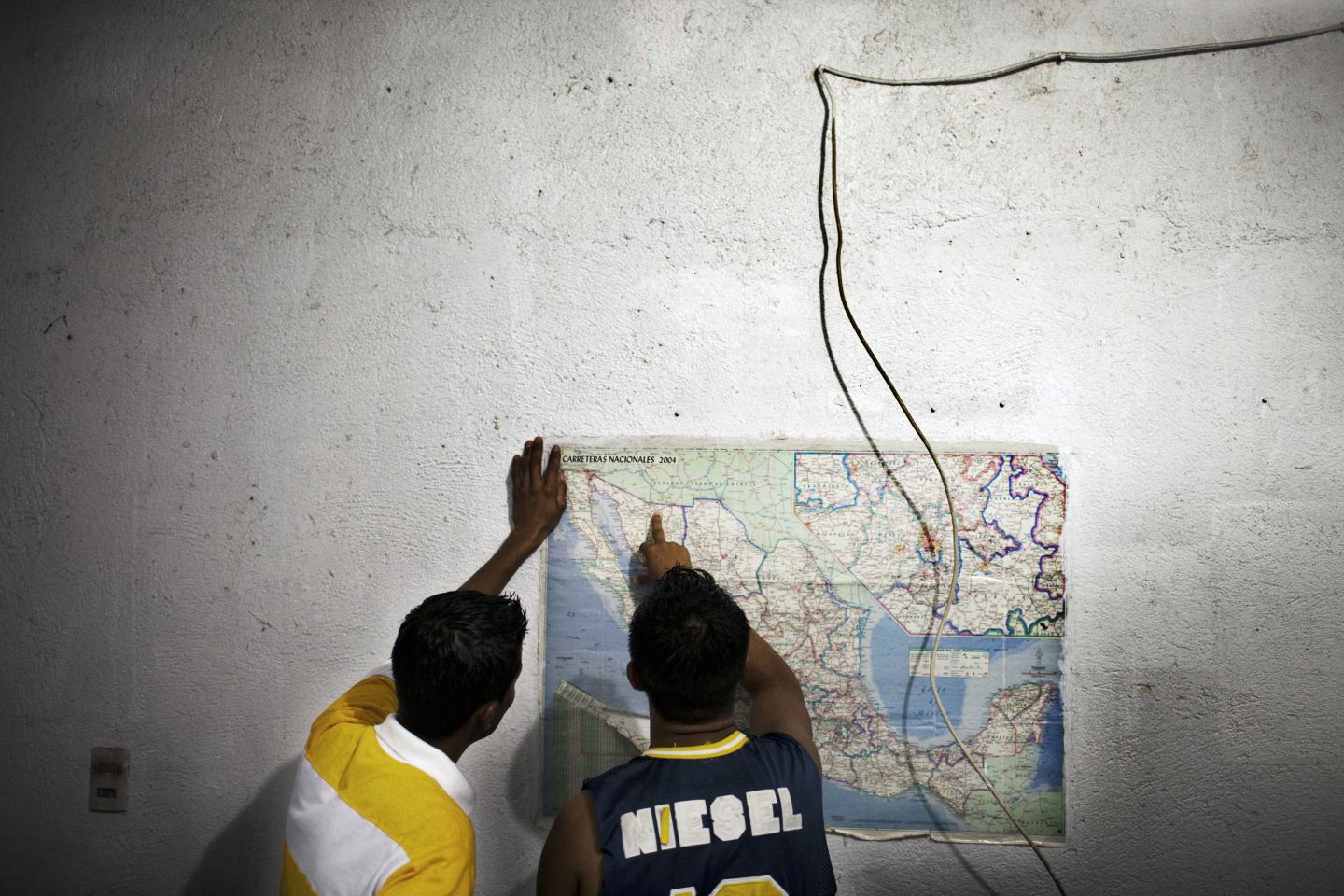 Two migrants check a map at a migrant shelter in Arriaga, Chiapas. It is estimated that half a million migrants from Central America cross Mexico each year. Arriaga, Mexico / Markel Redondo/Voces Mesoamerica

Even once they have reached the US, Central American migrants continue to face profound challenges on a daily basis. Without documentation, their lives are frequently characterized by insecurity, isolation and the constant threat of deportation. Within this context, smartphones and social media have become important tools to cope with the difficulties of family separation, discrimination and persecution.

For migrants in the US, thousands of miles from their loved ones and with little prospect of seeing them in the foreseeable future, the mobile phone has become a crucial device for maintaining affective bonds across ‘the wall’ and national borders, a ‘virtual proximity’ that enables them to remain connected with their countries of origin. Through the use of ICTs, migrants create their own meanings that go beyond those designed by the developers of the technology, and that instead are created by their own needs, expectations and perceptions.

In the past, to remain connected, migrants and their family members in their countries of origin had to wait a long time to receive a letter in the mail or coordinate international phone calls that might happen once a month – both time-consuming and expensive options. ICTs now allow transnational communication and social interactions to be part of ‘everyday’ life, transforming the nature of the migrant transnational networks and their connections with their families. Migrant families and networks have never had so many possibilities within their interpersonal relationships for interaction and sharing.

Yet while migrants use technology to foster and strengthen their transnational networks and as devices for safety, information sharing and communication, government agencies and corporations have exploited ICTs for their securitization of the migration agenda. Indeed, the US government has invested millions of dollars in law enforcement, migrant prisons, tracking technologies and deportation facilities. In early 2020, for example, it was reported that the Trump administration had purchased data relating to millions of smartphone users from Venntel Inc. specifically for immigration enforcement purposes. Having acquired this data, federal agencies can access personal information collected through everyday use of smartphone apps in order to track undocumented migrants. The Immigration and Customs Enforcement (ICE) and Customs and Border Protection (CBP), two divisions under the Department of Homeland Security (DHS), are reportedly now using this data to locate and arrest undocumented migrants in the US. This is far from being an isolated case: the data mining company Palantir’s ‘Investigative Case Management’ (ICM) system has reportedly been used by ICE to track down, incarcerate and deport migrants, with activists accusing Palantir and other corporations which have supported its operations, including Amazon which hosts the ICM system on the servers of its Web Services division, of being complicit in the mistreatment of migrants in the US.

ICTs and migration: a mixed picture for migrants

Whether making the perilous journey across Mexico or living in the shadow of surveillance in the US, technologies are both a blessing and a threat. Every undocumented migrant must reconcile these tensions and contradictions. The smartphone, for instance, can provide safety, information and emotional support while simultaneously provoking feelings of pain, guilt and frustration. It also brings new dangers and forms of exploitation. The study of the interconnections between ICTs and migration should recognize these complexities, as they are intertwined in the experiences of thousands of people migrating from Central America and elsewhere.

As with so many aspects of the migration experience, there are no easy answers. While violence and insecurity in Central America persist, migrants will continue to make the difficult journey to the US – and ICTs, whether as their ally or enemy, will be with them every step of the way.

Photo: Luis, from El Salvador, speaks to his daughters who are in the USA, from where he was deported. Arriaga, Mexico / Markel Redondo/Voces Mesoamerica