Ecuador: Indigenous activists are finding ways to use technology to secure their rights – but barriers remain

Like many countries across Latin America, Ecuador is still struggling with the legacy of colonialism and the marginalization of its indigenous population. For decades, indigenous Ecuadorians have mobilized against the country’s entrenched hierarchies and inequalities, with considerable success. One of the most significant milestones was the drafting of a new national Constitution in 2008, approved by referendum, that explicitly recognized the collective rights of its indigenous peoples, as well as its long-excluded Afro-descendant community. By Gilda Paulina Palacios Herrera.

Like many countries across Latin America, Ecuador is still struggling with the legacy of colonialism and the marginalization of its indigenous population. For decades, indigenous Ecuadorians have mobilized against the country’s entrenched hierarchies and inequalities, with considerable success. One of the most significant milestones was the drafting of a new national Constitution in 2008, approved by referendum, that explicitly recognized the collective rights of its indigenous peoples, as well as its long-excluded Afro-descendant community. By Gilda Paulina Palacios Herrera.

Among other provisions, it acknowledged their unique identities, land ownership and their right to live free from racism, as well as the state’s commitment to ‘uphold, protect and develop collective knowledge’, including ‘their science, technologies and ancestral wisdom’. This last formulation is particularly striking, given the tendency for governments across the world to disregard traditional knowledge systems or, at best, see them through a folkloric lens – rather than accept them as living, contemporary worldviews with urgent relevance to many of today’s most pressing challenges.

Despite the apparent progress signified in the 2008 Constitution, Ecuador’s indigenous peoples – numbering some 1.1 million from a total of 14 distinct communities – are still struggling to secure these basic rights and freedoms. Their continued exclusion is reflected in the fact that almost two-thirds of indigenous Ecuadorians are living in poverty – a proportion that is three times higher than the level among their mestizo counterparts. This deprivation is in large part rooted in the dispossession of their most precious resource, their ancestral lands, and with it the rich biodiversity that for centuries has sustained their cultures, livelihoods and spiritual values.

The latest chapter in this saga of exploitation and discrimination is the threat posed by Ecuador’s growing mining sector as companies, with the support of the state, have encroached on indigenous peoples’ communal territory to extract oil, copper, silver, gold and other natural resources. In opposing these activities and their devastating impacts on health, food security and the environment, indigenous activists have complained that they have been typecast as being ‘anti-development’ – a common trope that seeks to frame indigenous resistance as a movement against technological progress. At times, international supporters of threatened communities may unwittingly use the same dichotomy by contrasting indigenous traditions with the destructive impacts of corporations uprooting ecosystems for rare metals and fossil fuels.

While it is true that communities draw on long-standing knowledge and practices around environmental stewardship, indigenous perspectives in Ecuador and elsewhere are not static and continue to evolve. This is demonstrated by the use of new information and communication technologies (ICTs) by many indigenous Ecuadorians, despite significant inequities in access, including in human rights activism and community mobilization. This was evident in October 2019 during widespread demonstrations against a package of austerity measures proposed by the Ecuadorian government. Led by indigenous protesters, the demonstrations eventually pressured the government to abandon its planned rollback of public services. Their success was due in part to the effective use of social media, such as documenting incidents of violence by soldiers against civilians during the unrest. 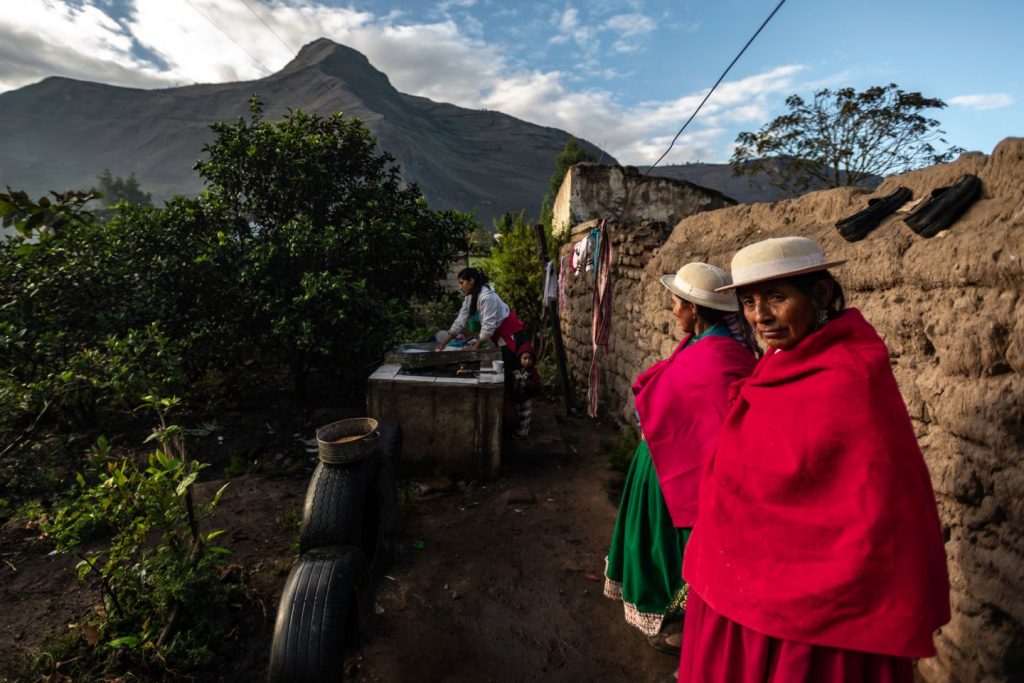 Indigenous women stand outside next to a wall in Chimborazo, Ecuador / Stephen Reich

It is true that new technologies, including the internet, can pose a threat of acculturation as individual languages and cultures are side-lined by globalized media and entertainment. Nevertheless, Ecuador’s indigenous organizations have found ways to repurpose these technologies to overcome such barriers. For example, in response to the lack of widely available information on the Covid-19 pandemic for non-Spanish speakers, the Confederation of Indigenous Nationalities in Ecuador (CONAIE) has been translating advice from the World Health Organization and disseminating it to communities using the hashtags #WasipiSakiri and #JeminPujusta, translating to ‘Stay at home’ in Quichua and Shuar respectively.

While celebrating these activities, however, it is important to acknowledge the fact that the inequalities that indigenous Ecuadorians experience in other areas of their lives are also reflected in their access to new technologies such as laptops and smartphones. Affordability remains a critical issue for many poorer citizens, including a significant proportion of indigenous people, a situation reinforced by their educational exclusion. These disparities are especially stark for certain groups within the indigenous population, such as people with disabilities, who experience multiple forms of discrimination: the proportion of those with disabilities among the indigenous population is significantly higher than among the non-indigenous population.

Some commentators have expressed concern that, if unequal access to ICTs among indigenous Ecuadorians persists, then their power to drive social change may in the future diminish. After everything that has been achieved in the last few decades, this would be disastrous. What we must do now is focus our efforts on improving access for all Ecuadorians to ICTs, but with a particular focus on ensuring that the disproportionate gaps experienced by indigenous peoples, those with disabilities and other marginalized groups are eliminated. This, more than anything, would demonstrate real progress – an approach where technological development and social inclusion go hand in hand.