In conflict zones around the world, violations against minorities are often an inseparable element of the core conflict dynamics. States and armed groups will often harness long-standing tensions and stoke hatred against minorities as they vie for power and resources, while the escalation of conflict can exacerbate the vulnerability of already-marginalized groups. By Miriam Puttick.

In conflict zones around the world, violations against minorities are often an inseparable element of the core conflict dynamics. States and armed groups will often harness long-standing tensions and stoke hatred against minorities as they vie for power and resources, while the escalation of conflict can exacerbate the vulnerability of already-marginalized groups. By Miriam Puttick.

In Iraq, for example, the rise of the so-called Islamic State of Iraq and al-Sham (ISIS) and other armed groups from 2014 onwards saw patterns of marginalization of the country’s ethnic and religious minorities transform into widespread attacks and even genocide against those communities. Ethnic and religious minorities were uprooted en masse from their historical homelands and subjected to violations, including killings, abductions, property destruction, and attacks on their religious and cultural heritage. Footage of these atrocities was disseminated widely across social media platforms, which ISIS used with shocking efficiency to spread its ideology and recruit new members.

Monitoring violations of human rights and international humanitarian law in conflict zones often poses immense challenges. For one thing, the existence of armed violence often prevents human rights organizations, journalists, UN agencies and others engaged in monitoring from accessing the territories where violations are occurring. Local human rights actors, for their part, may become displaced or preoccupied with their own survival needs. When they do choose to continue their work, they operate at increased risk to themselves, often facing death threats from armed groups for speaking out or exposing violations. In situations where minorities are disconnected from centres of influence or lack organizations defending their rights, violations can go completely unreported. Moreover, the high degree of political polarization that accompanies conflict and attempts by various actors to control the narrative of events often lead to difficulty in gathering accurate and impartial information on the human rights situation.

However, this does not mean that there is no information being produced in such settings. Thanks to the spread of mobile internet, social media platforms and smartphone technologies, ordinary civilians are able to document developments on the ground and share them with the outside world at the click of a button — even in the world’s most dangerous conflict zones. Facebook, YouTube and other social media platforms are often awash with first-hand information, photos and videos coming directly from witnesses to violations. The content of social media is becoming difficult to ignore, as seen in the rise of open-source intelligence (OSINT) approaches. However, this content is often not in a format that can be harnessed effectively for human rights advocacy. Information shared online can be difficult to verify and often lacks crucial details needed to establish the nature of the violation and hold perpetrators to account. Moreover, intersecting privacy rules on a multitude of platforms mean that vast amounts of data are often not easily accessible to relevant human rights actors, such as international bodies. 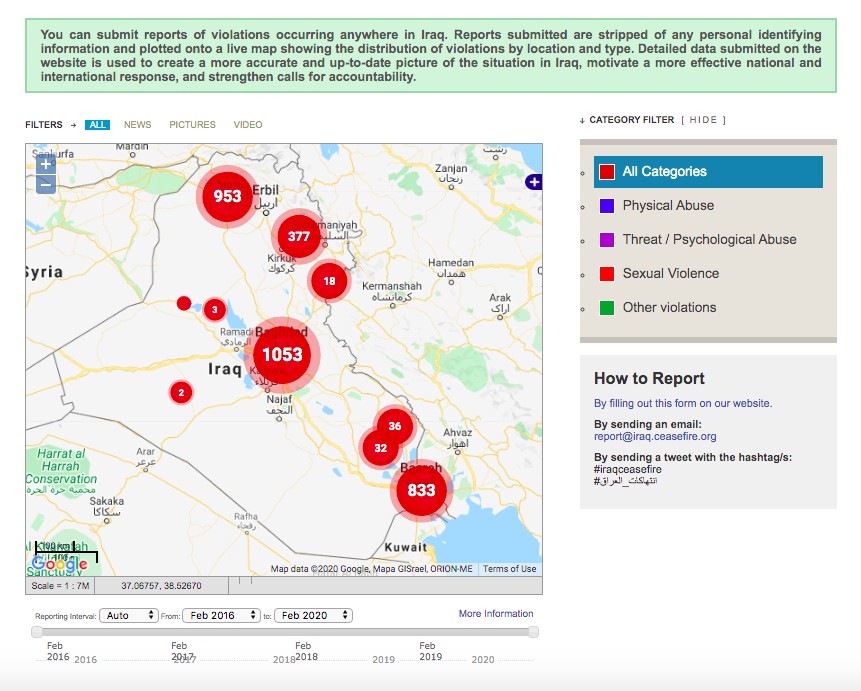 These challenges provided the impetus behind the creation of the Ceasefire online reporting tool, a digital platform that seeks to enable ‘civilian-led monitoring’ of violations of human rights and international humanitarian law in conflict settings. Piloted in Iraq as part of a joint project by Minority Rights Group International (MRG) and the Ceasefire Centre for Civilian Rights, the tool seeks to bridge the gap between traditional human rights data collection and unbounded crowdsourcing. Though accessible to anyone with an internet connection, the tool prompts users to report violations in a way that conforms with international legal standards and increases the future usability of the data.

The core component of the tool is a bilingual (Arabic-English) reporting form, which permits users at a minimum to specify the title, description, category and location of the human rights violation. The category function, which prompts users to choose from a predefined list of internationally recognized human rights violations, enables easy analysis and filtering of the data. In addition, the expanded version of the form asks for additional details about the victim, witness, consequences, motive and perpetrator of the violence, prompting users to supply information that could be important in determining the nature of the abuse according to international standards. For example, users are asked to give any details that would suggest the attack was carried out due to the victim’s ethnicity, religion or culture – which can be used to establish the threshold for hate crimes, ethnic cleansing or genocide. Users can also attach photos and other documentary evidence to their reports or include links to YouTube footage or media coverage, which helps make the information verifiable.

Reports submitted through the form are stripped of personally identifying information and plotted onto a live, interactive map visible on the tool’s landing page, which shows the distribution of violations by location and type. Sensitive data, such as names and contact details of victims, witnesses and perpetrators, is stored securely on a secondary server in case it is needed for future follow-up or court proceedings.

However, civilian-led monitoring is not simply about providing new technological tools – it is also about empowering civilians themselves so they can use such tools effectively. Through partnerships with human rights NGOs, including minority-led organizations, MRG and Ceasefire conduct regular in-country training events for civilian activists. At the training sessions, participants are not only taught how to use the online tool, but also given a thorough grounding in international human rights concepts and components of strong human rights reporting, including interview techniques, victim protection practices and verification strategies. Also known as ‘bounded crowdsourcing’, the logic of training smaller groups, who in turn train others, leads to the formation of a critical mass of skilled activists and organizations and results in a higher quality of human rights documentation.

Since the tool’s launch in February 2017, more than 3,700 violation reports have been submitted by civilian activists. The online tool has thus served as a window into patterns of violations taking place as part of the conflict in Iraq that would otherwise go unreported. For example, through long-term partnerships and trainings with women’s rights activists in Iraq, the tool has enabled the production of detailed information on the relationship between armed conflict and family-based violence, an under-studied and under-documented phenomenon. These cases led to the publication of a series of three reports on the topic, and the design of new interventions providing direct support to refugee and displaced women facing gender-based violence.

In situations of escalating violence, the online tool offers the possibility of obtaining crucial information from the ground in real time. When large-scale protests erupted in Iraq in late 2018, reports of excessive use of force by security forces against peaceful protesters began to appear on the online tool. These cases were incorporated into a wider report on repression of civilian activists in Iraq, which was then used as a basis for urgent appeals and advocacy pushes at the UN Human Rights Council and in other forums.

According to the director of an Iraqi NGO, the value of the online tool lies in its ability to function as a secure outlet for activists engaged in human rights documentation in highly volatile contexts. ‘In the current situation in Iraq, the major risk facing human rights activists and defenders is reporting violations. Many activists have faced threats and blackmailing for their reports, particularly if their identity is revealed. The online tool helps them prevent these risks as they easily use the tool and it is anonymous.’

Building on its initial successes in Iraq, the tool has since been expanded to other contexts in the region. Following the Turkish invasion of Afrin in north-western Syria and the mass expulsion of the city’s mainly Kurdish population, the tool served as a crucial platform to document the violations taking place against the population of the area in the midst of a near-total media blackout. According to a Syrian Kurdish activist from Afrin, ‘Up to now, all independent journalists are barred from entering Afrin, so there are no media or human rights reports covering the situation there. With the Ceasefire tool, we were able to design forms specific to the area and give people on the ground the option of reporting violations over the internet. As a result, we are monitoring the situation without exposing researchers to the dangers of entering the territory.’ Civilian activists were also able to uncover patterns of attack by Turkish-backed Syrian armed groups against Yezidi, Christian and Alawite villages around Afrin, about which very little is known internationally.

While the online tool has provided a way to surmount some of the obstacles to human rights monitoring in conflict, the work has not been without its challenges. Despite all reassurances of confidentiality, victims can still be afraid to report violations — fearing backlash from their families, their communities or armed groups. Where the authorities deliberately shut down or throttle internet access, there can be delays in urgent reports being uploaded online. Moreover, in situations of prolonged violence, even the most committed activists can begin to lose hope that an end is in sight — decreasing their motivation to go on with the documentation work. These challenges prove that technology alone is not enough to resolve the enduring problems of human rights. Sustainable change is unlikely to be achieved unless technology is deployed in conjunction with other measures — from political pressure to legal advocacy and education. However, harnessing technology as part of a multi-pronged approach can offer a modern strategy for dealing with modern challenges, which continue to change the landscape of human rights activism.

Photo: Yazidi men rebuild religious temples that were destroyed by ISIS in the town of Bashiqa, Iraq / Andrea DiCenzo/dpa