Tanzania: For people with albinism, hate speech and discrimination have moved online

In Tanzania, being born with albinism is the beginning of a lifetime of discrimination on multiple fronts. Ordinarily, people with albinism are impaired physically because their skin, eyes and hair lack melanin — the pigment that keeps ultraviolet rays from damaging DNA and vision, and potentially causing skin cancer. Moreover, due to negative social attitudes towards people with albinism, their full and effective participation in society is compromised. By Hamimu Masudi.

In Tanzania, being born with albinism is the beginning of a lifetime of discrimination on multiple fronts. Ordinarily, people with albinism are impaired physically because their skin, eyes and hair lack melanin — the pigment that keeps ultraviolet rays from damaging DNA and vision, and potentially causing skin cancer. Moreover, due to negative social attitudes towards people with albinism, their full and effective participation in society is compromised. By Hamimu Masudi.

According to Standard Voice, a NGO based in Tanzania, only half of children with albinism complete primary education and just 1 in 10 transition to secondary school.

In the worst case scenario, people with albinism may even be at risk of human sacrifice. This grisly practice, rooted in widespread superstitions that the body parts of people with albinism have magical powers, is thought to have claimed nearly 80 people’s lives since 2000, with many others subjected to violent attacks. The majority of victims are children. According to the United Nations, ritual attacks against the community have been fuelled by fortune seekers, with victims kidnapped and their bodies dismembered by hired killers. After an upsurge in murders, the government of Tanzania weighed in to avert the terrible impact of such superstitions and banned witch doctors, the suspected culprits. However, people with albinism continue to live in fear and suffer deep-seated prejudice throughout their lives. Born in 1998 with albinism, Emmanuel Silas Shadrack is no stranger to discrimination. Yet against all the odds, Emmanuel — who is also a music artist known by the stage name Mr Tiger — has risen from obscurity to become a well-known figure in Tanzania, following his inauguration as the first Mr Albinism East Africa in December 2018. ‘After an intense competition, all the way from my home town of Geita in north-western Tanzania to Nairobi, Kenya, I was declared Mr Albinism East Africa,’ he recalls. ‘I was overwhelmed and I remember returning back home, and at the border crossing with Kenya, I received special attention — that is unaccustomed to people with albinism, like myself. On this occasion, my status had raised, after the whole world watched me on TV and social media.’

As a result of his win, Emmanuel saw a surge in the number of followers and likes on his social media accounts. ‘During the contest I received a lot of positive comments [on social media accounts] wishing me good luck. And this increased several fold after I won the contest. I had to show gratitude and took time to respond to each and every comment, thanking my fans for the support, as much as I could’, he added.

The youngest of a family of five, Emmanuel’s mother passed away early in his life, and together with his other siblings he was raised by his father. As a child with albinism, the challenges he faced were considerable. In 2008, for instance, his father had to make the difficult decision to move house to a safer neighbourhood after he survived an abduction attempt.

‘It was tough for me, because I grew up during the time people with albinism were being hunted for the trade in our body parts. I was in class three when the issue became widespread and I could see that my own community was keeping a distance from me. No one wanted to be seen closer to me at any time because they didn’t wish to be suspects or witnesses, in case I was abducted. They would hold community meetings over me and put pressure on my dad to remove me from the locality or hand me in to police for protection. It was about their safety, not mine.’ 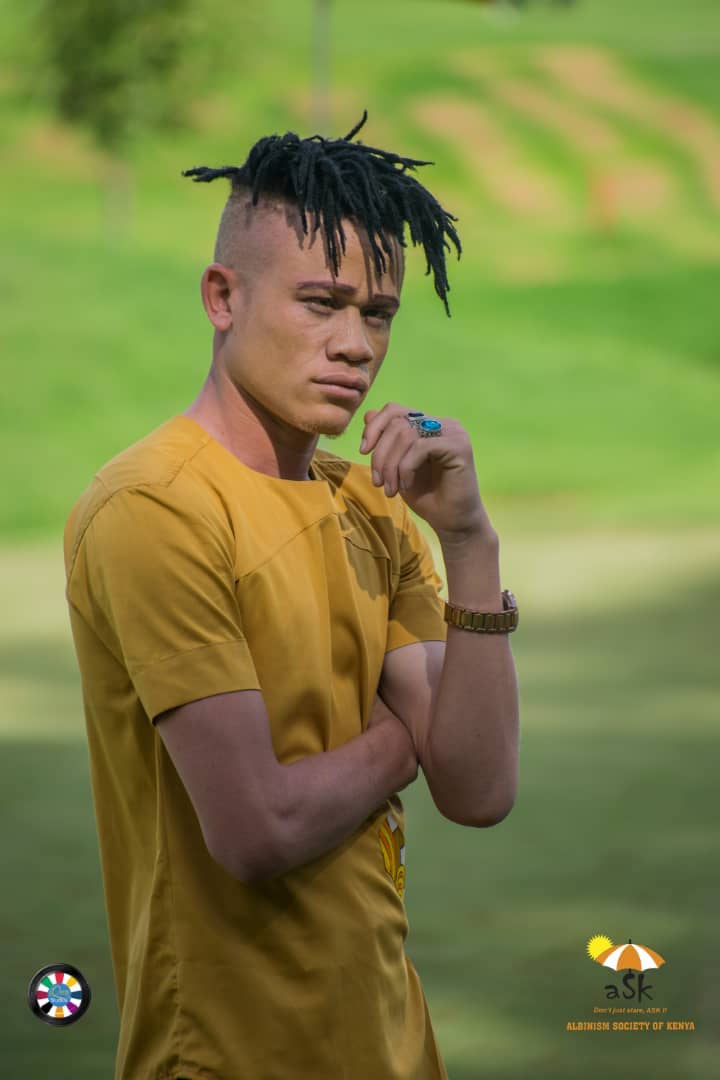 His account of the different issues he faced as a student highlights why so many children with albinism are forced to leave school at an early age. ‘Attending school was another challenge, due to the long distance between home and school. I always arrived late for classes since, unlike the other school-going children, I couldn’t leave home for school until it was 6.30 a.m., in the safety of broad daylight. There was a lot of bullying and name calling in school, plus there were no viewing aids to support my poor vision. The school teachers were equally not understanding of my situation and subjected me to severe punishments every time I arrived late for classes. Eventually, with consent from my dad, I abandoned my education and stayed under the safety of my home and family.’

In addition to cracking down on the killings, the government of Tanzania has built schools and protection shelters for children with albinism in hotspot zones. However, Emmanuel does not think people with albinism are out of danger yet. ‘We have been thrown a lifeline, but as long as the prejudice, stigma and discrimination carry on, it will count for nothing. We still feel, under the cover of darkness, we can get hurt because the social attitudes that fuelled the first wave of abductions are still in place. After years of neglect and being regarded as wicked, we are still traumatized. The general public and a great number among us [the people with albinism community] are still ignorant of albinism and that explains why the majority are not in school; why sun screens and viewing aids are not available to people with albinism; and why skin cancer continues to eat up people with albinism. We are still being called “ghosts” and all sorts of degrading remarks on the streets and in our communities.’

Although digital platforms and mobile technologies have grown exponentially in Africa, thereby stretching further the limits of human interactions, this is not necessarily the case for people with albinism. According to Emmanuel, the abuse, name calling and stalking that people with albinism experience on the streets has gone online too, unabated. Given the fact that cyber-hate crime monitoring is yet to be mainstreamed as a way of identifying and reporting the existence and scale of the problem, Emmanuel’s experience is no doubt common.

As an albinism ambassador, he spends a lot of time online. He reveals that, although it is difficult to determine how prevalent it is, online abuse targeting people with albinism is persistent. ‘I am very fortunate that I have come this far in life and to be appointed Mr Albinism East Africa, [that] exposed me and built my confidence to engage on all platforms and earn the respect of the public. But not all people with albinism are as lucky. We still go through a lot of stereotypical and veiled attacks on a daily basis, whether on or offline. Because people with albinism [are] a deprived group, we rarely engage online but when we do, we are “greeted” by the same offline debasing remarks.’

As people with albinism are still regularly targeted with hate speech, their main recourse is to attempt to block perpetrators on an individual basis or conceal their identity. ‘As a coping mechanism, you can delete the entire post that has received a cruel comment and post afresh, or if it’s a sustained attack, you block the account. Other times, for fear of being targeted, people with albinism will simply not use photos of themselves on social media. Instead photos of objects like vehicles, mountains, memes or animals will be used. That way you remain anonymous and won’t attract the attention of hateful people.’

Emmanuel argues that the situation of people with albinism in Tanzania will only begin to change once the long-standing myths around albinism are successfully dismantled, a caring environment is created and equal opportunities are extended to all. As a music artist, he wants to see people with albinism making it in the music industry — not on the basis of singing about albinism but on conventional issues such as relationships, love and conscience. That, he believes, will boost the self-esteem of people with albinism and the public perception of them will change, too. To this end, Emmanuel dreams of starting a music group of East African artists he competed with at the regional Mr and Ms Albinism contest in Nairobi.