Minority Rights Group > Programmes > Programmes > Evaluations > A partnership for all: Developing strategies for socio-economic cooperation between Roma communities and local authorities in Ukraine

A partnership for all: Developing strategies for socio-economic cooperation between Roma communities and local authorities in Ukraine 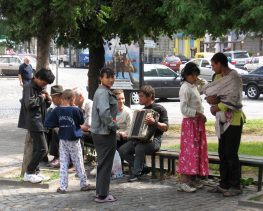 This programme aimed to support Roma minority communities to participate in democratic reforms and policy processes. We wanted to improve their job, education and health prospects as well as their access to human rights. The programme aimed to improve engagement and dialogue between Roma mediators, community leaders and civil society organizations (CSOs) and local, regional and national authorities in order to increase awareness of the various development issues Roma face.

There are an estimated 400,000 Roma living in Ukraine and this community is one of the most marginalized and vulnerable population groups in the country. Many have been forced from their villages and experience violence and discrimination as a result of their ethnicity. They face barriers in accessing health care, education, social benefits and formal employment, and experience poor living conditions and low life expectancy (up to 10-15 years lower than average). Overall Roma people are effectively denied the most basic social and economic rights and are largely excluded from decision-making processes, particularly in rural communities.

Unequal distribution of resources and state budgets do not favour the Roma community and this has created mutual mistrust and blaming between Roma communities and public institutions. Roma CSOs have limited knowledge and capacity to engage with decision-makers and effectively defend and promote the interests of their communities.

MRG therefore sought to improve consultation mechanisms through monitoring and policy dialogue between decision-makers and Roma representatives and ultimately strengthen minority organizations’ capacities to advocate at the national and regional level.

This external final evaluation visited project beneficiaries in large numbers and also spoke with local authority staff who had been involved.

Overall the report ‘proved that the project and its sub-granting framework were generally successful. The initial expectations based on the information about the sub-granted projects provided by the MRGE were true. The project objectives were consistent with the main problems of Ukraine’s Roma population. The project outputs conformed to the project aims. The achievements of the project were compliant with the complexity of the addressed problems and the available resources. The project revealed that the most of the problems related to the situation of the Roma population could be handled locally through the cooperation between the authorities and Roma activists.’

Looking at activities and results in more detail another finding was that:

‘the project showed a successful model of cooperation between an NGO, Roma mediators and state bodies – social services, Kyiv Regional State Administration. In some cases, similar to Kharkiv, existed, most urgent problems were resolved (e.g. assistance with documents to send children to pre-school class; documents for children helped to received social support). Project helped to identify Roma problematic, provided with realistic numbers and thus, more targeted approach is being used in order to plan budget and activities at the regional level. Once again, like in Kharkiv, the model of state bodies-mediators-Roma community proved its efficiency and thus suggested by the state bodies to be used in the future. the representative of the Kharkiv Regional State Administration acknowledged that social services would have never been able to collect such an information.’

‘The efficiency of the projects’ implementation in the region has been proved to be high, especially considering the level of collaboration with local administration at the regional and local levels, and their interest and support in addressing Roma issues. It is hard to evaluate if such a collaboration is a result of the MRGE sub-granting project or previously established contacts within the activities of the NGOs. Nonetheless, MRGE sub-projects are very timely (considering the Roma Strategy for 2013-2020) and do not only addressed the most acute problems, but also provide solution for some of them. Specifically, the Social Atlas project was also highly evaluated by the national governmental bodies (Director of the Department for Religious Affairs and Nationalities at Ukraine’s Ministry of Culture) as well as by international organizations (the CoE, UN Women Ukraine), as it solves the problem with lack of reliable data on Roma population in Ukraine which prevents from adequate measurement of implemented activities.’

The evaluation notes that not all the projects implemented were as successful and that some relied partially or were extensions of previous phases of work (in which MRG was not involved.) It also notes that MRGE’s visibility in the project was low – this is not unexpected as MRGE prefers that members of minority communities and minority-led organisations become more visible  when we work together. ‘However, as in many other presented cases the visibility of MRGE as such is very low and in this particular case MRGE is overshadowed by Chiricli.’

‘In Odesa region, the project pushed forward the dialogue between the Roma activists and local authorities in the Berezivka and Lyman districts; it also provided for the first steps in constructive communication with the Izmail DSA, which previously had been demonstrating a generally negative attitude towards Roma and a reluctance to engage in any discussions. The project once again clearly demonstrated the need of training Roma activists both to the leaders of Roma CSOs and local authorities. The project reaffirmed for the regional and local authorities the persistence of international concern about the Roma issues in Ukraine. The project activities have brought about new topics such as the potential role of the Roma in the municipal reform and in the electoral process.’

Local ownership of the projects is confirmed by many elements continuing to run after the project concluded: ‘In the second half of 2019, all the three Roma organizations of the Odesa province have already demonstrated that they continue the activities they had started during the project. The Charitable Fund Planet of Kind People continues the dialogue with local authorities in Berezivka on identity papers and the legal registration of property as well as other issues; the Fund also maintains a small training centre for youth in a private house. The Roma Human Rights Centre and the Charitable Fund Planet of Kind People keep on working on the introduction of the institution of Roma advisors (instead of mediators) at the bodies of local self-government. The Danube Roma Organization is extending conflict mediation and reconciliation onto other schools of the region. The Roma Human Rights Centre and the Danube Roma Organization keep maintaining the offices for legal counselling in Odesa and Izmail on the basis of lawyers’ volunteering.’

Finally, it is pleasing to note that ‘At the meeting devoted to the presentation of the [Ukraine National] Roma Strategy implementation several projects implemented under MRG sub-granting were presented [identified independently of the project] as exemplary.’