Fighting against all forms of discrimination in Tunisia 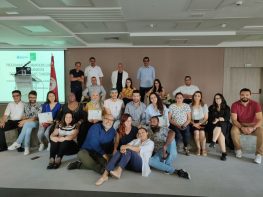 The general objective of this project is to promote the rights and strengthen the position of discriminated groups within Tunisian society, including all minority groups such as black Tunisians, sub-Saharan migrants, the LGBTQI+ community, religious minorities, Amazigh and persons with disabilities.

We are working on two complementary axes:

A better knowledge of these problems and an awareness on their part will make it possible to act on the evolution of the legislative framework and to work in favour of a better protection of the rights of minorities, to reinforce their position within society, and thus to consecrate the constitutional principle (art. 21) relating to the equality between Tunisian citizens. Promoting a non-stigmatising political and media discourse when it comes to these groups is also essential in order to raise awareness about these issues in the Tunisian society as a whole.

In the continuity of the project ‘Tackling Multiple Forms of Discrimination in Tunisia’, the ‘All for All’ project will allow to continue to subsidise the network’s member organizations during the first year of its implementation. The objective is to sustain the work of these organizations within the O3DT during the second year of the programme.

Since October 2020, the O3DT member organizations have adopted the system implemented for the identification, documentation, monitoring and analysis of discrimination cases collected by the PAD network in order to create a single database under the responsibility of the Association pour la promotion du droit à la différence (ADD), where all cases are being recorded and made accessible to the lawyers of the legal clinic that was set up in the framework of the PAD project, effectively enabling the continuation of the latter.

In this way, by sharing the data collected by the PAD network and the regional O3DT centres, all partner organizations will be able to detect, document and follow up on a greater number of cases of discrimination throughout Tunisia, enabling the clinic’s trained lawyers to take on more cases.

Unlike other Northern African countries, Tunisia appears to be a relatively homogenous society and has always identified as an Arab-Muslim country. This supposed homogeneity however conceals the diverse reality of the Tunisian society, within which many minority groups and communities remain on the fringe of society and are often highly affected by discriminatory practices and policies. Two of the most oppressed minority groups in the country are the LGBTQI+ community, who suffer from harsh repression and discrimination, and the black Tunisians, who represent about 10 to 15 per cent of the total population and often live in remote and isolated areas. Despite the 2011 revolution, the new 2014 Constitution and efforts from the civil society, Tunisia continues to be discriminatory towards minorities, both in policy and practice.

Sexual orientation and gender identity are very sensitive issues in Tunisia, with serious human rights violations perpetrated by the State such as arbitrary arrests, ill treatment and torture against people suspected of being homosexual or transgender. This situation is in part due to Tunisian legislation, with article 230 of the Criminal Code criminalising homosexuality with up to three years of jail (although this article is in theory anti-constitutional). In addition to this legal framework repressing LGBTQI+, strong common beliefs and hatred acts persist within the Tunisian society, further leading to the extreme exclusion and marginalisation of the LGBTQI+ community and to violence within private contexts such as the family environment.

Regarding racial discrimination in Tunisia, there is very little data on the issue affecting ethnic minority groups in the country. This lack of data highlights the level of negligence of such issues and the treatment of people from these minority groups, too often considered as ‘second zone’ citizens. For instance, despite the high participation of these minorities alongside majority groups to the 2011 revolution, they were not included by the media in video, audio and photo documentaries about this period of national history.

A law criminalising racial discrimination was passed by the Tunisian Parliament in October 2018, thus representing a landmark moment in the fight against racial discrimination. However, in their daily life, black Tunisians continue to be excluded from the public sphere: they are almost absent from the Parliament and most government and administrative institutions. This is in part due to their interlinked exclusion from education and employment.

Our partner is the Association pour la promotion du droit à la différence (ADD) with all the members of the O3DT, to fight against all forms of discrimination. Launched by ADD in April 2018, the O3DT now includes 64 organizations and two collectives:

The ‘All for All’ project’ is funded by the Dutch Embassy in Tunisia.

Photo: One of five trainings aimed at Tunisian lawyers on the fight against racial discrimination run by MRG and OHCHR Tunisia, with the collaboration of representatives of the Anti-Discrimination Points. Tunis, July 2020. Credit: MRG / Pauline Pascal.

This content is the sole responsibility of Minority Rights Group International and can under no circumstances be regarded as reflecting the position of the Dutch Embassy in Tunisia.