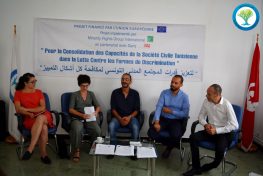 Unlike other Northern African countries, Tunisia appears to be a relatively homogenous society and has always identified as an Arab-Muslim country. This supposed homogeneity however conceals the diverse reality of the Tunisian society, within which many minority groups and communities remain on the fringe of society and are often highly affected by discriminatory practices and policies. Two of the most oppressed minority groups in the country are the LGBTQI+ community, who suffer from harsh repression and discrimination, and the black Tunisians, who represent about 10 to 15 per cent of the total population and often live in remote and isolated areas. Despite the 2011 revolution, the new 2014 Constitution and efforts from the civil society, Tunisia continues to be discriminatory towards minorities, both in policy and practice.

Sexual orientation and gender identity are very sensitive issues in Tunisia, with serious human rights violations perpetrated by the State such as arbitrary arrests, ill treatment and torture against people suspected of being homosexual or transgender. This dire situation is in part due to Tunisian legislation, with article 230 of the Criminal Code criminalising homosexuality with up to three years of jail (although this article is in theory anti-constitutional). In addition to this legal framework repressing LGBT, strong common beliefs and hatred acts persist within the Tunisian society, further leading to the extreme exclusion and marginalisation of the LGBT community and to violence within private contexts such as the family environment.

Regarding racial discrimination in Tunisia, there is very little data on the issue affecting ethnic minority groups in the country. This lack of data highlights the level of negligence of such issues and the treatment of people from these minority groups, too often considered as ‘second zone citizens.’ Despite the high participation of these minorities alongside majority groups to the 2011 revolution, they were not included by the media in video, audio and photograph documentaries about this period of national history. A law criminalising racial discrimination was passed by Tunisian Parliament in October 2018, thus representing a landmark moment in the fight against racial discrimination. However, when it comes to daily life, black Tunisians continue to be excluded from most public spheres: they are almost absent from the Parliament and most government/administrative institutions in general. This is in part due to their interlinked exclusion from education and employment.

Our partner is Damj, a Tunisian organization working towards justice and equality.