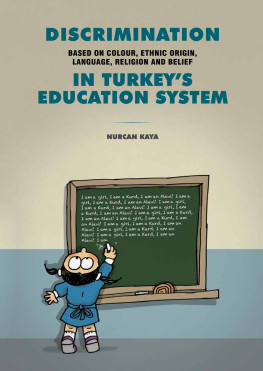 This evaluation examines a project that Minority Rights Group (MRG) conducted in partnership with the History Foundation between March of 2014 and October 2015. The project was primarily funded by the European Union, as well as the UK Foreign and Commonwealth Office. The ultimate goal of the program was to strengthen minority civil society’s involvement in the monitoring of discrimination within the Turkish education system, and in turn increase their capacity to advocate for changes in this area at the local and national levels. The target groups included civil society organization representing ethnic, linguistic, and religious groups. The project also intended to strengthen the capacity of and collaboration among minorities, civil society organizations, and activists to campaign on the issue of discrimination in education, and increase the quality and timeliness of the information available on this topic. Finally, it sought to increase awareness among decision-makers at all levels of discriminatory practises, focusing on issues of race, religion, ethnicity, and language within the education system.

This project was undertaken during a period of challenging socio-political context, including three elections, deteriorating public security, increasing tension in international politics, and regression of democratization efforts. Overall, it was observed that the project was managed effectively and implemented seamlessly to reach its intended outcomes, and MRG adopted insightful approaches to obstacles in the face of risks. With this in mind, “the unexpected political developments beyond the control of MRG and HF have hampered project’s advocacy activities […] Nevertheless the launch activities and panels have been important to bring visibility to the report and its findings, and to reach to wider audience’s via media.” The evaluation concludes that the project made some vital contributions towards “achieving grassroots mobilization for monitoring discrimination in the education system, particularly in the long term”.

Some suggestions to come out of this evaluation include a desire for a second phase to the project in order to resume working with the partner NGOs who were most engaged in the project. Additionally, the evaluator felt that even if the donor could not fund long phases when undertaking project design, phases should be planned to cover a minimum of 5 to 6 years so that results like skills, knowledge, motivation, and mobilization will not be lost due to long pauses between phases. Finally, it is also important to integrate measures of sustainability and multiplier effect into project design to ensure that partner’s own knowledge is utilized for maximum efficiency and that the approaches are relevant for their needs.

Read Discrimination based on Colour, Ethnic Origin, Language, Religion and Belief in Turkey’s Education System,  a report produced under this programme.