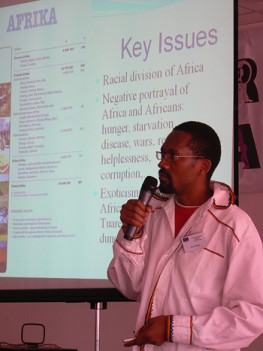 Emma Eastwood, MRG’s Media Officer, wraps up her work in Budapest and is left with some food for thought

Apparently there was a reassuringly strong presence from the anti-racists yesterday afternoon at the demo – even former German chancellor Gerhard Schroeder showed his face, along with the Hungarian Prime Minister (who some here accuse of scoring political points from the whole affair). Maybe they feared a repeat performance from the extreme right, who went on the rampage a while back and ‘trashed the city’… I saw some photos of the riots later at a photo exhibition in the Hungarian National Museum, the Hungarian Guard, a right-wing group leading the movement, is sinister and of great concern, but frankly I must admit that I find the penchant of neo-Nazis for quasi-military uniforms and dodgy insignia both ridiculous and absurd.

Tracey, from Hungarian NGO Védegylet, paints a different picture of Slovenian society from the journalists I spoke to yesterday. She tells me that the Slovenian activists she’s met are some of the most inspiring and positive people in the region. On a different note she’s a fellow vegetarian and we have an ‘interesting’ discussion over lunch with Angela, an expert on rights and development from Brussels and Esther from the Uganda Land Alliance (who are both speakers at the event), defending the concept that animals have rights too. 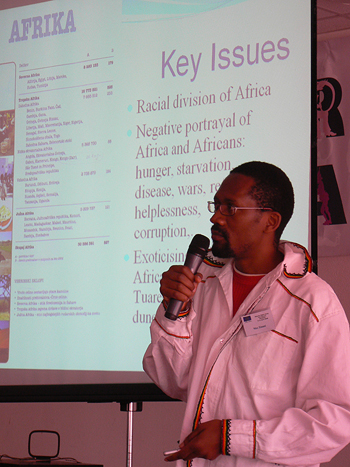 Max Slimani, from the Africa Centre in Slovenia, provides one of the most thought-provoking presentations of the seminar today. He provides us with examples of how in many countries in the EU stereotyping of Africans continues apace in children’s books and educational materials. Max is a commanding speaker and I can sense that he makes many of us squirm in our seats as we remember with a shudder the textbooks of our childhoods – despite the UK today having one of the most enlightened school curricula in the EU in terms of global education, Little Black Sambo and golliwogs were still around when I was a girl. MRG is well aware that these stereotypes entrench prejudice from an early age and has incorporated educational reform into its own campaign goals.

Talking of campaigning I’ve heard of some real creative and inspiring examples from many of the NGOs here. An old favourite of mine, Critical Mass, a global direct action movement of cyclists, attracted some 35, 000 people in its last incarnation in Budapest (although Tracey tells me that the crowds of cyclists aim to cause as little disruption as possible – quite the opposite of my own experience of actions in San Francisco and London). How they manage that with so many people beats me…

The seminar draws to a close this afternoon and I relish breaking out of the bubble of the last few days and the feel of the wind on my cheeks as I cross the Danube on Margaret Bridge. The truth is it’s been a privilege to meet so many people doing such diverse work in so many countries, which should certainly help when I’m churning out press releases back at my desk on Commercial Street.