Minority Rights Group > News > Blogs and podcasts > “Promise change, but make sure it always stays the same”: how “a regional pattern of authoritarian temptation” in the Balkans isn’t being tackled by Europeanization

“Promise change, but make sure it always stays the same”: how “a regional pattern of authoritarian temptation” in the Balkans isn’t being tackled by Europeanization 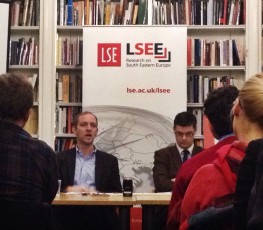 In late January the lecture: “The Crisis of Democracy in the Balkans. The interrelationship between Europeanization and the New Authoritarian Temptation” by Professor Florian Bieber, visiting from the University of Gratz in Austria, took place at the LSEE (Research on South Eastern Europe branch of the London School of Economics). Vanessa Mazzei, MRG’s Publications and Communications intern, reports back.

What you’ve just read are the 10 rules that in Professor Bieber’s opinion, Machiavelli would write today for the “Balkan Prince”. The talk was in fact opened with the reading of a few passages from the political theorist’s “The Prince”, the political treatise in which the 16th-century Italian diplomat advises on how to manage supreme political power, and basically, on how to tyrannize. This renaissance piece of writing has often been applied to modern day political situations, and after having had to study it myself so thoroughly in high school in Italy, I found great pleasure in ‘hearing’ Machiavelli’s words again and in better understanding the resonance they have in the 21st century.

Why the “Balkan Prince”? Because the Balkans are experiencing “a regional pattern of authoritarianism”: the rise of governments that are seriously undermining democracy. The greatest paradox is that most of these (like Serbia, Montenegro, and Macedonia) are negotiating access to the European Union. How can we explain this tension lying between EU accession on the one hand and apparent deficiencies when it comes to democracy on the other? And where is this crisis in democracy in the Western Balkans coming from?

Professor Bieber started by explaining the origins of this impasse. In the 1990s the Balkans experienced a democracy crisis, but many of the parameters that permitted those regimes are no longer in place today: there are no wars to be fought, media has been privatized, and such easy election fraud is no longer possible. At the start of the new millennium we saw a short move to democratization that only really lasted three or four years, and then stagnated. The results are clearly visible today: there is still strong party control over public administration and, most importantly, laws are seen as mere guidelines. These elements, in the Professor’s view, show that there exists a structural continuity with the past that “has enabled the return or the strengthening of more authoritarian approaches” in recent years. For many years a perfect example of the penetration of the state was to be found in Montenegro, where the government building was actually owned by the ruling party; fortunately, that is now no longer the case.

But why do people vote for parties with these tendencies? There are two reasons: the first is that experience suggests no politician is able to keep their promise of economic transformation; and the second is that ideology isn’t something that matters in this region. Party affiliations in most countries of South Eastern Europe serve exclusively to allow them to network with other European parties, and not to define the ideological positions domestically. Therefore, citizens are left with making the most rational choice: accepting what is offered to them in exchange for electoral support, which is either money or a job. The vast majority of the population sees ideologies and policy platforms as nothing other than a way to disguise how parties will obtain and maintain power.  On the subject of maintaining power, in this region the means employed in order to do so have also changed over the decades. In the socialist period politicians used ‘nationalism’ to unite people and in the 1990s they used the ‘fight against corruption’, while nowadays parties in the Balkans have discovered the ‘use of reforms’ as a rhetorical tool. Machiavelli was already well aware of this back in the 16th century: “the use and need of grand projects to draw attention away from the structural deficiencies of the system”.

The lecturer then went on to bring the European Union into this equation, pointing out that, unfortunately, there are structural mechanisms which allow the EU to empower some of these tendencies in the Balkans. An example of this is that the EU has a burocratic rational approach which entails addressing only state institutions and not political parties, towards countries which structurally suffer from the penetration and control of the former by the latter. Political parties are hardly mentioned in EU reports. Professor Bieber argued that they are probably “the single most important actor in the countries of South Eastern Europe”; as whether democracy functions or does not function depends largely on how these behave.

The professor believes that the main obstacle to the EU’s incisiveness seems to be, that by disaggregating democracy into so many components, as it does in its reports (e.g. the rule of law, the independence of the judiciary, how civil society is participating), it ends up giving positive answers when analyzing whether these are functioning properly. If, however, one looks at the larger picture, it is immediately obvious there are considerable flaws in the overall systems of these countries. There is no realistic assessment in these documents of what is actually happening. Therefore, whilst one can understand that the EU is trying to keep these processes going, one cannot but notice from its behaviour the exculpation it is providing for some of the practices that the professor referred to as “authoritarian”.

In closing, Professor Bieber offered a few crucial points towards the understanding of the trap taking place in the Balkans. First of all, these tendencies are structural; they are not based on one particular party or leader, but on the way in which the parties and the state have become inextricably linked. The lecturer argued that, in some of these countries, the party control over the state is greater now than in socialist times. Secondly, the game is no longer about nationalism. Talking about nationalism is a common misleading debate in the Balkans. Thirdly, this situation requires reconsideration of the way in which the European enlargement process operates. In conclusion, the academic stated that even though these governments suffer from two main inherent tensions (mainly, talking about EU integration but not actually wanting to be part of it, and having to play by libertarian rules but not actually believing in democracy), and are therefore playing a dangerous game, one cannot expect a potential failure of theirs capable of drastically changing the circumstances. There is often a misplaced understanding that a natural progression exists towards liberal democracy, although also a regression or stagnation can develop. He concluded by saying: “The belief that the fall of any of these governments could usher in the structural changes which will lead to a development of democracy in the region, moving towards more liberal democracy by itself, is, unfortunately, slightly naïve.”

So it seems that historical patterns have become “confining conditions”, that continue to undermine the establishment of proper democracies in the region. Professor Bieber explored how these practices affect the wider population, by creating a general sense of disempowerment amongst them, a feeling that they do not have the possibility to change things. But what effects do these tendencies in the Balkans have on minorities?

As stated in the EU publication Mainstreaming human and minority rights in the EU enlargement with the Western Balkans, to which Professor Bieber contributed, minority rights tend to be treated in similar ways across the region. For example, Croatia, Serbia and Kosovo are in very different stages of political transformation and of proximity to EU membership, although all three countries have produced elaborated and detailed legislation in order to secure the inclusion of minorities. So how come minorities aren’t fully included? Like for most issues in the Balkans, and examined in the lecture, there is only one answer: lack of IMPLEMENTATION.

Although there are various factors that can account for this discrepancy (insufficient societal support for the legislation, small size or insufficiently organised minority community, insufficient monitoring of implementation at local level, etc.), implementation ultimately depends on the state. Countries which need to combat corruption tend to be, by nature, very adverse to any influence from the outside world, and try to shut out anything they fear could bypass their authority. Therefore, being laws in the field of minority rights often the result of external pressures and intervention, the appropriate level of domestic commitment to secure full implementation is often not given by these governments.

The Roma find themselves in an even worse situation than the rest of the minorities in the region. Insufficient access to education, discrimination in employment from private and public sectors, as well as open xenophobia and racism are added to the fact that the legal mechanisms for the protection of national minorities remain inadequate for addressing the needs of this community and significant aspects of the legislation don’t even benefit them.

Of course the structural mechanisms of the EU approach that are enabling certain tendencies in the Balkans are the same ones that are allowing EU minority recommendations to not be put into practice in an effective way. The deficits that emerged the most are: “that minority related short term priorities were just not realistic in terms of the timeframe; that they have been framed in such a broad way that the wide room of manoeuvre granted to the states impeded an effective implementation; and that the political climates in the countries concerned just undermined the implementation of the priorities”. Generally speaking it is blatant that a pro-active approach towards minority rights in the enlargement policy is missing: they have not been treated specifically, but instead have been included under the political criteria section and hardly in any other chapters of the reports.

In conclusion one thing is certain: a government which aims at maintaining its population powerless and voiceless will definitely never risk any loss of sovereignty by trying to put into practice minority rights, whoever might be the external forces that are advocating towards their implementation.

Comments are closed.
Filed Under: Balkans