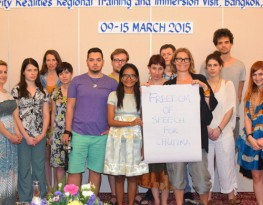 The Thai authorities should immediately drop all charges against two journalists on trial for reporting on the human trafficking of Burma’s Rohingya people, Minority Rights Group International (MRG) said as court proceedings began on Tuesday.

The two journalists, Alan Morison and Chutima Sidasathian from the local Phuketwan news website, face up to seven years in prison for citing a Reuters report accusing the Thai navy of complicity in the trafficking of Rohingya.

In April 2014, the Thai navy charged Phuketwan under the country’s criminal defamation laws and computer crimes act, carrying a maximum penalty of two years and five years in prison respectively, as well as a fine of 100,000 baht (£1,900). Reuters has not been charged.

‘The prosecution of these two journalists is the latest example of Thailand’s escalating war on free speech,’ said Carl Söderbergh, Policy & Communications Director at MRG. ‘The Thai authorities are sending a clear warning to journalists who dare investigate official abuses of minorities and refugees: either back off or face jail.’

Since 2012, an estimated 100,000 Rohingya Muslims have fled western Burma, where they are denied citizenship and persecuted by the government, as religious tensions in the Buddhist-majority country have escalated. But the Thai government continues to treat most Rohingya arrivals as ‘illegal migrants’ and some 500 Rohingyas remain confined to squalid detention centres.

In early May, the Thai government launched an aggressive anti-trafficking campaign following the discovery of mass graves at smuggling camps in the southern provinces. However, Thailand refused to open its borders* to thousands of migrants and refugees who were cast adrift in the Andaman Sea shortly after the crackdown.

Dozens of police officers and one army officer has been implicated in the investigation, but critics say that most senior officials have not been targeted. It raises concerns about the Thai junta’s sincerity in stemming the crisis.

‘If Thailand is serious about tackling human trafficking, they should be investigating allegations of official complicity rather than hounding journalists for doing their jobs,’ added Söderbergh. ‘Instead of silencing those who expose human rights abuses, the Thai government should focus its energy on boosting protection for Rohingya refugees and other vulnerable minorities seeking refuge in Thailand.’

*As of November 2020, the news article previously referred to here seems to have been taken down permanently.