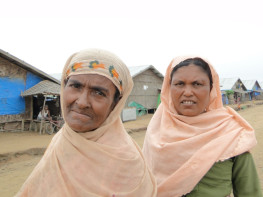 Minority rights and inclusion must be placed at the centre of Burma’s landmark general election scheduled for 8 November 2015, Minority Rights Group International (MRG) said today. Otherwise, there is a very real risk that ethnic and religious tensions will intensify as a result of the process.

The election is expected to mark Burma’s first democratic transition of power since the military seized power through a coup in 1962.

But the mass disenfranchisement of millions of ethnic and religious minorities has raised serious concerns about the integrity of the poll, while clashes between the military and armed groups in Burma’s border regions have escalated in recent weeks. Only eight armed groups signed a tentative and controversial nationwide ceasefire agreement in October.

“The November election is a major opportunity for Burma’s leaders to promote ethnic reconciliation and pluralism,” said Carl Soderbergh, Director of Policy & Communications at MRG. “However this can only be done if all parties agree to prioritize equality and human rights for everyone in Burma, regardless of ethnicity and religion.”

The exclusion of nearly one million Rohingya Muslim voters and dozens of Muslim political candidates across the country has set a dangerous precedent ahead of the poll.

There are worrying signs that the ruling Union Solidary and Development Party and Aung San Suu Kyi’s National League for Democracy are pandering to pressure from a thriving Buddhist nationalist movement. In August, President Thein Sein approved the last of four deeply discriminatory laws intended to “protect race and religion” in the Buddhist-majority country. The new legislation curtails the rights of Muslims and risks exacerbating religious tensions at a precarious time in the country’s political transition.

Voting has been cancelled in numerous constituencies in Burma’s conflict-torn borderlands, disenfranchising millions of other ethnic minority citizens. Civil society groups report that the military has escalated its offensive against armed ethnic groups that refused to sign a nationwide ceasefire deal last month, seemingly as a punitive measure.

The Burmese military, which is guaranteed 25 percent of seats under the 2008 Constitution, still controls a number of key government agencies and holds an effective veto over political reform. Thorny issues such as federalism and transitional justice remain largely unaddressed.

Burma is one of Southeast Asia’s most diverse countries, with nearly 40 percent of the population belonging to an ethnic minority or indigenous population. Burma currently ranks as number eight on MRG’s Peoples Under Threat index, which identifies the countries most at risk of mass violence or even genocide.