Working together to eradicate statelessness in the Dominican Republic 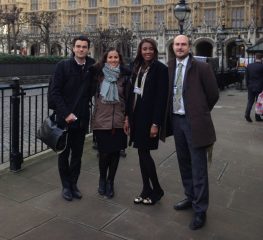 Marcelo Hinojosa, who interns with MRG’s Cultural Programmes team, reports back from an event marking the one year anniversary of the London launch of UNHCR’s worldwide #IBelong campaign to end statelessness by 2024.

A few months ago Rosa Iris Diendomi, a Dominican lawyer of Haitian descent and member of the social movement Reconoci.do, was travelling in a guagua, a local public bus, in the Dominican Republic. An immigration officer stopped the bus, and shouted, ‘All foreigners must present their ID documents.’ No one on the bus reacted…so the officer went straight to the darker-skinned people on the bus and asked them for their documents. They were all Dominicans….

Dominicans of Haitian descent have been facing discrimination like this for decades. Discrimination due to their skin colour, their French- sounding Haitian names, that prevented them from working and travelling, accessing basic education, health treatment and justice, even getting married or registering their childrens’ births. On paper they do not exist. A community that was born in Dominican territory when the Constitution specifically detailed that those born in its territory, unless in transit for a maximum of 10 days or children of diplomats, would automatically obtain Dominican nationality.

Rosa Iris was in the UK yesterday to attend an event which MRG, together with the All-Party Parliamentary Human Rights Group, had organized to raise awareness about statelessness and how it affects so many people around the world. The event focused primarily on the plight of Dominicans of Haitian descent, a situation that MRG has followed closely for years and is actively involved in.

The speakers stressed the importance of the international community combatting statelessness. Chris Nash addressed the issue using an international context, making reference to the ongoing refugee crisis in Europe. Laura, on the other hand, made direct reference to the situation in the Dominican Republic, explaining how constitutional rulings have affected Dominicans of Haitian descent, and giving examples of direct discrimination. Additionally, Laura highlighted how changes in the constitution, and finalization of the naturalisation processes, still have a major impact on the Dominican Haitian community, leaving thousands of people stateless.

The points raised were backed up by a more legal approach from Rosa Iris. Rosa assessed the government’s rulings and their legal consequences. Using empirical cases, it was proven how over 40,000 people are not recognized as Dominican or Haitians, literally making them stateless. Rosa Iris emphasized how the situation has been disastrous in the day-to-day lives of members of her community. Current conditions deprive them of jobs or social security benefits, as well as more simple things like using public transport or buying a phone.

Finally, the speakers recommended that public officials clearly differentiate between migrants and statelessness, to continue including statelessness in bilateral meetings, to share expertise and funding for anti-discriminatory programmes, and that local NGOs receive technical and financial aid to monitor and support stateless people.

Rosa Iris, despite the obstacles she and her community face, ended with a note of optimism, ’I believe that with the will of civil society, international organisations and the government, we can work together to eradicate statelessness in the Dominican Republic.’